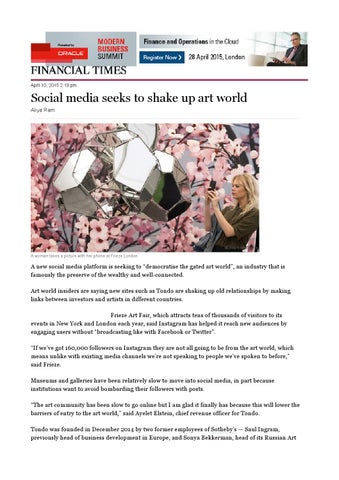 A woman takes a picture with her phone at Frieze London

A new social media platform is seeking to “democratise the gated art world”, an industry that is famously the preserve of the wealthy and well-connected. Art world insiders are saying new sites such as Tondo are shaking up old relationships by making links between investors and artists in different countries. Frieze Art Fair, which attracts tens of thousands of visitors to its events in New York and London each year, said Instagram has helped it reach new audiences by engaging users without “broadcasting like with Facebook or Twitter”. “If we’ve got 160,000 followers on Instagram they are not all going to be from the art world, which means unlike with existing media channels we’re not speaking to people we’ve spoken to before,” said Frieze. Museums and galleries have been relatively slow to move into social media, in part because institutions want to avoid bombarding their followers with posts. “The art community has been slow to go online but I am glad it finally has because this will lower the barriers of entry to the art world,” said Ayelet Elstein, chief revenue officer for Tondo. Tondo was founded in December 2014 by two former employees of Sotheby’s — Saul Ingram, previously head of business development in Europe, and Sonya Bekkerman, head of its Russian Art

department. Both had decade-long careers with the auction house before leaving in 2013 to follow “opportunities that are still untapped by the mainstream”. Ms Bekkerman said Instagram showed her the “art world is dying to engage”. Indeed Instagram said the number of “InstaMeets” — where users host events and take photographs together — is growing. Tondo has attracted more than $1m in investment and 32,500 users from countries including the US, UK, Russia, Israel and Spain. “A lot of people are lured by art but when they want to make an investment or just buy something, [magazine] editorials don’t tell them where to put their money,” said Ms Elstein. Tondo does not either, but by encouraging artists and specialists from galleries, fairs and auction houses to post about their work, it hopes to make insider knowledge “egalitarian, democratic and accessible to everybody”. Not everyone believes it can. “Tondo is just another way of flattening art and asking artists to create a brand instead of making work,” said one artist on condition of anonymity. “Of course no one will come out and say this because artists all know each other.” But Whitechapel Gallery, which has been among the first to engage with various digital platforms and calls itself “the artists’ gallery for everyone”, says Tondo offers an opportunity to tailor its message. “Social media is one of the many ways we communicate our extensive programme . . . we joined Tondo in February and are excited to see how [it] continues to grow and develop over time,” said the gallery. Pedro Font Alba and Bruce Irwin, who run Scan Arte, a network that promotes emerging Spanish artists internationally, have used Tondo to meet collaborators including an art consultant who now advises the group on Colombian work. “What is important to us is that the online and offline worlds are complimentary, that what happens online facilitates what is happening offline,” Mr Alba said. “Not only are we finding artists but they are finding themselves by forming a web of connections.” Mr Alba and Mr Irwin said it remains to be seen how Tondo will fuel that content when the platform grows. “One of the best things right now is [that] Tondo is small — we know Ayelet’s posts . . . I wonder how they can keep that community and not become just another social media giant.” RELATED TOPICS Social Media, London

© THE FINANCIAL TIMES LTD 2015 FT and ‘Financial Times’ are trademarks of The Financial Times Ltd. Print a single copy of this article for personal use. Contact us if you wish to print more to distribute to others. 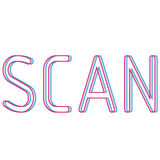 SCAN IN THE FINANCIAL TIMES

SCAN IN THE FINANCIAL TIMES