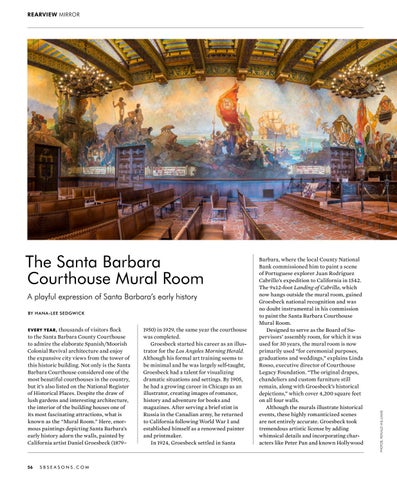 The Santa Barbara Courthouse Mural Room A playful expression of Santa Barbara’s early history BY HANA-LEE SEDGWICK EVERY Y EAR, thousands of visitors flock to the Santa Barbara County Courthouse to admire the elaborate Spanish/Moorish Colonial Revival architecture and enjoy the expansive city views from the tower of this historic building. Not only is the Santa Barbara Courthouse considered one of the most beautiful courthouses in the country, but it’s also listed on the National Register of Historical Places. Despite the draw of lush gardens and interesting architecture, the interior of the building houses one of its most fascinating attractions, what is known as the “Mural Room.” Here, enormous paintings depicting Santa Barbara’s early history adorn the walls, painted by California artist Daniel Groesbeck (1879–

1950) in 1929, the same year the courthouse was completed. Groesbeck started his career as an illustrator for the Los Angeles Morning Herald. Although his formal art training seems to be minimal and he was largely self-taught, Groesbeck had a talent for visualizing dramatic situations and settings. By 1905, he had a growing career in Chicago as an illustrator, creating images of romance, history and adventure for books and magazines. After serving a brief stint in Russia in the Canadian army, he returned to California following World War I and established himself as a renowned painter and printmaker. In 1924, Groesbeck settled in Santa

Barbara, where the local County National Bank commissioned him to paint a scene of Portuguese explorer Juan Rodríguez Cabrillo’s expedition to California in 1542. The 9x12-foot Landing of Cabrillo, which now hangs outside the mural room, gained Groesbeck national recognition and was no doubt instrumental in his commission to paint the Santa Barbara Courthouse Mural Room. Designed to serve as the Board of Supervisors’ assembly room, for which it was used for 30 years, the mural room is now primarily used “for ceremonial purposes, graduations and weddings,” explains Linda Rosso, executive director of Courthouse Legacy Foundation. “The original drapes, chandeliers and custom furniture still remain, along with Groesbeck’s historical depictions,” which cover 4,200 square feet on all four walls. Although the murals illustrate historical events, these highly romanticized scenes are not entirely accurate. Groesbeck took tremendous artistic license by adding whimsical details and incorporating characters like Peter Pan and known Hollywood

Santa Barbara Seasons is a resource for locals and visitors alike with lush visuals, engaging features and invaluable information on events, fundraisers, retail and culinary happenings. Every issue includes handy maps, restaurant and winery listings and a guide to the county's top destinations. Be prepared to discover something new about the region as we cover businesses and projects off the beaten track as well as the classic favorites. Contact the publisher at 805/564-8804. 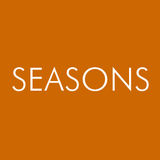