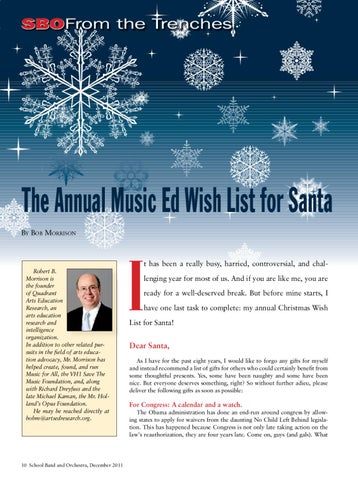 Robert B. Morrison is the founder of Quadrant Arts Education Research, an arts education research and intelligence organization. In addition to other related pursuits in the field of arts education advocacy, Mr. Morrison has helped create, found, and run Music for All, the VH1 Save The Music Foundation, and, along with Richard Dreyfuss and the late Michael Kaman, the Mr. Hollandâ&amp;#x20AC;&amp;#x2122;s Opus Foundation. He may be reached directly at bobm@artsedresearch.org.

t has been a really busy, harried, controversial, and challenging year for most of us. And if you are like me, you are ready for a well-deserved break. But before mine starts, I have one last task to complete: my annual Christmas Wish

Dear Santa, As I have for the past eight years, I would like to forgo any gifts for myself and instead recommend a list of gifts for others who could certainly benefit from some thoughtful presents. Yes, some have been naughty and some have been nice. But everyone deserves something, right? So without further adieu, please deliver the following gifts as soon as possible:

For Congress: A calendar and a watch. The Obama administration has done an end-run around congress by allowing states to apply for waivers from the daunting No Child Left Behind legislation. This has happened because Congress is not only late taking action on the lawâ&amp;#x20AC;&amp;#x2122;s reauthorization, they are four years late. Come on, guys (and gals). What

The December issue of SBO magazine.