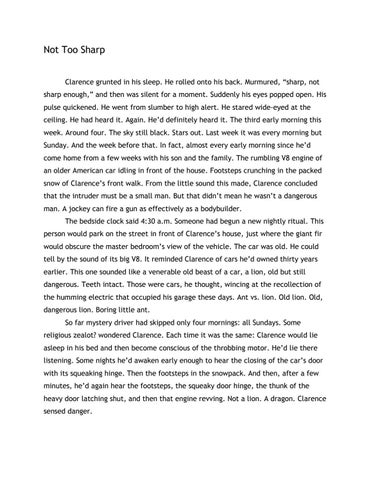 Not Too Sharp Clarence grunted in his sleep. He rolled onto his back. Murmured, “sharp, not sharp enough,” and then was silent for a moment. Suddenly his eyes popped open. His pulse quickened. He went from slumber to high alert. He stared wide-eyed at the ceiling. He had heard it. Again. He’d definitely heard it. The third early morning this week. Around four. The sky still black. Stars out. Last week it was every morning but Sunday. And the week before that. In fact, almost every early morning since he’d come home from a few weeks with his son and the family. The rumbling V8 engine of an older American car idling in front of the house. Footsteps crunching in the packed snow of Clarence’s front walk. From the little sound this made, Clarence concluded that the intruder must be a small man. But that didn’t mean he wasn’t a dangerous man. A jockey can fire a gun as effectively as a bodybuilder. The bedside clock said 4:30 a.m. Someone had begun a new nightly ritual. This person would park on the street in front of Clarence’s house, just where the giant fir would obscure the master bedroom’s view of the vehicle. The car was old. He could tell by the sound of its big V8. It reminded Clarence of cars he’d owned thirty years earlier. This one sounded like a venerable old beast of a car, a lion, old but still dangerous. Teeth intact. Those were cars, he thought, wincing at the recollection of the humming electric that occupied his garage these days. Ant vs. lion. Old lion. Old, dangerous lion. Boring little ant. So far mystery driver had skipped only four mornings: all Sundays. Some religious zealot? wondered Clarence. Each time it was the same: Clarence would lie asleep in his bed and then become conscious of the throbbing motor. He’d lie there listening. Some nights he’d awaken early enough to hear the closing of the car’s door with its squeaking hinge. Then the footsteps in the snowpack. And then, after a few minutes, he’d again hear the footsteps, the squeaky door hinge, the thunk of the heavy door latching shut, and then that engine revving. Not a lion. A dragon. Clarence sensed danger.

A magazine of literature, photography, and art. 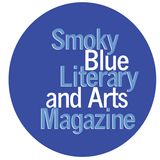