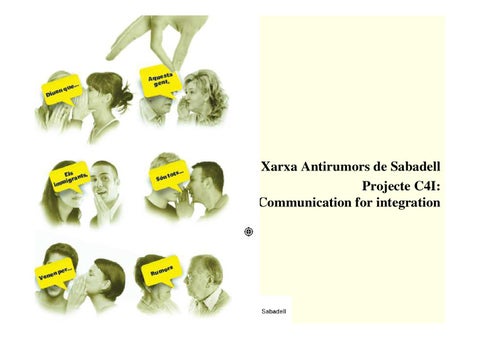 Sabadell with diversity 11.11% of the population are foreigners Evolution of the foreign population in the city: Since 2000 the city has experienced a significant change in its demographic composition due to the arrival of people from non-EU countries. From 2000 till 2011 the immigrant population grew from 1.0% to 12,9% of the total

The Department of Civil Rights and Citizenship was created in 2011 with the objective of developing a city committed to its values, a city where the citizens share rights and duties, that show solidarity and cooperate with other people, that act as hosts to newly arrived citizens with hospitality, that involve themselves actively in favour of equality between women and men or against any type of violence, that work in favour of personal autonomy and freedom, that are committed to the emancipation of youth and that, with affection, respect and austerity, believe that diversity and interaction are the basis of a living together.

The Department of Civil Rights and Citizenship is orientated by an overall general Plan (2011-2016). In particular, some of the planâ&#x20AC;&#x2122;s specific objectives are: a) b) c)

to develop the tools required to accommodate newcomers with the cooperation of local associations. promote active involvement in associations by newcomers by building a network that works for inclusion and diversity foster links to projects that put in place intercultural, inter-association and intergenerational strategies enhancing diversity and providing tools to combat prejudice; and to raise awareness among the public so that they can also tackle these prejudices by taking an active approach and providing the tools to combat them.

Background C41 project . In 2004 The coexistence commission was born in Sabadell to allow direct citizen intervention in case of violent actitudes in relation to xenophobia,racism,homophobia. The comission is composed of 30 people from institutions, associations and professionals, assesses and tries to find solution to any conflict that occurs in the city

Study to identify stereotypes and false rumours in the city

Time: The first semester of 2013 29 interviews with representatives of different local association 44 surveys of professionals of different city council departments

Study to identify stereotypes and false rumours in the city RESULTS: THE MOST WIDESPREAD RUMOURS

1. The abuse of grants and benefits 2. The misuse and abuse of the healthcare system 3. The negative impact due to the presence of immigrant workers in the jobs market 4. The negative impact of immigrant children in schools 5. That foreign traders do not pay taxes and receive more benefits from local administration 6. That they have interest in integrating into the town

Study to identify young people’s perceptions and attitudes towards foreigners in Sabadell (analyzing young people in the fourth District). • Identify negative rumours • Compare the results with previous project • Questionnaires based on 359 native residents between 16-29 years who are living in the fourth district

Study to identify young peopleâ&#x20AC;&#x2122;s perceptions and attitudes towards foreigners in Sabadell (analyzing the young people in the fourth district). RESULTS: THE MOST WIDESPREAD RUMOURS

Explaining the project to political groups and other council departments such as:

Explaining the project to other committee groups

Training Anti-rumour for civil servants. May 2014

ACTIVITIES FOR THE ELDERLY Vaccinate against the rumours workshop. May 2014

CITIZENSHIP ACTIVITIES Antirumours actions in the Equitable Trade Festival and Ethical Banking. May 2014

YOUTH ACTIVITIES 2nd course to train anti-rumour agents: September-October 2014 • To improve our knowledge of others and promote coexistence in diversity. • Reflections on the origin of rumors, stereotypes and prejudices about people who are different from me. • To provide tools and arguments to manage and fight widespread rumours in the city. Workshop with Sabadell youth social workers to define the anti-rumorus strategy to work with youth people. September

CITIZENSHIP ACTIVITIES Celebration of Diversity Day and the International Day of Migrants in the Human Rights Program. December 2014

• To improve our knowledge of others to promote coexistence in diversity. • Reflections on the origin of the rumours, stereotypes and prejudices about the other as a different person as me. • To provide tools and arguments to manage and combat widespread rumours in the city.

Video 2. Dismantle rumours in the area of education 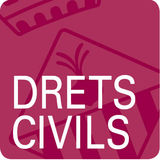