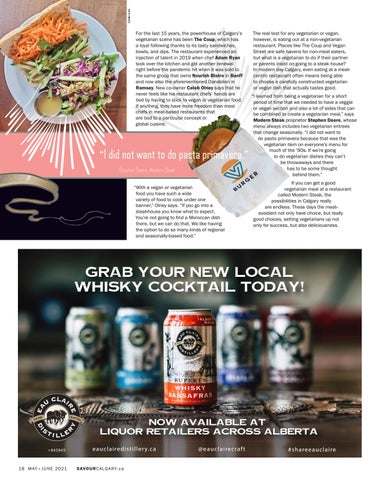 For the last 15 years, the powerhouse of Calgary’s vegetarian scene has been The Coup, which has a loyal following thanks to its tasty sandwiches, bowls, and dips. The restaurant experienced an injection of talent in 2019 when chef Adam Ryan took over the kitchen and got another renewal right before the pandemic hit when it was sold to the same group that owns Nourish Bistro in Banff and now also the aforementioned Dandelion in Ramsay. New co-owner Caleb Olney says that he never feels like his restaurant chefs’ hands are tied by having to stick to vegan or vegetarian food. If anything, they have more freedom than most chefs in meat-based restaurants that are tied to a particular concept or global cuisine.

“I did not want to do pasta primavera.” Stephen Deere, Modern Steak “With a vegan or vegetarian food you have such a wide variety of food to cook under one banner,” Olney says. “If you go into a steakhouse you know what to expect. You’re not going to find a Moroccan dish there, but we can do that. We like having the option to do so many kinds of regional and seasonally-based food.”

The real test for any vegetarian or vegan, however, is eating out at a non-vegetarian restaurant. Places like The Coup and Vegan Street are safe havens for non-meat eaters, but what is a vegetarian to do if their partner or parents insist on going to a steak house? In modern day Calgary, even eating at a meatcentric restaurant often means being able to choose a carefully constructed vegetarian or vegan dish that actually tastes good. “I learned from being a vegetarian for a short period of time that we needed to have a veggie or vegan section and also a lot of sides that can be combined to create a vegetarian meal,” says Modern Steak proprietor Stephen Deere, whose menu always includes two vegetarian entrees that change seasonally. “I did not want to do pasta primavera because that was the vegetarian item on everyone’s menu for much of the ’90s. If we’re going to do vegetarian dishes they can’t be throwaways and there has to be some thought behind them.” If you can get a good vegetarian meal at a restaurant called Modern Steak, the possibilities in Calgary really are endless. These days the meatavoidant not only have choice, but really good choices, setting vegetarians up not only for success, but also deliciousness.