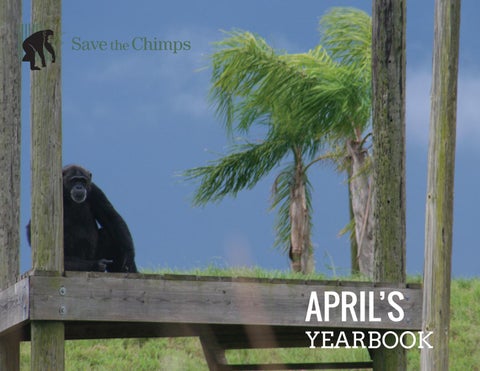 Baby Melody and April (under the mound of blankets).

2011 Update: April has been through quite an adventure this past year. After years of the quiet life with Ron and Melody, she has recently made several new friends. The first two were very rambunctious boys, Connor and Kramer, who love blankets just as much as she does. They assumed (incorrectly) that April was more than happy to share her blankets, so April found it necessary to teach them to find their own blankets and not to mess with her nest. April is a stern but kind teacher and they learned the rules quite quickly!

April met Grace and Sophie, who are just as confident and strongwilled as she is. But when April needs some “alone time,” she still has the quiet retreat of her favorite overhead tunnel. She will then gather a huge bundle of blankets-and occasionally little Melody--and relax high above everyone else. Other days she prefers to head out to the island and climb onto what is referred to as “April’s platform.” This is her favorite place on the island, where she can monitor the goings-on of the sanctuary.

2013 Update: April loves to be up high where she can have a good view and keep an eye on everything that’s going on around her. This is true both on the island, where she is often found hanging out on the biggest, tallest platform (known of course as “April’s Platform”) as well as indoors, where she loves to hang out in the overhead chutes that connect the rooms. We call these chutes the “tunnels”, and April is definitely one of our “tunnel dwellers,” chimps with a special love of nesting in the overhead tunnels. Whenever she is indoors she always asks her caregiver to let her up into a tunnel. How does she do this? Quite simply: she raises her hand and points it towards the tunnel entrance, looking back at her caregiver entreatingly. Of course, her caregivers are always happy to oblige!

April has recently developed a friendship with a fellow tunnel dweller, Nadia. The two of them will often sit up in a tunnel together, and in fact April is the only chimp with whom Nadia will share a tunnel. Otherwise Nadia wants her tunnel all to herself! It’s nice to see these two intelligent and strong-willed chimpanzees developing love and respect for each other.

April with Sebastian and Tammy.

2014 2014 Update: April has been a bit moody lately, but we think we have an idea why. The young chimps in her family—Marlon, Dylan, and her adopted daughter Melody—are in their terrible sixes. Humans have the terrible twos, but for chimps six years old is deﬁnitely when young chimps give the adults of the group a run for their money. Princess Melody has become a bit selﬁsh, stealing everything from food to blankets from her group mates, but April will discipline Melody if necessary. As Melody’s adopted mother, April may realize it’s her responsibility to at least try to set limits for her royal highness! When it comes to Marlon and Dylan, the sixyear-old boys, however, April has decided that disciplining them is not her job. Unfortunately, the naughty boys have picked up on that and they will tease April mercilessly. Although she gets upset, she doesn’t do anything to try to stop them. She has to count on Sir Connor or Sebastian, who (unfortunately for April) sometimes can’t be bothered. Hopefully these youngsters will grow out of this behavior soon!

2015 Update: April is a creature of habitâ&#x20AC;&#x201D;she has her routine and she likes to stick with it. She can still most often be found on her favorite platform, either basking in the sunshine, getting soaked in the rain, or perhaps curled up under a red blanket at sunset. Marlon and Dylan really like her platform too, and sometimes tease April when they are all up there. She gets upset, but sheâ&#x20AC;&#x2122;s too sweet of a chimp to ever lift a finger against them. (Plus, she probably wouldnâ&#x20AC;&#x2122;t be able to catch the little stinkers anyway!) One change that we have noticed is that April has largely turned the responsibilities of guiding Melody into adolescence over to Grace. April always keeps an eye on Melody, and will always be there for her, but April seems content to let Grace have the job of mentoring the young princess. Grace is the most dominant female in the group, so she may be the best person to both guide Melody and keep her in line!

2016 Update: Aprilâ&#x20AC;&#x2122;s adopted daughter Melody celebrated her 8th birthday this year. Although we still consider Melody to be a juvenile, she thinks she is all grown up and does not need her mommy anymore! Now that Mel has completely left the nest and has her own group of friends, April seems to be spending more time on her own. She continues to enjoy her favorite things, like nesting on her favorite platform, sitting in the rain, or drinking water out of the hose. She prefers to stay out of the way of the rowdy boys, like Kramer, Lil Connor, Marlon, and Dylan.

2017 Update: April is an excellent communicator. She’s not afraid to get her caregivers’ attention by raising her arms and pointing to ask for what she wants, especially juice – her favorite drink! April prefers fruits rather than vegetables at mealtimes and even sticks her tongue out as if to say, “Eww!” if it’s something she doesn’t want. Her caregivers lovingly oblige and offer her an alternate choice. Having been a former pet, April is very human-oriented. She is quite animated and enjoys showing off her clever side to her caregivers. April loves the companionship of her chimpanzee friends as well. Even though her adopted daughter Melody is growing up and becoming more independent, April still protects her. April is often seen on her favorite platform on the island with lots of blankets – rain or shine – usually accompanied by a few friends, grooming and napping.

2018 Update: April is a gracious combination of beauty and brains. This lovely lady likes to spend time brushing her hair to a glorious shine. Her caregivers often marvel at her youthful appearance, most likely the result of good genes and a dedicated beauty regimen. April still enjoys her alone time on her special platform, traditionally known as “April’s platform.” Perhaps these moments of quiet reflection to recharge her batteries also contributes to her aging gracefully. Although April forms close bonds with her caregivers, she also understands their primary purpose is to keep her happy and she keeps them on their toes with her demands. Perhaps as a holdover from her past as a pet, she prefers to drink bottles of water rather than use the communal lixits. She frequently brings empty bottles to her caregivers to be filled with water. Another thing she prefers not to share is her feeder box during meal times. Most chimps come to the feeder box, take their food, and allow the next chimp to get in line. April prefers to have her own feeder box and will only share with Sebastian, a high-ranking male in her family. They seem to have developed a special understanding based on many years of living together. April has begun to mellow slightly as she has started to approach middle age. In her younger days, she was usually the one stirring up trouble. Nowadays, she seems to sit back and let the up and coming hooligans in the group take on this role. One thing for sure, whether it’s relaxing by herself, or spending time with carefully chosen friends, she is living life on her terms and no one does this better than April.

2019 Update: Beautiful April becomes more and more set in her ways as she gets older. Things like meal times are all business for April; she prefers to get the meal done quickly, ask her caregivers for a bit of juice with puppy dog eyes and an outstretched hand, and head straight out to her platform on the island as soon as the meal is done. Even though baby Melody is no longer a baby, April still adores her and rushes to her defense if any other chimps become cranky with her. Though Melody may be more aloof now that sheâ&#x20AC;&#x2122;s a big kid, she certainly appreciates the motherly support when sheâ&#x20AC;&#x2122;s stepped into trouble! April sitting atop her platform has become an iconic sight to all of us at Save the Chimps. Almost always wrapped up warmly in a red blanket, she enjoys the platform rain or shine every single day. The other chimps in her family rotate spending time with April on the platform, and usually you can spot two to five chimps up there with her.

Want more April? Symbolically adopt her for only $25 a month and we will send you her 2020 update, your own adoption certificate and more! By symbolically adopting a chimp, your donation provides care for your adopted chimp including three fresh and nutritious meals of fruits and vegetables daily, loving care from the staff, maintenance of their beautiful island homes, and enrichment activities to fulfill their lives. Visit savethechimps.org/adopt to adopt April today!

From Service to Sanctuary Primatologist and captive chimpanzee pioneer, Dr. Carol Noon co-founded Save the Chimps in 1997, suing the Air Force for custody of chimpanzees used in the space program, settling out of court for custody of 21 chimps. In 2001, the Air Force chimpanzees arrived at the 150 acre Sanctuary located in Fort Pierce, Florida, built in partnership with the Arcus Foundation-- enjoying fresh air, green grass and their own private island.

From Captivity to Freedom In 2002, The Coulston Foundation, a biomedical research lab housing 266 chimpanzees with a history of violating the Animal Welfare Act, went bankrupt. In partnership with the Arcus Foundation, and other donors, Save the Chimps purchased the New Mexico lab. The rescue of these chimpanzees represented the largest rescue of captive chimpanzees in history. Eventually it became the â&#x20AC;&#x153;Great Chimpanzee Migration,â&#x20AC;? a nine-year effort to relocate the chimpanzees from the lab to their new island homes in Florida. In 2011, the Great Chimpanzee Migration ended and the final group of former lab chimpanzees were released. Since its founding, Save the Chimps has provided sanctuary to over 330 chimpanzees in need.

We take in the orphaned, abandoned, isolated and the neglected.

We give them an island home, a vibrant family, and tons of attention and care.

We surround them with love and care and joy and play.

Then, we let time be time and chimps be chimps.

“Every time I’ve opened a door, they’ve gladly walked through it. They are so ready to get on with their lives.” -- Dr. Noon

We are proud to share in the big steps and small leaps of progress each of them make in their individual journeys to recovery and renewal. 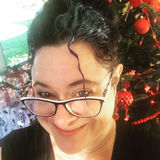 Save the Chimps: April's Yearbook

Save the Chimps is the world's largest privately funded sanctuary for retired and rescued chimpanzees. This yearbook chronicles April's life...

Save the Chimps: April's Yearbook

Save the Chimps is the world's largest privately funded sanctuary for retired and rescued chimpanzees. This yearbook chronicles April's life...