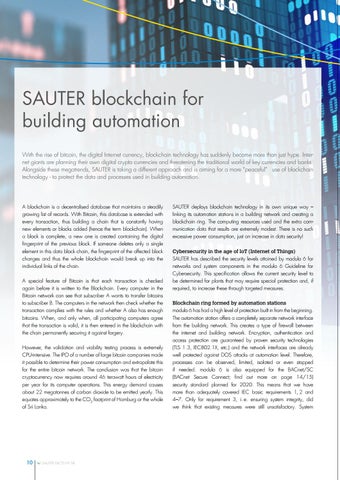 SAUTER blockchain for building automation With the rise of bitcoin, the digital Internet currency, blockchain technology has suddenly become more than just hype. Internet giants are planning their own digital crypto currencies and threatening the traditional world of key currencies and banks. Alongside these megatrends, SAUTER is taking a different approach and is aiming for a more “peaceful” use of blockchain technology - to protect the data and processes used in building automation.

A blockchain is a decentralised database that maintains a steadily growing list of records. With Bitcoin, this database is extended with every transaction, thus building a chain that is constantly having new elements or blocks added (hence the term blockchain). When a block is complete, a new one is created containing the digital fingerprint of the previous block. If someone deletes only a single element in this data block chain, the fingerprint of the affected block changes and thus the whole blockchain would break up into the individual links of the chain. A special feature of Bitcoin is that each transaction is checked again before it is written to the Blockchain. Every computer in the Bitcoin network can see that subscriber A wants to transfer bitcoins to subscriber B. The computers in the network then check whether the transaction complies with the rules and whether A also has enough bitcoins. When, and only when, all participating computers agree that the transaction is valid, it is then entered in the blockchain with the chain permanently securing it against forgery. However, the validation and viability testing process is extremely CPU-intensive. The IPO of a number of large bitcoin companies made it possible to determine their power consumption and extrapolate this for the entire bitcoin network. The conclusion was that the bitcoin cryptocurrency now requires around 46 terawatt hours of electricity per year for its computer operations. This energy demand causes about 22 megatonnes of carbon dioxide to be emitted yearly. This equates approximately to the CO2 footprint of Hamburg or the whole of Sri Lanka.

SAUTER deploys blockchain technology in its own unique way – linking its automation stations in a building network and creating a blockchain ring. The computing resources used and the extra communication data that results are extremely modest. There is no such excessive power consumption, just an increase in data security! Cybersecurity in the age of IoT (Internet of Things) SAUTER has described the security levels attained by modulo 6 for networks and system components in the modulo 6 Guideline for Cybersecurity. This specification allows the current security level to be determined for plants that may require special protection and, if required, to increase these through targeted measures. Blockchain ring formed by automation stations modulo 6 has had a high level of protection built in from the beginning. The automation station offers a completely separate network interface from the building network. This creates a type of firewall between the internet and building network. Encryption, authentication and access protection are guaranteed by proven security technologies (TLS 1.3, IEC802.1X, etc.) and the network interfaces are already well protected against DOS attacks at automation level. Therefore, processes can be observed, limited, isolated or even stopped if needed. modulo 6 is also equipped for the BACnet/SC (BACnet Secure Connect; find out more on page 14/15) security standard planned for 2020. This means that we have more than adequately covered IEC basic requirements 1, 2 and 4–7. Only for requirement 3, i. e. ensuring system integrity, did we think that existing measures were still unsatisfactory. System 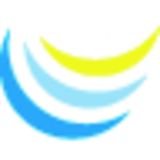 The magazine for SAUTER customers

The magazine for SAUTER customers