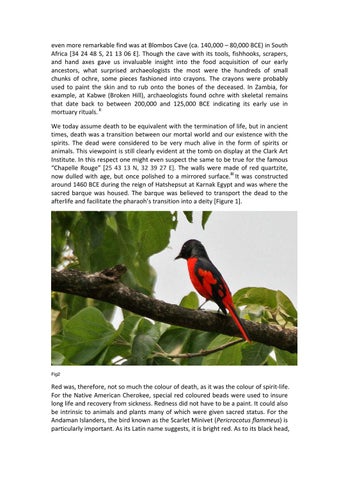 even more remarkable find was at Blombos Cave (ca. 140,000 – 80,000 BCE) in South Africa [34 24 48 S, 21 13 06 E]. Though the cave with its tools, fishhooks, scrapers, and hand axes gave us invaluable insight into the food acquisition of our early ancestors, what surprised archaeologists the most were the hundreds of small chunks of ochre, some pieces fashioned into crayons. The crayons were probably used to paint the skin and to rub onto the bones of the deceased. In Zambia, for example, at Kabwe (Broken Hill), archaeologists found ochre with skeletal remains that date back to between 200,000 and 125,000 BCE indicating its early use in mortuary rituals. ii We today assume death to be equivalent with the termination of life, but in ancient times, death was a transition between our mortal world and our existence with the spirits. The dead were considered to be very much alive in the form of spirits or animals. This viewpoint is still clearly evident at the tomb on display at the Clark Art Institute. In this respect one might even suspect the same to be true for the famous “Chapelle Rouge” [25 43 13 N, 32 39 27 E]. The walls were made of red quartzite, now dulled with age, but once polished to a mirrored surface.iii It was constructed around 1460 BCE during the reign of Hatshepsut at Karnak Egypt and was where the sacred barque was housed. The barque was believed to transport the dead to the afterlife and facilitate the pharaoh’s transition into a deity [Figure 1].

Red was, therefore, not so much the colour of death, as it was the colour of spirit‐life. For the Native American Cherokee, special red coloured beads were used to insure long life and recovery from sickness. Redness did not have to be a paint. It could also be intrinsic to animals and plants many of which were given sacred status. For the Andaman Islanders, the bird known as the Scarlet Minivet (Pericrocotus flammeus) is particularly important. As its Latin name suggests, it is bright red. As to its black head,

Professor Mark Jarzombek writes for Saturated Space about the vital and potent role earth colours played in the very tangible relationships that First Society peoples cultivated between the spirit world, the afterlife, and the everyday.