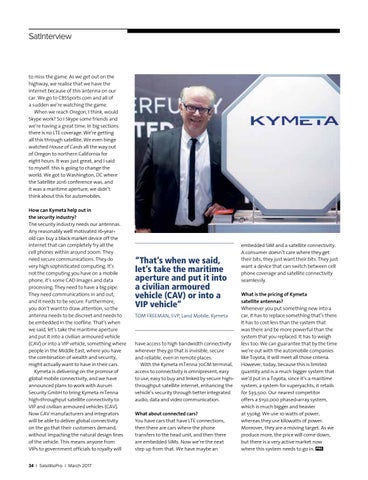 to miss the game. As we get out on the highway, we realise that we have the internet because of this antenna on our car. We go to CBSSports.com and all of a sudden we’re watching the game. When we reach Oregon, I think, would Skype work? So I Skype some friends and we’re having a great time. In big sections there is no LTE coverage. We’re getting all this through satellite. We even binge watched House of Cards all the way out of Oregon to northern California for eight hours. It was just great, and I said to myself: this is going to change the world. We got to Washington, DC where the Satellite 2016 conference was, and it was a maritime aperture; we didn’t think about this for automobiles. How can Kymeta help out in the security industry? The security industry needs our antennas. Any reasonably well motivated 16-yearold can buy a black market device off the internet that can completely fry all the cell phones within around 200m. They need secure communications. They do very high sophisticated computing. It’s not the computing you have on a mobile phone, it’s some CAD images and data processing. They need to have a big pipe. They need communications in and out, and it needs to be secure. Furthermore, you don’t want to draw attention, so the antenna needs to be discreet and needs to be embedded in the roofline. That’s when we said, let’s take the maritime aperture and put it into a civilian armoured vehicle (CAV) or into a VIP vehicle, something where people in the Middle East, where you have the combination of wealth and security, might actually want to have in their cars. Kymeta is delivering on the promise of global mobile connectivity, and we have announced plans to work with Aurum Security GmbH to bring Kymeta mTenna high-throughput satellite connectivity to VIP and civilian armoured vehicles (CAV). Now CAV manufacturers and integrators will be able to deliver global connectivity on the go that their customers demand, without impacting the natural design lines of the vehicle. This means anyone from VIPs to government officials to royalty will 34 | SatellitePro | March 2017

“That’s when we said, let’s take the maritime aperture and put it into a civilian armoured vehicle (CAV) or into a VIP vehicle” TOM FrEEMAN, SVP, Land Mobile, Kymeta

have access to high bandwidth connectivity wherever they go that is invisible, secure and reliable, even in remote places. With the Kymeta mTenna 70CM terminal, access to connectivity is omnipresent, easy to use, easy to buy and linked by secure highthroughput satellite internet, enhancing the vehicle’s security through better integrated audio, data and video communication. What about connected cars? You have cars that have LTE connections, then there are cars where the phone transfers to the head unit, and then there are embedded SIMs. Now we’re the next step up from that. We have maybe an

embedded SIM and a satellite connectivity. A consumer doesn’t care where they get their bits, they just want their bits. They just want a device that can switch between cell phone coverage and satellite connectivity seamlessly. What is the pricing of Kymeta satellite antennas? Whenever you put something new into a car, it has to replace something that’s there. It has to cost less than the system that was there and be more powerful than the system that you replaced. It has to weigh less too. We can guarantee that by the time we’re out with the automobile companies like Toyota, it will meet all those criteria. However, today, because this is limited quantity and is a much bigger system that we’d put in a Toyota, since it’s a maritime system, a system for superyachts, it retails for $39,500. Our nearest competitor offers a $150,000 phased-array system, which is much bigger and heavier at 550kg. We use 10 watts of power, whereas they use kilowatts of power. Moreover, they are a moving target. As we produce more, the price will come down, but there is a very active market now where this system needs to go in. PRO 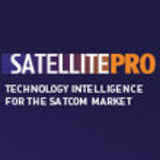 Satellite Pro Middle East, a monthly publication from CPI Media Group, is the only regional.

Satellite Pro Middle East, a monthly publication from CPI Media Group, is the only regional.