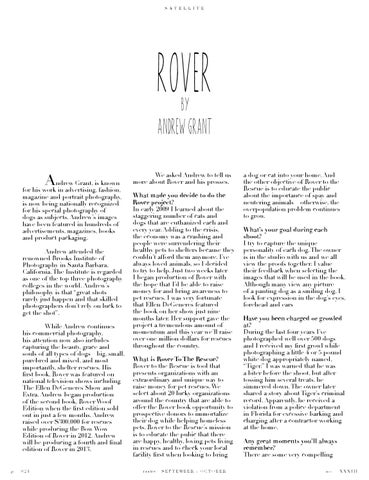 A ndrew Grant, is known for his work in advertising, fashion,

magazine and portrait photography, is now being nationally recognized for his special photography of dogs as subjects. Andrew’s images have been featured in hundreds of advertisements, magazines, books and product packaging. Andrew attended the renowned Brooks Institute of Photography in Santa Barbara, California. The Institute is regarded as one of the top three photography colleges in the world. Andrew’s philosophy is that “great shots rarely just happen and that skilled photographers don’t rely on luck to get the shot”. While Andrew continues his commercial photography, his attention now also includes capturing the beauty, grace and souls of all types of dogs—big, small, purebred and mixed, and most importantly, shelter rescues. His first book, Rover was featured on national television shows including The Ellen DeGeneres Show and Extra. Andrew began production of the second book, Rover Woof Edition when the first edition sold out in just a few months. Andrew raised over $300,000 for rescues while producing the Bow Wow Edition of Rover in 2012. Andrew will be producing a fourth and final edition of Rover in 2013.

We asked Andrew to tell us more about Rover and his prosses. What made you decide to do the Rover project? In early 2009 I learned about the staggering number of cats and dogs that are euthanized each and every year. Adding to the crisis, the economy was a crashing and people were surrendering their healthy pets to shelters because they couldn’t afford them anymore. I’ve always loved animals, so I decided to try to help. Just two weeks later I began production of Rover with the hope that I’d be able to raise money for and bring awareness to pet rescues. I was very fortunate that Ellen DeGeneres featured the book on her show just nine months later. Her support gave the project a tremendous amount of momentum and this year we’ll raise over one million dollars for rescues throughout the country. What is Rover To The Rescue? Rover to the Rescue is tool that presents organizations with an extraordinary and unique way to raise money for pet rescues. We select about 20 lucky organizations around the country that are able to offer the Rover book opportunity to prospective donors to immortalize their dog while helping homeless pets. Rover to the Rescue’s mission is to educate the pubic that there are happy, healthy, loving pets living in rescues and to check your local facility first when looking to bring issue

a dog or cat into your home. And the other objective of Rover to the Rescue is to educate the public about the importance of spay and neutering animals – otherwise, the overpopulation problem continues to grow. What’s your goal during each shoot? I try to capture the unique personality of each dog. The owner is in the studio with us and we all view the proofs together. I value their feedback when selecting the images that will be used in the book. Although many view any picture of a panting dog as a smiling dog, I look for expression in the dog’s eyes, forehead and ears Have you been charged or growled at? During the last four years I’ve photographed well over 500 dogs and I received my first growl while photographing a little 4 or 5 pound white dog appropriately named, “Tiger.” I was warned that he was a biter before the shoot, but after tossing him several treats, he simmered down. The owner later shared a story about Tiger’s criminal record. Apparently, he received a violation from a police department in Florida for excessive barking and charging after a contractor working at the home. Any great moments you’ll always remember? There are some very compelling no.