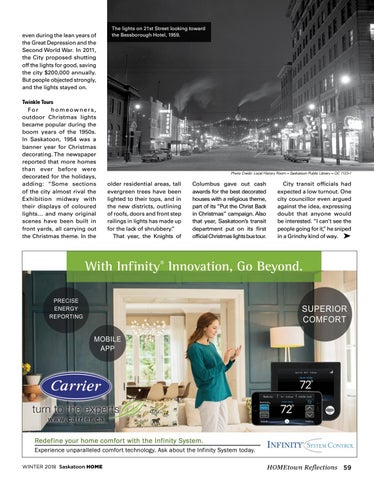 even during the lean years of the Great Depression and the Second World War. In 2011, the City proposed shutting off the lights for good, saving the city $200,000 annually. But people objected strongly, and the lights stayed on. Twinkle Tours For homeowners, outdoor Christmas lights became popular during the boom years of the 1950s. In Saskatoon, 1954 was a banner year for Christmas decorating. The newspaper reported that more homes than ever before were decorated for the holidays, adding: “Some sections of the city almost rival the Exhibition midway with their displays of coloured lights… and many original scenes have been built in front yards, all carrying out the Christmas theme. In the

The lights on 21st Street looking toward the Bessborough Hotel, 1959.

older residential areas, tall evergreen trees have been lighted to their tops, and in the new districts, outlining of roofs, doors and front step railings in lights has made up for the lack of shrubbery.” That year, the Knights of

Columbus gave out cash awards for the best decorated houses with a religious theme, part of its “Put the Christ Back in Christmas” campaign. Also that year, Saskatoon’s transit department put on its first official Christmas lights bus tour.

City transit officials had expected a low turnout. One city councillor even argued against the idea, expressing doubt that anyone would be interested. “I can’t see the people going for it,” he sniped in a Grinchy kind of way.