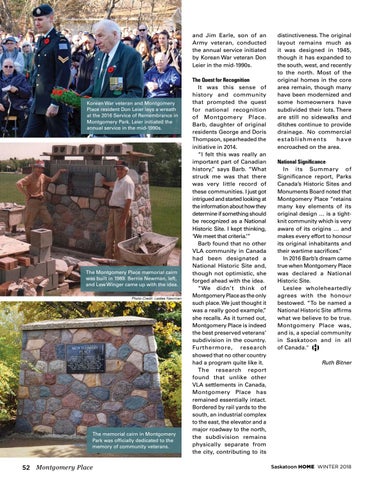 and Jim Earle, son of an Army veteran, conducted the annual service initiated by Korean War veteran Don Leier in the mid-1990s.

Korean War veteran and Montgomery Place resident Don Leier lays a wreath at the 2016 Service of Remembrance in Montgomery Park. Leier initiated the annual service in the mid-1990s.

The Montgomery Place memorial cairn was built in 1989. Bernie Newman, left, and Lew Winger came up with the idea. Photo Credit: Leslee Newman

The memorial cairn in Montgomery Park was officially dedicated to the memory of community veterans.

The Quest for Recognition It was this sense of history and community that prompted the quest for national recognition of Montgomery Place. Barb, daughter of original residents George and Doris Thompson, spearheaded the initiative in 2014. “I felt this was really an important part of Canadian history,” says Barb. “What struck me was that there was very little record of these communities. I just got intrigued and started looking at the information about how they determine if something should be recognized as a National Historic Site. I kept thinking, ‘We meet that criteria.’” Barb found that no other VLA community in Canada had been designated a National Historic Site and, though not optimistic, she forged ahead with the idea. “We didn’t think of Montgomery Place as the only such place. We just thought it was a really good example,” she recalls. As it turned out, Montgomery Place is indeed the best preserved veterans’ subdivision in the country. Furthermore, research showed that no other country had a program quite like it. The research report found that unlike other VLA settlements in Canada, Montgomery Place has remained essentially intact. Bordered by rail yards to the south, an industrial complex to the east, the elevator and a major roadway to the north, the subdivision remains physically separate from the city, contributing to its

distinctiveness. The original layout remains much as it was designed in 1945, though it has expanded to the south, west, and recently to the north. Most of the original homes in the core area remain, though many have been modernized and some homeowners have subdivided their lots. There are still no sidewalks and ditches continue to provide drainage. No commercial establishments have encroached on the area. National Significance In its Summary of Significance report, Parks Canada’s Historic Sites and Monuments Board noted that Montgomery Place “retains many key elements of its original design … is a tightknit community which is very aware of its origins … and makes every effort to honour its original inhabitants and their wartime sacrifices.” In 2016 Barb’s dream came true when Montgomery Place was declared a National Historic Site. Leslee wholeheartedly agrees with the honour bestowed. “To be named a National Historic Site affirms what we believe to be true. Montgomery Place was, and is, a special community in Saskatoon and in all of Canada." Ruth Bitner