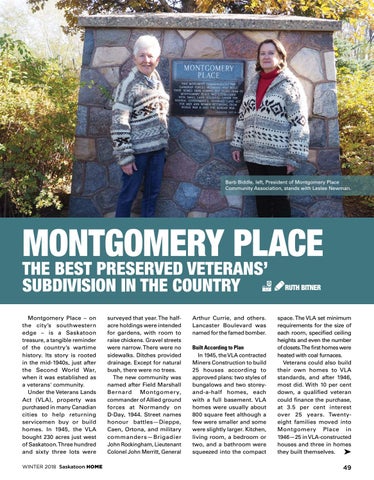 MONTGOMERY PLACE THE BEST PRESERVED VETERANS’ SUBDIVISION IN THE COUNTRY Montgomery Place – on the city’s southwestern edge – is a Saskatoon treasure, a tangible reminder of the country’s wartime history. Its story is rooted in the mid-1940s, just after the Second World War, when it was established as a veterans' community. Under the Veterans Lands Act (VLA), property was purchased in many Canadian cities to help returning servicemen buy or build homes. In 1945, the VLA bought 230 acres just west of Saskatoon. Three hundred and sixty three lots were WINTER 2018 Saskatoon HOME

surveyed that year. The halfacre holdings were intended for gardens, with room to raise chickens. Gravel streets were narrow. There were no sidewalks. Ditches provided drainage. Except for natural bush, there were no trees. The new community was named after Field Marshall Bernard Montgomery, commander of Allied ground forces at Normandy on D-Day, 1944. Street names honour battles—Dieppe, Caen, Ortona, and military commanders—Brigadier John Rockingham, Lieutenant Colonel John Merritt, General

Arthur Currie, and others. Lancaster Boulevard was named for the famed bomber. Built According to Plan In 1945, the VLA contracted Miners Construction to build 25 houses according to approved plans: two styles of bungalows and two storeyand-a-half homes, each with a full basement. VLA homes were usually about 800 square feet although a few were smaller and some were slightly larger. Kitchen, living room, a bedroom or two, and a bathroom were squeezed into the compact

space. The VLA set minimum requirements for the size of each room, specified ceiling heights and even the number of closets.The first homes were heated with coal furnaces. Veterans could also build their own homes to VLA standards, and after 1946, most did. With 10 per cent down, a qualified veteran could finance the purchase, at 3.5 per cent interest over 25 years. Twentyeight families moved into Montgomery Place in 1946—25 in VLA-constructed houses and three in homes they built themselves.