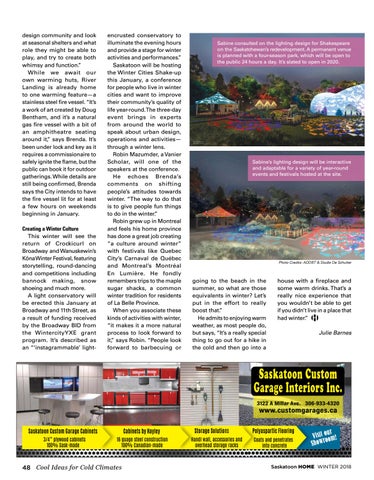 design community and look at seasonal shelters and what role they might be able to play, and try to create both whimsy and function.” While we await our own warming huts, River Landing is already home to one warming feature—a stainless steel fire vessel. “It’s a work of art created by Doug Bentham, and it’s a natural gas fire vessel with a bit of an amphitheatre seating around it,” says Brenda. It’s been under lock and key as it requires a commissionaire to safely ignite the flame, but the public can book it for outdoor gatherings. While details are still being confirmed, Brenda says the City intends to have the fire vessel lit for at least a few hours on weekends beginning in January. Creating a Winter Culture This winter will see the return of Crockicurl on Broadway and Wanuskewin’s Kôna Winter Festival, featuring storytelling, round-dancing and competitions including bannock making, snow shoeing and much more. A light conservatory will be erected this January at Broadway and 11th Street, as a result of funding received by the Broadway BID from the WintercityYXE grant program. It’s described as an “‘instagrammable’ light-

encrusted conservatory to illuminate the evening hours and provide a stage for winter activities and performances.” Saskatoon will be hosting the Winter Cities Shake-up this January, a conference for people who live in winter cities and want to improve their community’s quality of life year-round. The three-day event brings in experts from around the world to speak about urban design, operations and activities— through a winter lens. Robin Mazumder, a Vanier Scholar, will one of the speakers at the conference. He echoes Brenda’s comments on shifting people’s attitudes towards winter. “The way to do that is to give people fun things to do in the winter.” Robin grew up in Montreal and feels his home province has done a great job creating “a culture around winter” with festivals like Quebec City’s Carnaval de Québec and Montreal’s Montréal En Lumière. He fondly remembers trips to the maple sugar shacks, a common winter tradition for residents of La Belle Province. When you associate these kinds of activities with winter, “it makes it a more natural process to look forward to it,” says Robin. “People look forward to barbecuing or

Sabine consulted on the lighting design for Shakespeare on the Saskatchewan’s redevelopment. A permanent venue is planned with a four-season park, which will be open to the public 24 hours a day. It’s slated to open in 2020.

Sabine’s lighting design will be interactive and adaptable for a variety of year-round events and festivals hosted at the site.

going to the beach in the summer, so what are those equivalents in winter? Let’s put in the effort to really boost that.” He admits to enjoying warm weather, as most people do, but says, “It’s a really special thing to go out for a hike in the cold and then go into a

house with a fireplace and some warm drinks. That’s a really nice experience that you wouldn’t be able to get if you didn’t live in a place that had winter.” Julie Barnes