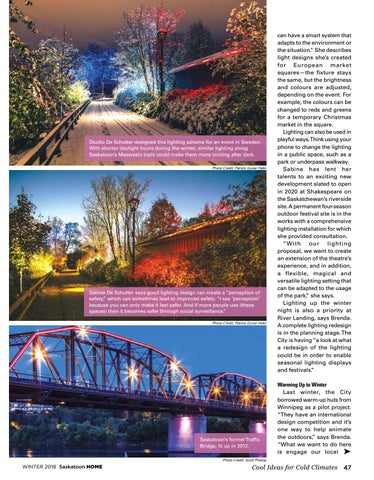 Sabine De Schutter says good lighting design can create a “perception of safety,” which can sometimes lead to improved safety. “I say ‘perception’ because you can only make it feel safer. And if more people use (these spaces) then it becomes safer through social surveillance.” Photo Credit: Patrick Gunar Helin

can have a smart system that adapts to the environment or the situation.” She describes light designs she’s created for European market squares—the fixture stays the same, but the brightness and colours are adjusted, depending on the event. For example, the colours can be changed to reds and greens for a temporary Christmas market in the square. Lighting can also be used in playful ways.Think using your phone to change the lighting in a public space, such as a park or underpass walkway. Sabine has lent her talents to an exciting new development slated to open in 2020 at Shakespeare on the Saskatchewan’s riverside site. A permanent four-season outdoor festival site is in the works with a comprehensive lighting installation for which she provided consultation. “With our lighting proposal, we want to create an extension of the theatre’s experience, and in addition, a flexible, magical and versatile lighting setting that can be adapted to the usage of the park,” she says. Lighting up the winter night is also a priority at River Landing, says Brenda. A complete lighting redesign is in the planning stage. The City is having “a look at what a redesign of the lighting could be in order to enable seasonal lighting displays and festivals.” Warming Up to Winter Last winter, the City borrowed warm-up huts from Winnipeg as a pilot project. “They have an international design competition and it’s one way to help animate the outdoors,” says Brenda. “What we want to do here is engage our local