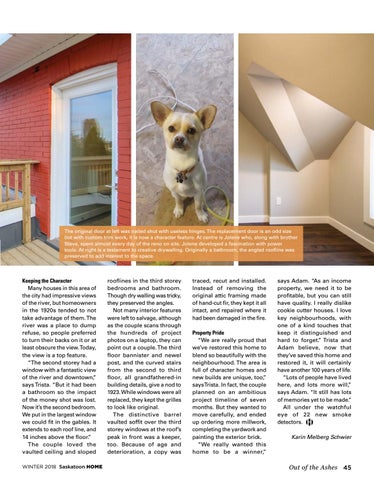 The original door at left was nailed shut with useless hinges. The replacement door is an odd size but with custom trim work, it is now a character feature. At centre is Jolene who, along with brother Steve, spent almost every day of the reno on site. Jolene developed a fascination with power tools. At right is a testament to creative drywalling. Originally a bathroom, the angled roofline was preserved to add interest to the space.

Keeping the Character Many houses in this area of the city had impressive views of the river, but homeowners in the 1920s tended to not take advantage of them. The river was a place to dump refuse, so people preferred to turn their backs on it or at least obscure the view. Today, the view is a top feature. “The second storey had a window with a fantastic view of the river and downtown,” says Trista. “But it had been a bathroom so the impact of the money shot was lost. Now it’s the second bedroom. We put in the largest window we could fit in the gables. It extends to each roof line, and 14 inches above the floor.” The couple loved the vaulted ceiling and sloped WINTER 2018 Saskatoon HOME

rooflines in the third storey bedrooms and bathroom. Though dry walling was tricky, they preserved the angles. Not many interior features were left to salvage, although as the couple scans through the hundreds of project photos on a laptop, they can point out a couple. The third floor bannister and newel post, and the curved stairs from the second to third floor, all grandfathered-in building details, give a nod to 1923. While windows were all replaced, they kept the grilles to look like original. The distinctive barrel vaulted soffit over the third storey windows at the roof’s peak in front was a keeper, too. Because of age and deterioration, a copy was

traced, recut and installed. Instead of removing the original attic framing made of hand-cut fir, they kept it all intact, and repaired where it had been damaged in the fire. Property Pride “We are really proud that we’ve restored this home to blend so beautifully with the neighbourhood. The area is full of character homes and new builds are unique, too,” says Trista. In fact, the couple planned on an ambitious project timeline of seven months. But they wanted to move carefully, and ended up ordering more millwork, completing the yardwork and painting the exterior brick. “We really wanted this home to be a winner,”

says Adam. “As an income property, we need it to be profitable, but you can still have quality. I really dislike cookie cutter houses. I love key neighbourhoods, with one of a kind touches that keep it distinguished and hard to forget.” Trista and Adam believe, now that they’ve saved this home and restored it, it will certainly have another 100 years of life. “Lots of people have lived here, and lots more will,” says Adam. “It still has lots of memories yet to be made.” All under the watchful eye of 22 new smoke detectors. Karin Melberg Schwier