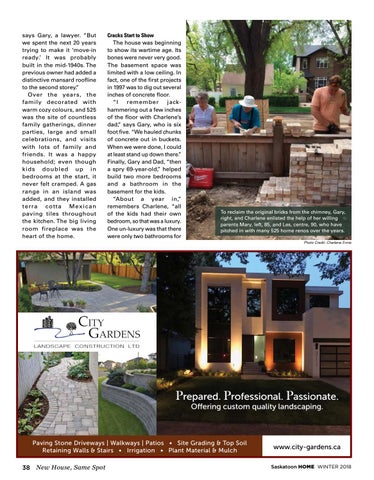 says Gary, a lawyer. “But we spent the next 20 years trying to make it ‘move-in ready.’ It was probably built in the mid-1940s. The previous owner had added a distinctive mansard roofline to the second storey.” Over the years, the family decorated with warm cozy colours, and 525 was the site of countless family gatherings, dinner parties, large and small celebrations, and visits with lots of family and friends. It was a happy household; even though kids doubled up in bedrooms at the start, it never felt cramped. A gas range in an island was added, and they installed t e rr a c o tt a M e x i c a n paving tiles throughout the kitchen. The big living room fireplace was the heart of the home.

Cracks Start to Show The house was beginning to show its wartime age. Its bones were never very good. The basement space was limited with a low ceiling. In fact, one of the first projects in 1997 was to dig out several inches of concrete floor. “I remember jackhammering out a few inches of the floor with Charlene’s dad,” says Gary, who is six foot five. “We hauled chunks of concrete out in buckets. When we were done, I could at least stand up down there.” Finally, Gary and Dad, “then a spry 69-year-old,” helped build two more bedrooms and a bathroom in the basement for the kids. “About a year in,” remembers Charlene, “all of the kids had their own bedroom, so that was a luxury. One un-luxury was that there were only two bathrooms for

To reclaim the original bricks from the chimney, Gary, right, and Charlene enlisted the help of her willing parents Mary, left, 85, and Les, centre, 90, who have pitched in with many 525 home renos over the years. Photo Credit: Charlene Ennis