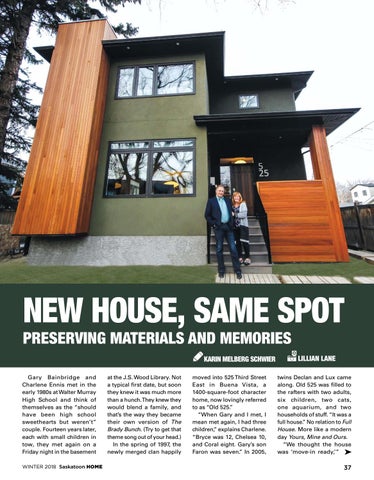 NEW HOUSE, SAME SPOT PRESERVING MATERIALS AND MEMORIES KARIN MELBERG SCHWIER Gary Bainbridge and Charlene Ennis met in the early 1980s at Walter Murray High School and think of themselves as the “should have been high school sweethearts but weren’t” couple. Fourteen years later, each with small children in tow, they met again on a Friday night in the basement WINTER 2018 Saskatoon HOME

at the J.S. Wood Library. Not a typical first date, but soon they knew it was much more than a hunch. They knew they would blend a family, and that’s the way they became their own version of The Brady Bunch. (Try to get that theme song out of your head.) In the spring of 1997, the newly merged clan happily

LILLIAN LANE twins Declan and Lux came along. Old 525 was filled to the rafters with two adults, six children, two cats, one aquarium, and two households of stuff. “It was a full house.” No relation to Full House. More like a modern day Yours, Mine and Ours. “We thought the house was ‘move-in ready,’”