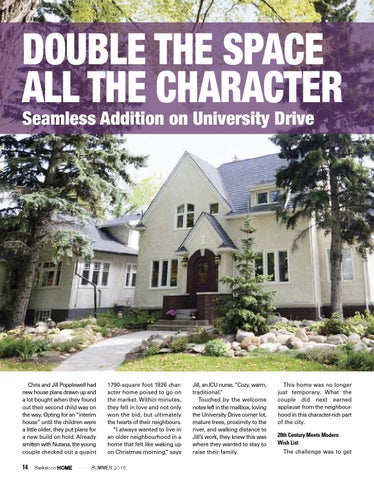 DOUBLE THE SPACE ALL THE CHARACTER Seamless Addition on University Drive

Chris and Jill Popplewell had new house plans drawn up and a lot bought when they found out their second child was on the way. Opting for an “interim house” until the children were a little older, they put plans for a new build on hold. Already smitten with Nutana, the young couple checked out a quaint

1790-square foot 1926 character home poised to go on the market. Within minutes, they fell in love and not only won the bid, but ultimately the hearts of their neighbours. “I always wanted to live in an older neighbourhood in a home that felt like waking up on Christmas morning,” says

Jill, an ICU nurse. “Cozy, warm, traditional.” Touched by the welcome notes left in the mailbox, loving the University Drive corner lot, mature trees, proximity to the river, and walking distance to Jill’s work, they knew this was where they wanted to stay to raise their family.

This home was no longer just temporary. What the couple did next earned applause from the neighbourhood in this character-rich part of the city. 20th Century Meets Modern Wish List The challenge was to get