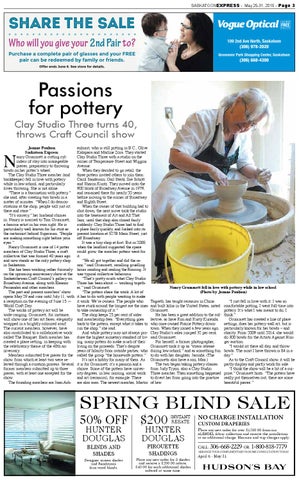 Purchase a complete pair of glasses and your FREE pair can be redeemed by family or friends.

Clay Studio Three turns 40, throws Craft Council show Joanne Paulson Saskatoon Express ancy Grummett is cutting cylinders of clay into manageable pieces, preparatory to throwing bowls on her potter’s wheel. The Clay Studio Three member (and bookkeeper) fell in love with pottery while in law school, and particularly loves throwing. She is not alone. “There is a fascination with pottery,” she said, after creating two bowls in a matter of minutes. “When I do demonstrations at the shop, people will just sit there and stare.” “It’s sorcery,” her husband chimes in. Nancy is married to Tom Grummett, a famous artist in his own right. He is particularly well known for his stint as the cartoonist behind Superman. “People are making something right before your eyes.” Nancy Grummett is one of 14 potter members of Clay Studio Three, a craft collective that was formed 40 years ago and now stands as the only pottery shop in Saskatoon. She has been working rather furiously on the upcoming anniversary show at the Saskatchewan Craft Council’s gallery on Broadway Avenue, along with Eleanor Fernandez and other members. The past and present members’ show opens May 29 and runs until July 11, with a reception on the evening of June 15 — World Craft Day. The works of pottery art will be wide-ranging; Grummett, for instance, will show one of her art faces, elegantly wrapped in a brightly coloured scarf. The current members, however, have also contributed to a collaborative work called The Banquet. Each member has created a place setting, in keeping with the celebratory theme of the 40th anniversary. Members submitted five pieces for the show, from which at least two were selected through a curation process. Several former members submitted up to three pieces, with at least one accepted for the show. The founding members are Joan Ash-

enhurst, who is still potting in B.C., Olive Kalapaca and Marline Zora. They started Clay Studio Three with a studio on the corner of Temperance Street and Wiggins Avenue. When they decided to go retail, the three potters invited others to join them: Carol Sanderson, Gail Steck, Ilse Schott and Sharon Kuntz. They moved onto the 900 block of Broadway Avenue in 1979, and remained there for nearly 20 years before moving to the corner of Broadway and Eighth Street. When the owner of that building had to shut down, the next move took the studio into the basement of Art and All That Jazz, until that shop also closed fairly suddenly. Clay Studio Three had to find a place fairly quickly, and lucked into its present location at 527B Main Street, just off Broadway. It was a tiny shop at first. But in 2009, when the landlord suggested the space could grow, the member potters went for it. “We all got together and did the renos,” said Grummett, recalling gruelling hours sanding and sealing the flooring. It was typical collective behaviour. “That’s pretty much what Clay Studio Three has been about — working together,” said Grummett. “The potters share the work. A lot of it has to do with people wanting to make it work. We’re owners. The people who have stuck around the longest are the ones to take ownership of it.” The shop keeps 25 per cent of sales and membership fees. “Everything goes back to the potters, except what it takes to run the shop,” she said. And while pottery may not always produce the highest monetary standard of living, many potters do make much of their living on the proceeds. That’s despite years of hilarity from outside parties, who called the group “the housewife potters.” It’s not a hobby for many of them. As it is for Grummett, it’s a passion and a choice. Some of the potters have university degrees, in law, nursing, social work and art (ceramics), for example. There are also men. The newest member, Martin

Nancy Grummett fell in love with pottery while in law school (Photo by Joanne Paulson) Tagseth, has taught ceramics in China and built kilns in the United States, noted Grummett. He has been a great addition to the collective, as have Ron and Rusty Kurenda, who once owned Prairie Pottery downtown. When they joined a few years ago, Clay Studio’s sales jumped 32 per cent, said Grummett. For herself, a former photographer, Grummett took it up as “stress release during law school,” and as something fun to do with her daughter, Jacinda. (The Grummetts also have a son, Max.) The two began taking pottery classes from Judy Tryon, also a Clay Studio Three member. Then something happened to divert her from going into the practice of law.

“I just fell in love with it. I was so comfortable potting, I went full-time into pottery. It’s what I was meant to do, I think.” Grummett has created a line of place settings, does her pottery wall art, but is particularly known for her bowls – and charity. From 2009 until 2014, she would do 300 bowls for the Artists Against Hunger auction. “I would sit there all day, and throw bowls. The most I have thrown is 84 in a day.” As to the Craft Council show, it will be partly display and partly work for sale. “I think the show will be a bit of a surprise,” Grummett hints. “The potters have really put themselves out; there are some beautiful pieces.”

PIROUETTE shAdes place any new order and receive the SHADINGS