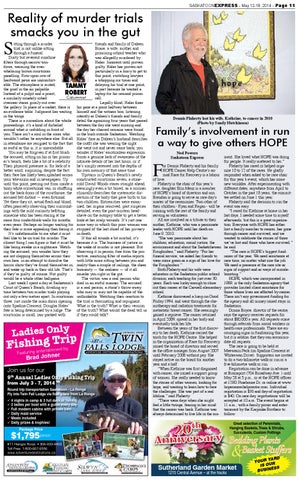 Reality of murder trials smacks you in the gut

itting through a murder friends and family of Daleen trial is not unlike sitting Bosse, a wife, mother and through a funeral. promising school teacher who Dusty but reverent sunshine was allegedly murdered by filters through narrow winHales. Innocent until proven dows, warming the overguilty, Hales has proven not whelming brown courtroom particularly in a hurry to get to panelling. Row upon row of this point, switching lawyers hardwood pews are uncomforta whopping six times and able. The atmosphere is muted, delaying his trial at one point, the grief in the air palpable. in part because he wanted a Instead of a pulpit and a priest, laptop for his remand prison Columnist a similarly ornately robed cell. overseer stares grimly out over Legally blind, Hales fixes the gallery. In place of a casket, there is his gaze at a point halfway between an evidence table. Judgment lies waiting himself and the witness box, listening in the wings. intently as Daleen’s friends and family There is a surrealism about the whole detail the agonizing four years that passed proceedings; it’s a kind of disbelief between the day she went missing and around what is unfolding in front of the day her charred remains were found you. There isn’t a soul in the room who in the bush outside Saskatoon. Watching wouldn’t rather be anywhere else. But all Hales’ face as Daleen’s husband describes in attendance are resigned to the fact that the outfit she was wearing the night as awful as this is, it is unavoidable. she went out and never came back, you You may be forgiven if at first blush wonder if Hales’ emotionless expression the accused, sitting on his or her prison- fronts a genuine lack of awareness of the er’s bench, feels like a bit of a celebrity. intimate details of her last hours, or if Their physical presence is, for lack of a he’s simply recessed into the depths of better word, surprising, despite the fact his own memory of that same time. their face has likely been splashed across Upstairs in Queen’s Bench’s newly your television and in newspapers. Up constructed courtroom seven, a stoneuntil this point, peering out from inside a cold David Woods stares straight ahead, boxy white correctional van, or shuffling seemingly even a bit bored, as a coroner out the back doors of the courthouse, the clinically describes the systematic disaccused felt distant — even fictional. section of the body that gave birth to his Yet there they sit, actual flesh and blood, two children. Extremities were examoften passively observing their surround- ined, her organs removed, past surgeries ings with the mild curiosity befitting detailed, even the post-mortem headsomeone who has been staring at the shave on the autopsy table to get a better same four cinderblock walls for months, look at her scalp wounds. It’s just one even years. Perhaps no longer waiting for more way in which this poor woman was their fate is more appealing than facing it. stripped of the last shred of her privacy It’s unfathomable to me what it must in death. feel like to be on trial for murder. The If this all sounds a bit morbid, it’s closest thing I can figure is that it must be because it is. The business of justice in like being awake in a nightmare. Watch- the wake of murder is not pleasant. But ing the accused, you wonder how they observing it in person, free from the proare not slapping themselves across their tective, sanitizing filter of media reports, own face, in an attempt to dissolve the with little more sitting between you and horror show they’ve found themselves in, reality than a couple of railings, the sheer and wake up back in their old life. That’s humanity — the realness — of it all if they’re guilty, of course. Not guilty smacks you right in the gut. would be a whole other ballgame. The victim was a real person who Last week I spent a day at Saskatoon’s died in an awful manner. The accused Court of Queen’s Bench, dividing my is a real person, a stone’s throw away, time between two murder trials playing who may or may not be capable of the out only a few metres apart. In courtroom unthinkable. Watching their reaction to three, just inside the main doors opening the trial is fascinating and repugnant. onto Spadina Crescent, Douglas Hales’ What is the truth? What is their version fate is being determined by a judge. The of the truth? What would the dead tell us courtroom is small, jam-packed with if they could talk?

Join us for our

Dennis Flaherty lost his wife, Kathrine, to cancer in 2010 (Photo by Sandy Hutchinson)

Family’s involvement in run a way to give others HOPE

or Dennis Flaherty and his family, HOPE Cancer Help Centre’s annual Race for Recovery is a labour of love. Flaherty is the chair of this year’s race, daughter Erin Menz is a member of HOPE’s board of directors and son Brendan is going to serve as race day’s master of the ceremonies. Two other of their children - Ryan and Regan - will be running with the rest of the family and serving as volunteers. All are involved as a tribute to their mother, Kathrine, who was a passionate leader with HOPE until her death on June 9, 2010. “She was passionate about her children, education, social justice, the environment and about the Saskatchewan Roughriders,” said Flaherty. “For her funeral service, we asked her friends to wear some green as a sign of her love for the Roughriders.” Both Flaherty and his wife were educators in the Saskatoon public school division, each teaching for just over 30 years. Each was lucky enough to close out their career at the Caswell elementary school. Kathrine discovered a lump on Good Friday 1994, and went through the chemotherapy and radiation treatments for metastatic breast cancer. She seemingly gained a reprieve. The cancer returned in April 2009, spread in her body and eventually took her life. Between the years of the first discovery to her death, Kathrine carried the torch for the HOPE Centre. She helped in the organization of Race for Recovery, joined the board of directors and served as the office manager from August 2007 until February 2008 without pay. She stayed active on the board for another year and a half. “When Kathrine was first diagnosed with cancer, she joined a support group of women. She really needed to know the stories of other women, looking for hope, and wanting to learn how to face the challenges. She was part of a real lifeline,” said Flaherty. “There were days when she might feel a little twinge, fearing in her mind that the cancer was back. Kathrine was always determined to live life in the moCP90064.E12 Chenise

ment. She loved what HOPE was doing for people. It really mattered to her.” Flaherty has raced or helped organize 10 to 12 of the races. He gladly responded when asked to be race chair for this year’s event, which has some new wrinkles. After experimenting with different dates, anywhere from April to October in the past 18 years, the committee settled on June 1 this year. Flaherty said the decision to run the event was easy. “I cared for Kathrine at home in her last days. I needed some time to myself afterwards, but this is a great organization. Everyone with HOPE has either lost a family member to cancer, has gone through cancer and survived, and we wanted to celebrate the stories of those we’ve lost and those who have survived,” he said. “The race is HOPE’s biggest fundraiser of the year. We need assistance at race time, no matter what size the job. We need a presence at the race site as signs of support and as ways of moraleboosting.” HOPE, which was incorporated in 1989, is the only Saskatoon agency that provides limited client assistance for those whose lives are affected by cancer. There isn’t any government funding for the agency and all money raised stays in Saskatoon. Donna Boyce, director of the centre, says the agency receives requests for about $80,000 a year. All requests come through referrals from social workers or health-care professionals. There are encouraging signs in fundraising this year, but it is seldom that they can accommodate all requests. The race is going to be held at Meewasin Park (on Spadina Crescent at Whiteswan Drive). Supporters are invited to do a two-kilometre walk or run or a five-kilometre walk or run. Registration can be done in advance at Brainsport (704 Broadway Ave. ) until May 28 at 5 p.m., or at the HOPE offices at 129D Pinehouse Dr. or online at www. hopecancerhelpcentre.com. Individual registration is $35 and day-of registration is $40. On race day, registrations will be accepted at 10 a.m. The event begins at 11 a.m., with a family picnic and entertainment by the Karpinka Brothers to follow.