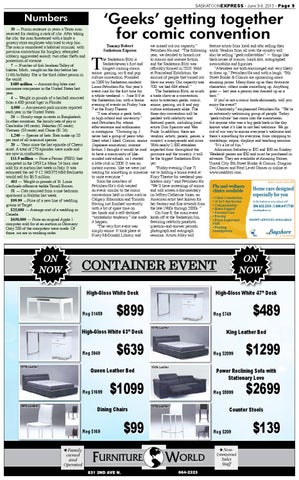 ‘Geeks’ getting together for comic convention

Numbers 50 — Prison sentence in years a Texas man received for stealing a rack of ribs. After taking the ribs, the man threatened with a knife a grocery store employee who tried to stop him. The man is considered a habitual criminal, with previous convictions for burglary, attempted robbery, aggravated assault, two other thefts and possession of cocaine. 7 — Number of fish Jeralean Talley of Inkster, Mich., caught on the day before her 114th birthday. She is the third oldest person in the world. $489 million — Amount dog bites cost insurance companies in the United States last year. 4 — Weight in pounds of a hairball removed from a 400-pound tiger in Florida. 4,000 — Amusement park injuries reported each year in the United States. 24 — Hourly wage in cents in Bangladesh. In other countries, the hourly rate of pay is: Cambodia (45 cents), Pakistan (52 cents), Vietnam (53 cents) and China ($1.26). 1,240 — Species of bats. Bats make up 20 per cent of all mammal species. 20 — Years since the last episode of Cheers aired. A total of 275 episodes were made and are now in syndication. $11.9 million — Price a Ferrari (FERI) that competed in the 1953 Le Mans 24-hour race sold for at auction last week in Italy. It was estimated the red V-12 340/375 MM Berlinetta would sell for $6.5 million. 403 — Weight in pounds of St. Louis Cardinals offensive tackle Terrell Brown. 51 — Cats removed from a one-bedroom apartment in Halifax last week. $99.99 —Price of a new line of wedding gowns at Target. $25,000 — Average cost of a wedding in Canada. $650,000 — Price an original Apple 1 computer sold for at an auction in Germany. Only 200 of the computers were made. Of those, six are in working order.

he Saskatoon Blitz is Saskatchewan’s first and longest-running comic, anime, gaming, sci-fi and pop culture convention. Founded in 2009 by Saskatoon resident Laura Petrishen-Ha, this year’s event runs for the first time for a whole weekend — June 8-9 at the Saskatoon Inn, with a bonus evening of events on Friday June 7 at the Roxy Theatre. “I was always a geek, both in high school and university,” said Petrishen-Ha, whose effervescence and enthusiasm is contagious. “Growing up, I never had a group of peers who liked what I liked: Comics, anime (Japanese animation), science fiction. I thought it would be cool to have a community of likeminded individuals, so I started a little club in 2008. It was an instant success, like we were just waiting for something or someone to unite everyone.” Soon the members of Petrishen-Ha’s club wanted an event, similar to the comic conventions held in cities such as Calgary, Edmonton and Toronto. Having just finished university, with a bit of spare time on her hands and a self-declared “workaholic tendency,” she made it happen. “The very first event was simply anime. It took place at Rusty McDonald Library, and

we maxed out our capacity,” Petrishen-Ha said. “The following year, we decided to branch out to comics and science fiction, and the Saskatoon Blitz was officially formed in 2010. Held at Prairieland Exhibition, the amount of people that turned out blew me away. Our capacity was 700; we had 684 attend.” The Saskatoon Blitz, as much a trade show as a convention, aims to entertain geeks, comic, anime, gaming, sci-fi and pop culture enthusiasts alike. The three-day convention will be packed with celebrity and featured guests, including local artists Don Sparrow and Wes Funk. In addition, there are vendors, artists, panels, games, a concert, a masquerade and more. With nearly 2,500 attendees expected from throughout the province and the country, it will be the biggest Saskatoon Blitz yet. “Friday evening (June 7) we’re holding a bonus event at Roxy Theatre for weekend-pass holders only,” said Petrishen-Ha. “We’ll have screenings of anime, and will screen a documentary on Jeffrey Catherine Jones, an American artist best known for her fantasy and fine artwork from the late 1960s through 2000s.” On June 8, the main event kicks off at the Saskatoon Inn, featuring celebrity panelists, question-and-answer periods, photograph and autograph sessions. Artists Alley will

feature artists from local and afar selling their work. Vendors from all over the country will also be selling “geek collectables” — things like back issues of comics, lunch kits, autographed memorabilia and figurines. “Attendees are both encouraged and very likely to dress up,” Petrishen-Ha said with a laugh. “8th Street Books & Comics are sponsoring some amazing prizes. Many dress up as their favourite characters; others make something up. Anything goes — last year a person was dressed up as a taco.” If you’re not a comic book aficionado, will you enjoy the event? “Absolutely,” emphasized Petrishen-Ha. “We’re an extremely welcoming group of people. Today ‘geek culture’ has come into the mainstream, but anyone who was a big geek back in the day knows what it’s like to not feel welcome. We go out of our way to ensure everyone’s welcome and there’s something for everyone, from shopping to workshops, expos, displays and teaching sessions. “It’s a lot of fun.” Admission Saturday is $32 and $30 on Sunday. Weekend passes are $50 and must be purchased in advance. They are available at Amazing Stories, Unreal City, 8th Street Books & Comics, Dragons Den Games and Next Level Games or online at www.saskblitz.com.