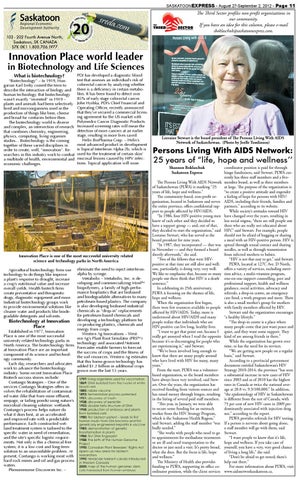 The Third Sector profiles non-profit organizations in our community. If you have an idea for this column, please e-mail sboklaschuk@saskatoonexpress.com.

PDI has developed a diagnostic blood test that assesses an individual’s risk of “Biotechnology” – In 1919, Huncolorectal cancer by analyzing whether garian Karl Ereky coined the term to describe the interaction of biology and there is a deficiency in certain metabolites. It has been found to detect over human technology. But biotechnology 85% of early stage colorectal cancer. wasn’t exactly “invented” in 1919 – plants and animals had been selectively John Hyshka, PDI’s Chief Financial and Operating Officer, recently announced bred and microorganisms used in the that they’ve secured a commercial licensproduction of things like beer, cheese ing agreement for the US market with and bread for centuries before then. Polymedco Cancer Diagnostic Products. The biotechnology world is diverse and complex, an intersection of research Increased screening rates will mean the detection of more cancers at an earlier that combines chemistry, engineering, stage, resulting in more lives saved. physics, computing, living organism Helix BioPharma Corp. – Helix’s studies... Biotechnology is the coming most advanced product in development together of these varied disciplines in is Topical Interferon Alpha-2b, which is order to create, well, “innovation”. Researchers in this industry work to combat used for the treatment of certain skin/ a multitude of health, environmental and mucosal lesions caused by HPV infections. Topical application will soon economic challenges.

Innovation Place is one of the most successful university related science and technology parks in North America eliminate the need to inject interferonalpha by syringe. Metabolix – Metabolix, Inc. is developing and commercializing Mirel™ biopolymers, a family of high-performance bioplastics that are biobased and biodegradable alternatives to many petroleum-based plastics. The company is also developing biobased industrial chemicals as “drop-in” replacements for petroleum-based chemicals and developing a technology platform for Biotechnology at Innovation co-producing plastics, chemicals and Place energy from crops. Established in 1977, Innovation Western Ag Innovations – WestPlace is one of the most successful ern Ag’s Plant Root Simulator (PRS™) university related technology parks in technology and associated Nutrient North America. The biotechnology firms Forecaster enable farmers to forecast at Innovation Place are an important the success of crops and the fitness of component of its science and technolthe soil resources. Western Ag estimates ogy community. that this home-grown technology has Each day, researchers and advocates added $1.2 billion in additional crops work to advance the biotechnology grown over the last 15 years. industry. Some recent Innovation Place Biotech success stories include: Contango Strategies – One of the services Contango Strategies offers involves the rehabilitation of contaminated water (like that from mine effluent, seepage, or tailing ponds) using nature’s microbial cleaning solution: wetlands. Contango’s process helps nature do what it does best, at an accelerated and improved rate with a predictable performance. Each constructed wetland treatment system is tailored to the specific water in need of remediation, and the site’s specific logistic requirements. Not only is this a chemical-free system, it is a low-cost and long-term solution to an unavoidable problem. At present, Contango is working most with hard rock mines and oil and gas process waters. Phenomenome Discoveries Inc. – Agricultural biotechnology firms use technology to do things like improve a plant’s response to drought, increase a crop’s nutritional value and increase overall yields. Health biotech firms create preventative and therapeutic drugs, diagnostic equipment and more. Industrial biotechnology groups work to provide environmental solutions like cleaner water and products like biodegradable detergents and solvents.

Lorraine Stewart is the board president of The Persons Living With AIDS Network of Saskatchewan. (Photo by Joelle Tomlinson)

Persons Living With AIDS Network: 25 years of “life, hope and wellness’’ Shannon Boklaschuk Saskatoon Express The Persons Living With AIDS Network of Saskatchewan (PLWA) is marking “25 years of life, hope and wellness.” The community-based, non-profit organization, located in Saskatoon and serves the entire province, offers confidential support to people affected by HIV/AIDS. “In 1986, four HIV-positive young men knew of each other and they decided to have a support group — and, out of that, they decided to start the organization,” said Lorraine Stewart, who has served as the board president for nine years. “In 1987, they incorporated — that was in November — and they formed a board shortly afterwards,” she said. “Two of the fellows that were HIVpositive at that time are still alive and well; one, particularly, is doing very, very well. We like to emphasize that, because so many people out there think that HIV is a death sentence.” In celebrating its 25th anniversary, PLWA is focusing on the themes of life, hope and wellness. When the organization first began, there were few resources available to people affected by HIV/AIDS. Today, more is understood about HIV/AIDS and many people realize that individuals who are HIV-positive can live long, healthy lives. “I want to get that point out, because I really get annoyed when I read the opposite because it’s so discouraging for people who are experiencing it,” said Stewart. “We’ve been involved long enough to know that there are many people around who have lived with HIV for many, many years.” From the start, PLWA was a volunteerbased organization, so the board members have always been very involved, said Stewart. Over the years, the organization has received funding from various sources and has raised money through bingos, resulting in the hiring of several paid staff members. “This year, in January, we were able to secure some funding for an outreach worker from the HIV Strategy Program, which is the Saskatoon Health Region,” said Stewart, adding the staff member “was badly needed.” “She works with people who need to go to appointments for methadone treatments or are ill and need transportation to the doctor or just need a visit. It’s pretty broad, what she does. But the focus is life, hope and wellness.” The Ministry of Health also provides funding to PLWA, supporting its office coordinator position, while the client services

coordinator position is paid for through bingo fundraisers, said Stewart. PLWA currently has three staff members and a fivemember board, as well as three members at large. The purpose of the organization is “to create a positive attitude and engender a feeling of hope for persons with HIV/ AIDS, including their friends, families and partners,” according to its website. While society’s attitudes toward HIV have changed over the years, resulting in less social stigma, “there are still people out there who are really not educated about HIV,” said Stewart. For example, people should not be afraid of hugging or sharing a meal with an HIV-positive person. HIV is spread through sexual contact and sharing needles, as well as through transmission from infected mothers to babies. “HIV is not that easy to get,” said Stewart. PLWA, located at 127C Ave. D North, offers a variety of services, including nutrition advice, a multi-vitamins program, one-on-one support counselling, peer and professional support, health and wellness guidance, social activities, advocacy and referrals, a drop-in centre, an emergency care fund, a work program and more. There is also a small mother’s group for mothers with family members affected by HIV. Stewart said the organization encourages “a healthy lifestyle.” “The drop-in centre is a place where many people come that just want peace and quiet, and they want some support. They kind of are among friends in there.” While the organization has grown over time, so has the need for its services. “We are getting new people on a regular basis,” said Stewart. According to a provincial government document entitled Saskatchewan’s HIV Strategy 2010-2014, the province “has seen a substantial increase in new cases of HIV since 2003 and as of 2010 has the highest rates in Canada at twice the national average at 20.8 vs. 9.3/100,000.” In addition, “the epidemiology of HIV in Saskatchewan is different from the rest of Canada, with 75 per cent of new HIV cases in 2009 predominantly associated with injection drug use,” according to the report. PLWA provides referrals for HIV testing. If a person is nervous about going alone, a staff member will go with them, said Stewart. “I want people to know that it’s life, hope and wellness. If you take care of yourself, you have a very, very good chance of living a long life,” she said. “Don’t be afraid to get tested; there’s help out there.” For more information about PLWA, visit www.aidsnetworksaskatoon.ca. 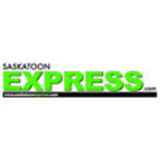