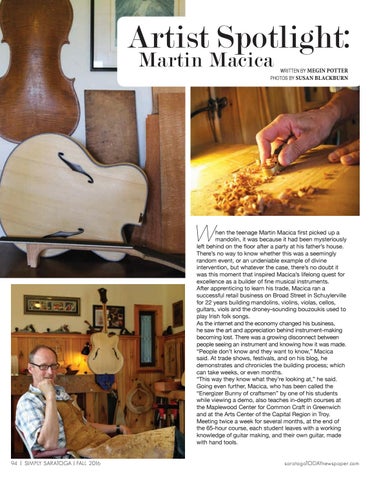 hen the teenage Martin Macica first picked up a mandolin, it was because it had been mysteriously left behind on the floor after a party at his father’s house. There’s no way to know whether this was a seemingly random event, or an undeniable example of divine intervention, but whatever the case, there’s no doubt it was this moment that inspired Macica’s lifelong quest for excellence as a builder of fine musical instruments. After apprenticing to learn his trade, Macica ran a successful retail business on Broad Street in Schuylerville for 22 years building mandolins, violins, violas, cellos, guitars, viols and the droney-sounding bouzoukis used to play Irish folk songs. As the internet and the economy changed his business, he saw the art and appreciation behind instrument-making becoming lost. There was a growing disconnect between people seeing an instrument and knowing how it was made. “People don’t know and they want to know,” Macica said. At trade shows, festivals, and on his blog, he demonstrates and chronicles the building process; which can take weeks, or even months. “This way they know what they’re looking at,” he said. Going even further, Macica, who has been called the “Energizer Bunny of craftsmen” by one of his students while viewing a demo, also teaches in-depth courses at the Maplewood Center for Common Craft in Greenwich and at the Arts Center of the Capital Region in Troy. Meeting twice a week for several months, at the end of the 65-hour course, each student leaves with a working knowledge of guitar making, and their own guitar, made with hand tools.