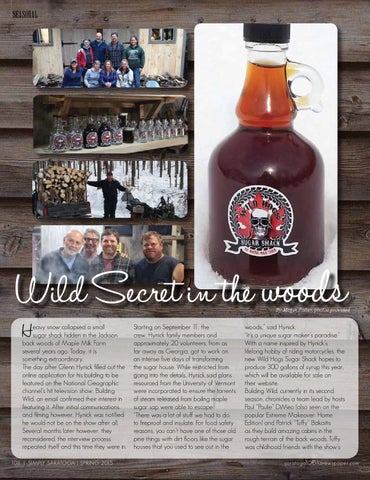 Wild Secret in the woods

eavy snow collapsed a small sugar shack hidden in the Jackson back woods of Maple Milk Farm several years ago. Today, it is something extraordinary. The day after Glenn Hynick filled out the online application for his building to be featured on the National Geographic channel’s hit television show; Building Wild, an email confirmed their interest in featuring it. After initial communications and filming however, Hynick was notified he would not be on the show after all. Several months later however, they reconsidered, the interview process repeated itself and this time they were in.

Starting on September 11; the crew, Hynick family members and approximately 20 volunteers, from as far away as Georgia, got to work on an intense five days of transforming the sugar house. While restricted from going into the details, Hynick said plans resourced from the University of Vermont were incorporated to ensure the torrents of steam released from boiling maple sugar sap were able to escape. “There was a lot of stuff we had to do, to fireproof and insulate. For food safety reasons, you can’t have one of those old pine things with dirt floors like the sugar houses that you used to see out in the

woods,” said Hynick. “It’s a unique sugar maker’s paradise.” With a name inspired by Hynick’s lifelong hobby of riding motorcycles, the new Wild Hogs Sugar Shack hopes to produce 300 gallons of syrup this year, which will be available for sale on their website. Building Wild, currently in its second season, chronicles a team lead by hosts Paul “Paulie” DiMeo (also seen on the popular Extreme Makeover: Home Edition) and Patrick “Tuffy” Bakaitis as they build amazing cabins in the rough terrain of the back woods. Tuffy was childhood friends with the show’s