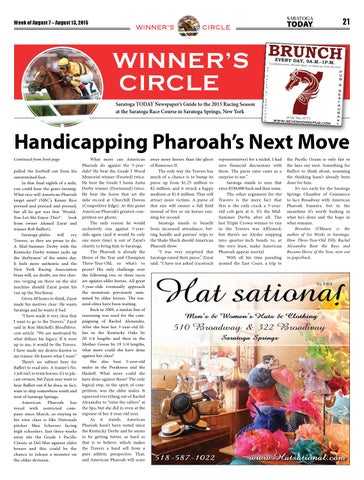 Handicapping Pharoah’s Next Move Continued from front page pulled the football out from his outstretched foot. In that final eighth of a mile, you could hear the gears turning: What race will American Pharoah target next? (NBC’s Kenny Rice pressed and pressed and pressed, but all he got was that ‘WouldYou-Let-Me-Enjoy-This?’ look from owner Ahmed Zayat and trainer Bob Baffert). Saratoga-philes will cry Travers, as they are prone to do. A Mid-Summer Derby with the Kentucky Derby winner jacks up the ‘derbyness’ of the entire day. It feels more authentic and the New York Racing Association brass will, no doubt, see two cherries verging on three on the slot machine should Zayat point his van up the Northway. Given 48 hours to think, Zayat made his motives clear: He wants Saratoga and he wants it bad. “I have made it very clear that I want to go to the Travers,” Zayat said in Ron Mitchell’s BloodHorse. com article. “We are motivated by what defines his legacy. If it were up to me, it would be the Travers. I have made my desires known to my trainer. He knows what I want.” There’s no subtext here for Baffert to read into. A trainer’s No. 1 job isn’t to train horses, it’s to placate owners, but Zayat may want to hear Baffert out if he does, in fact, want to ship somewhere south and west of Saratoga Springs. American Pharoah has toyed with restricted company since March, so staying in his own class is like Nationals pitcher Max Scherzer facing high schoolers. Just three weeks away sits the Grade 1 Pacific Classic at Del Mar against older horses and this could be the chance to release a monster on the older division.

What more can American Pharoah do against the 3-yearolds? He beat the Grade I Wood Memorial winner (Frosted) twice. He beat the Grade I Santa Anita Derby winner (Dortmund) twice. He beat the horse that set the mile record at Churchill Downs (Competitive Edge). At this point American Pharoah’s greatest competition are ghosts. The only reason he would exclusively run against 3-yearolds again (and it would be only one more time) is out of Zayat’s charity to bring him to Saratoga. The Pharoah is already the Horse of the Year and Champion Three-Year-Old, so what’s to prove? His only challenge over the following two or three races are against older horses. All great 3-year-olds eventually approach the mountain previously summited by older horses. The tenured elites have been waiting. Back in 2009, a similar line of reasoning was used for the campaigning of Rachel Alexandra. After she beat her 3-year-old fillies in the Kentucky Oaks by 20 1/4 lengths and then in the Mother Goose by 19 1/4 lengths, what more could she have done against her class? She also beat 3-year-old males in the Preakness and the Haskell. What more could she have done against them? The only logical step, in the spirit of competition, was the older males. It squeezed everything out of Rachel Alexandra to “raise the rafters” at the Spa, but she did it, even at the expense of her 4-year-old year. As it stands, American Pharoah hasn’t been tested since the Kentucky Derby and he seems to be getting better, as hard as that is to believe, which makes the Travers a hard sell from a pure athletic perspective. That, and American Pharoah will scare

away more horses than the ghost of Ramesses II. The only way the Travers has much of a chance is to bump its purse up from $1.25 million to $2 million, and it struck a happy medium at $1.6 million. That will attract more victims. A purse of that size will ensure a full field instead of five or six horses running for second. Saratoga stands to benefit from increased attendance, betting handle and patrons’ trips to the Shake Shack should American Pharoah show. “I was very surprised that Saratoga raised their purse,” Zayat said. “I have not asked (racetrack

representatives) for a nickel. I had zero financial discussions with them. The purse raise came as a surprise to me.” Saratoga stands to earn that extra $350,000 back and then some. The other argument for the Travers is the mere fact that this is the only crack a 3-yearold colt gets at it. It’s the MidSummer Derby, after all. The last Triple Crown winner to run in the Travers was Affirmed, but there’s no Alydar stepping into quarter-inch bends to, at the very least, make American Pharoah appear mortal. With all his time parading around the East Coast, a trip to

the Pacific Ocean is only fair to the fans out west. Something for Baffert to think about, assuming the thinking hasn’t already been done for him. It’s too early for the Saratoga Springs Chamber of Commerce to lace Broadway with American Pharoah banners, but in the meantime it’s worth basking in what he’s done and the hope in what remains. Brendan O’Meara is the author of Six Weeks in Saratoga: How Three-Year-Old Filly Rachel Alexandra Beat the Boys and Became Horse of the Year, now out in paperback.