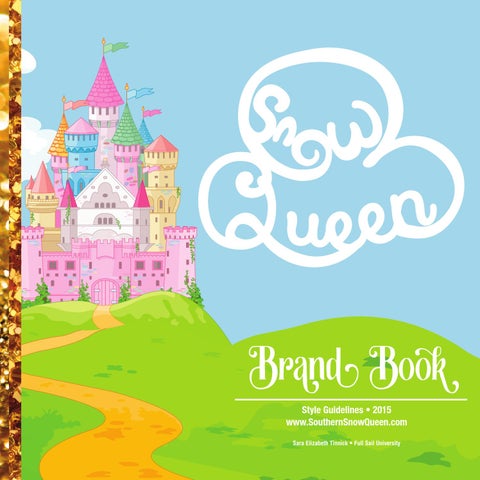 is a magical place that captures all the magic of the ice cream parlor, filled with polished, gleaming silver spoons, glittering dishes topped with mountains of ice cream capped with delectable, gooey hot fudge and mounds of whipped cream await those who discover our dominion. Nothing can beat the southern heat like stepping into a chilled parlor for a cool treat of majestic proportions.

a frozen palace full of sugar majesty. Southern hospitality is showcased at every turn: gentlemen still pull out vinyl tufted chairs for their ladies, instantly turning into Prince Charming over a classic hand-spun milkshake with two red and white striped straws. does not want you to simply step back in time, we want to transport you to a magical realm of gumdrops and ice cream.

Snow Queen was created by Matt and

Lucy, sweethearts who fell in love at Disneyland, and never let that magic fade. Lucy was a tremendously talented chef who learned from her grandmother Lula in Alabama. Lucy spent summers in at Gram’s kitchen fetching various fruits and confections from town while Gram worked happily in her hot, steamy kitchen. These were some of Lucy’s fondest memories. After growing up and moving away from Alabama, Matt and Lucy happened upon an old prop shop in the downtown cultural district in Tampa, Florida. It was full of dresses, wigs, harrowing faces, and even a few torn limbs. Matt and Lucy amused themselves for hours in the shop, and began to chat up the owner. “Business is slow. Places like Amazon and eBay make it so easy to get quality products,” lamented the owner. Matt was leaning across what appeared to be a bar while speaking, and asked the story of the building itself. It turned out it had in fact been a bar: part speakeasy, part ice cream parlor, depending on what would get them in trouble. They were well known for their ice cream, but times change. Matt and Lucy have always been well off, and an idea was sparked and it turned into a winter wonderland of delectable delights for all ages.

Wanting to honor her Grandmother, Lucy decided to focus their new space on selling sweet treats. Matt, the frugal side of the relationship, didn’t want to throw away all of the wonderful treasures found in the shop: there were thrones, a full suit of armor, bow ties that shot water, capes for various superheroes, and wigs. Together, they devised a plan to keep some of the props and repurpose them to create –a magical, family friendly place featuring homemade southern ice cream, just like Grandma Lulu’s. Using Disney as their inspiration, they created a fantasy storyland in ice cream confectionery. Lula is from the north, but is named for her southern grandmother that she often visits. Lula loves the sun, the charm, and the slow place of life in the south. But, it cannot replace her northern family’s legacy and the source of their fame and fortune: Ice cream. Their northern location makes producing ice cream a breeze. During one of her visits, Lula meets Sterling, prince of the Garnet Garret. They fall deeply in love, even though their families are not on the best terms. Sterling wants Lula to move to the south, but she cannot, as her family is the sole producer of ice cream for the whole world, and it is not something she wants to leave behind.

Sterling was an adventurer. He traveled far and wide, still lovesick over Lula. In the deep, dark depths of the Frozen Wasteland, he found Icenor, the legendary jewel known for it’s freezing capabilities. It had been cast into the wasteland because no one could control it’s frigid powers. Sterling set off for home, and came to an abandoned home with a deep well in the basement. After some ingenuity and a little bit of magic, Sterling was able to craft a castle worthy of the beautiful Lulabelle, complete with a magical jewel powered creamery. Lulabelle was over the moon, and they had a lavish wedding, complete with ice cream wedding cake. Lula’s family helped her setup her southern operations, collecting specialists in key southern flavors to work within their kingdom. Not all were happy, however. Sterling’s mother, Scarlet, was devastated that Sterling would marry a northerner, and help create the abomination that is ice cream. The south is hot – and known for all types of baked treats: cobblers, pies, turnovers, and decedent cakes! There was no room for ice cream in the South! Queen Scarlet sought to ruin the new Queen’s kingdom, and sent her fierce but fumbling fire breathing dragon Percy to quench the Icenor Jewel, but each time Percy comically fails, and each time Lula feels so bad she feeds Percy his favorite ice cream, Toasted Marshmallow Crunch.

Snow Queen is a magical place where

imagination and fantasy rule the land; where princesses meet their princes over sprinkles on their milkshakes. Combining southern hospitality with delicious sweet treats, we want the customer to feel like royalty while they are within our establishment. Every character in our magical universe has a story and a signature flavor created by alliteration of their name: things that are fun to say and equally as fun to eat. is a destination, not just a corner ice cream shop. We want the customer to lose themselves in a world of pretend. The outside world is busy, hot, and hectic. Inside the walls of we want everyone to relax and imagine they are part of our royal family. We want smiles on faces, for both customer and employee. We refer to the customer as &quot;Sir&quot; or &quot;Madam,&quot; and we strive to honor client requests. is an experience, from walking in the door into the chilled interior, to ordering a Lauralee Lemon Lickety Split with your special someone. Memories are made when you are transported to a place of fairy tales, magic, and adventure.

When creating copy, talking to customers, or even thinking about Snow Queen, the following terms in mind:

Logo Snow Queen&#39;s logo has been created with a hand drawn font. The typography and line elements connect together to form a scoop of ice cream or a puffy white cloud. These elements cannot be separated or altered. The logo must be shown in it&#39;s entirety. The logo cannot be distorted or stretched. Do not alter the font in the logo. Do not change the size of the typography within in the graphic border.

The interchangeable ending depends upon what is being advertised or showcased. The most commonly used tagline is &quot;It&#39;s never too late... ...for ice cream!&quot; Approved variations to be used at the artist or franchisee discretion:

The tagline should use the Afecta typeface with alternate characters as needed.

Unacceptable Use of gradients as fill or as stroke

Use of textures or patterns in logo

= the basis of the lowercase o in

Snow Queen&#39;s color palettes are light, bright, and in the pastel portion of the color wheel.

Ice Blue is primary hue and should be used if there is doubt about proper color usage.

The five other colors correspond with the ice cream based characters of . These colors are acceptable for use. If a specific character is being used, the color scheme of the piece should be based on that character&#39;s colors. The following list details the colors reserved for each character:

Lauralee: Lemon and Cream Be mindful of colors with low contrast like Cream and Mint on white backgrounds. In some cases these colors may be used as a background color and the text can be knocked out or printed in black. The logo should be shown in Ice Blue as often as possible.

Textures for the ice cream portion of should relate only to ice cream and ice cream products: Icing, popcicles, white chocolate, whipped cream, sprinkles, sugar, ice cream cones, bowls, milkshakes, straws, or yogurt. Imagery of cakes, cookies, other baked goods, coffee, and other hot beverages cannot be included. These items are reserved for the bakery portion of the business and are therefore prohibited from use. Imagery with dark color palettes are also prohibited (See Brand Colors).

Textures should complement the character&#39;s flavor in color and taste. The imagery in the texture should not distract from the focal point of the advertisement. Imagery for textures should focus on a particular area of the image, filling the shape. All textures must be high resolution with no watermarks.

Textures - Glitter Glitter textures are to be used on every

Textures are available in a variety of colors. Be mindful of the light and dark contrast in the glitter texture, as it can interfere with text readability, especially if the text is small. Careful consideration must be given to image frames next to each other, divided by a space. The glitter image must continue seamlessly through the gaps. Artist discretion may be used in deciding what part of the glitter image to use. Imagery that is shot at a distance and is more diffuse will offer less contrast between dark and light. In focus images may cause readability problems. Common applications of the glitter textures are in frames at the top or bottom of the page or as a divider bar.

Shapes When creating shapes for picture frames or color areas, outer edges must be curved with a radius of 0.1233 in. Inside edges remain square. If an image is next to another image, the edges remain square. When the format allows, color and shapes should bleed off of the page. When a bleed cannot occur, the outer edges of the shape should be rounded. Shape elements are limited to squares with the appropriate corner rounding, rectangles with the appropriate corner rounding, and perfect circles. A stroke around a color shape is permitable, especially when the image lacks contrast between it and the background. Strokes must be a solid color. Drop shadows, glows, or gradients are not permitted on any shape, whether it contains and image or color.

Imagery for must communicate fun, whimsy, and delicious delights through their color, framing, and content. No low-resolution imagery may be used. No poorly lit, under exposed, over exposed, or poor quality images maybe used. Imagery will be used in a close or zoomed in format, cropped with a rounded corner, square corner, or circular frame. A minimum amount of background should be shown. One image should have it&#39;s background removed completely to create a custom edge through clipping masks. Clipping masks must be made carefully to preserve edge quality. Imagery should complement the character&#39;s flavor and color palette. Imagery must be bright and vivid in color. Photoshop may be needed to enhance the color and contrast of imagery.

No! Grayscale imagery cannot be used unless the ad will be printed in grayscale. Imagery of food must look appetizing and fresh. An image of ice cream or a related items must be included in every layout in some way. There should be on dessert image that is prominent. It also must related to the character of the ad. Imagery should be of objects with no human elements included. Each character has a specific typographic treatment for their names. These images cannot be modified, recolored, or separated.

Inkredible Script ABCDEFGHIKLMNOPQRSTUVWXYZ • abcdefghiklmnopqrstuvwxyz 01234567890!@$% Custom Kerning When using Inkredible Script, be mindful of the connecting swashes. If the kerning is too loose, the letters will not connect. Some letter pairs may require a baseline shift in order to connect letters.

Cake &amp; Ice Cream for everyone!