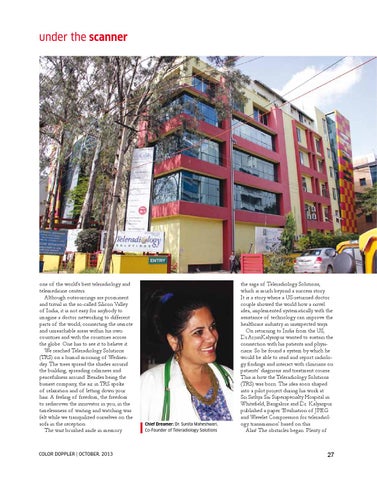 one of the world’s best teleradiology and telemedicine centers. Although outsourcings are prominent and trivial in the so-called Silicon Valley of India, it is not easy for anybody to imagine a doctor networking to different parts of the world, connecting the remote and unreachable areas within his own countries and with the countries across the globe. One has to see it to believe it. We reached Teleradiology Solutions (TRS) on a humid morning of Wednesday. The trees spread the shades around the building, spreading calmness and peacefulness around. Besides being the busiest company, the air in TRS spoke of relaxation and of letting down your hair. A feeling of freedom, the freedom to rediscover the innovator in you, in the timelessness of waiting and watching was felt while we tranquilized ourselves on the sofa in the reception. The wait brushed aside in memory

the saga of Teleradiology Solutions, which is much beyond a success story. It is a story where a US-returned doctor couple showed the world how a novel idea, implemented systematically with the assistance of technology can improve the healthcare industry in unexpected ways. On returning to India from the US, Dr.ArjunKalyanpur wanted to sustain the connection with his patients and physicians. So he found a system by which he would be able to read and report radiology findings and interact with clinicians on patients’ diagnosis and treatment course. This is how the Teleradiology Solutions (TRS) was born. The idea soon shaped into a pilot project during his work at Sri Sathya Sai Superspecialty Hospital in Whitefield, Bangalore and Dr. Kalyanpur published a paper ‘Evaluation of JPEG and Wavelet Compression for teleradiology transmission’ based on this. Alas! The obstacles began. Plenty of

Color Doppler brings out the hypersonic movements in the field of teleradiology in October issue. An insight on the latest technologies, devices, challenges and leading companies in the field of teleradiology waits to enrich the readers. Interview with Dr. Arjun Kalyanpur, Chief Pusher of Teleradiology Solutions sheds a practical comprehension to the sector. The talk with Dr. Ponnada Narayana, the recipient of the 2013 Distinguished Investigator Award of Academy of Radiology Research, and reviews of PACE 2013 and FETAL Medicine 2013 further add up to this knowledge feast. 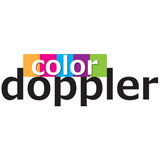