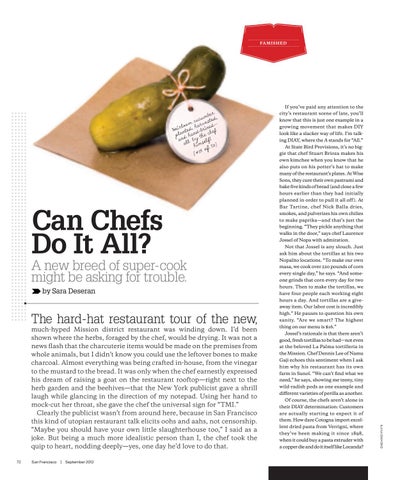 If you’ve paid any attention to the city’s restaurant scene of late, you’ll know that this is just one example in a growing movement that makes DIY look like a slacker way of life. I’m talking DIAY, where the A stands for “All.” At State Bird Provisions, it’s no biggie that chef Stuart Brioza makes his own kimchee when you know that he also puts on his potter’s hat to make many of the restaurant’s plates. At Wise Sons, they cure their own pastrami and bake five kinds of bread (and close a few hours earlier than they had initially

A new breed of super-cook might be asking for trouble. by Sara Deseran

planned in order to pull it all off ). At Bar Tartine, chef Nick Balla dries, smokes, and pulverizes his own chilies to make paprika—and that’s just the beginning. “They pickle anything that walks in the door,” says chef Laurence Jossel of Nopa with admiration. Not that Jossel is any slouch. Just ask him about the tortillas at his two Nopalito locations. “To make our own masa, we cook over 220 pounds of corn every single day,” he says. “And someone grinds that corn every day for two hours. Then to make the tortillas, we have four people each working eight hours a day. And tortillas are a giveaway item. Our labor cost is incredibly

The hard-hat restaurant tour of the new,

sanity. “Are we smart? The highest thing on our menu is $16.” Jossel’s rationale is that there aren’t good, fresh tortillas to be had—not even at the beloved La Palma tortilleria in the Mission. Chef Dennis Lee of Namu Gaji echoes this sentiment when I ask him why his restaurant has its own farm in Sunol. “We can’t find what we need,” he says, showing me teeny, tiny wild-radish pods as one example and diﬀerent varieties of perilla as another. Of course, the chefs aren’t alone in their DIAY determination: Customers are actually starting to expect it of them. How dare Cotogna import excellent dried pasta from Verrigni, where they’ve been making it since 1898, when it could buy a pasta extruder with a copper die and do it itself like Locanda?

much-hyped Mission district restaurant was winding down. I’d been shown where the herbs, foraged by the chef, would be drying. It was not a news flash that the charcuterie items would be made on the premises from whole animals, but I didn’t know you could use the leftover bones to make charcoal. Almost everything was being crafted in-house, from the vinegar to the mustard to the bread. It was only when the chef earnestly expressed his dream of raising a goat on the restaurant rooftop—right next to the herb garden and the beehives—that the New York publicist gave a shrill laugh while glancing in the direction of my notepad. Using her hand to mock-cut her throat, she gave the chef the universal sign for “TMI.” Clearly the publicist wasn’t from around here, because in San Francisco this kind of utopian restaurant talk elicits oohs and aahs, not censorship. “Maybe you should have your own little slaughterhouse too,” I said as a joke. But being a much more idealistic person than I, the chef took the quip to heart, nodding deeply—yes, one day he’d love to do that.

high.” He pauses to question his own

Whether or not the pasta is superior is besides the point. For both diners and chefs, the romantic notion of everything being made under one roof is all the proof they need. And food writers—myself included—lap it up. But there is a downside to this noble crusade. Fatted Calf charcuterie maker Taylor Boetticher is right when he warns, “You can’t be an expert at everything. And balancing labor and raw goods is part of being a good chef.” In other words, if overly high food and labor costs aren’t being passed on to customers, they’re being eaten by the restaurants, which—in the wrong hands—can be an unsavvy business practice. The Shutter column on Eater has its share of tales of restaurateurs who have overreached in the name of ego. I don’t mean to discourage chefs who find all of this to be a creative challenge. It’s also clearly a good way for a restaurant to set itself apart from the fierce competition. But the self-imposed pressure to produce every little thing in house could drive a chef to drink. Jossel sheepishly admits that he was “a little embarrassed” that Nopa has actually served fresh mozzarella hand-pulled by someone else. But look: In the restaurant world, there’s nothing wrong with a little outsourcing. Sure, there’s something quintessentially American about going it alone. Why buy apple pie from someone else when you can bake it yourself ? But supporting artisans within one’s own community is an act that should make locavores proud. And who knows? The end product might even be tastier. Gerald Hirigoyen, the chef-owner of Piperade, grew up in the French Basque country, where restaurants get their charcuterie from the charcuterie maker, and bread from the baker. “For 25 years, I’ve had someone making my gâteau Basque,” he says of one of his more coveted desserts. “I made the decision that hers is better than mine. I have no shame, and unless you have an army to make everything for you, it’s tough. You have to make money, too.” Ah, money—the five-letter word that DIAY chefs are loath to utter. A restaurateur admitting that he or she wants to turn a profit kind of sours the goats-onthe-rooftop ethos. But I’d rather chefs outsource their hamburger buns if it for the long haul. My utopia? A world where the word sustainable is applied to both business and food. 74

Is bacon that’s made in-house at a restaurant better than what’s available from a butcher—or a supermarket? We brought together a chef, a butcher shop owner, and a food publicist* to do a blind tasting and let their taste buds make the call. ( PICTURED IN RANKING ORDER )

WINNER: Beast and the Hare

MEAT AND METHOD Pork from Riverdog, Stone Valley, or others smoked over fruitwood for six hours JUDGES’ NOTES “Chewy.” “Salty. Hamlike.” “Meaty.” AT THE TUESDAY FERRY PLAZA FARMERS MARKET [B]

MEAT AND METHOD Pork from their own ranch smoked over apple wood for an hour and cooked for two JUDGES’ NOTES “Meaty and chewy.” “Typical bacon.” “Very plain.” AT THE SATURDAY FERRY PLAZA FARMERS MARKET [B]

means that their restaurants stay open 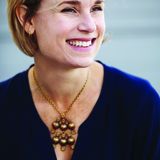 A new breed of super-cook might be asking for trouble.

A new breed of super-cook might be asking for trouble.