Disability in a World of Creativity : A Visual Translation 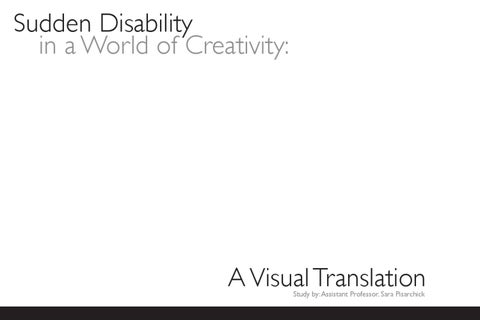 Sudden Disability in a World of Creativity:

The photography in this journal was taken by the

The participant was asked to shoot photographic

images that represented her feelings and

text descriptions. Some were shot on a college

recollection of life as a creative individual who

campus with a camera provided by the researcher.

developed a sudden disability. She was then

Others were shot in the personal dwelling of

asked to choose the photos that most accurately

depicted the phenomenon and explain each

The study aims to explore the phenomenon of a

through a written journal style explanation.

creative individual that experienced a sudden disability. This book is an artifact created from photos and text that recorded the participant in the midst of visual creation. This creation fostered an environment leading to representation through creativity. It joined a physical act to the cognitive and behavioral process of coping with and communicating about a profound experience through artistic visual translation.

USDA Organic seal of approval - my doctor recommends that I eat as much organic food as possible. Organics do not contain antibiotics, pesticides, herbicides or growth hormones (all which will interfere with treatment).

One monthâ&amp;#x20AC;&amp;#x2122;s worth of antibiotics, supplements and vitamins.

Close up of weekly pills.

Wild caught salmon - farm raised fish is treated with antibiotics which will interfere with the antibiotics I take.

I have been advised by my doctor to avoid all products containing GMOâ&amp;#x20AC;&amp;#x2122;s (genetically modified organisms). This is very difficult because the USDA does not require labeling of GMO products. If something is not labeled as GMO free I usually donâ&amp;#x20AC;&amp;#x2122;t buy it. More than 50 other countries in the world require GMO labeling in the food industry. The US does not. Legislation in California called Prop 37 may be the first in the US to require GMO labeling if it passes.

A giant stop sign was really the first image that popped into my head when you told me about this project. Since I started at Wilkes in 2009 I have been constantly running a hectic schedule.Working full time and taking 9-10 credits every semester (including summer sessions), I didnâ&amp;#x20AC;&amp;#x2122;t really get much of a break. I was used to the pace though and to have everything in my life come to a screeching halt was unnerving. I am very stubborn when I want to do something so to have my body all of a sudden impose limitations on my plans was very frustrating. Since I was 19 years old I have been living on my own, working and supporting myself. So it was almost surreal how in February I was independent, getting good grades and working - going 7 days a week and then in March everything stopped completely. To be 37 and dependent on my parents again was a nightmare.

Needles... ugh I was stuck so many times I felt like a guinea pig for 2 months. I went to 5-6 doctors before I was diagnosed correctly and they tested me for everything under the sun: lupus,ALS, MS, rheumatoid arthritis, osteoarthritis, carpal tunnel syndrome... the more tests they did the more afraid I was of the results. I was tested twice for Lyme and came up negative (false negatives) and then finally saw a neurologist who diagnosed me correctly and started the Lyme treatment. Basically from March 2012 through May 2012 I was a living pin cushion.

I wrapped both of my wrists with ace bandages to keep my wrists immobilized. It seemed to help the pain factor. When ever I moved my wrists I would feel shooting nerve pain up my arm and into my hands so ace bandages and wrist splints helped to minimize the pain somewhat.

Losing the use of my hands was the most frustrating situation. I was not able to do simple household chores like laundry or dishes but I was also unable to hold a pencil or work on my computer. For a few months I really thought my career as an artist was over. After working so hard for 3 years to finish my degree (and spending so much money!!) I felt like I hit a wall and my hands were literally tied.

Iâ&amp;#x20AC;&amp;#x2122;m not sure why but this photo really reminds me of what I felt like before I started feeling better. I suppose I felt immobilized - not just physically but mentally as well. I had such high hopes of starting my life over with a great career and losing that hope kind of froze me. So physically I lost a great deal of mobility with Lyme disease, mentally I was also stuck in place.

The photos in this journal were taken by the

In reflection of the Experience of this data

collection. In the expanded version of this pilot

college senior. She was studying in a media

study it will be suggested that participants use

design program at a small, private university in

their own equipment, if they have it. This will

North Eastern Pennsylvania at the time of this

ensure an immediate level of comfort in the

study. Five of the photos were taken with the

creative process. In addition, they will be direced

to shoot photos in their own environment.

of the photos were taken with the participantâ&amp;#x20AC;&amp;#x2122;s

Finally, the file design for the compilation, will

be predetermined possibly using this design if it

entries were written by the participant as is.

proves to suit the study needs. Extra, time was spent on design revisions of this document

The design and layout of this book were created

layout, which threw changed the predicted

by the researcher, Sara Pisarchick in Fall 2012,

while she studied qualitative research design II at Wilkes University. The purpose is to feature the photography and journal entries of the study participant. The name of the participant will not be disclosed in order to protect her identity.

Disability in a World of Creativity : A Visual Translation

This is a photo journal created by a college student with lyme disease. The photos represent her experience. The study was conducted by Professor Sara Pisarchick at Wilkes University in Pennsylvania. 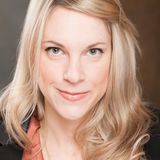