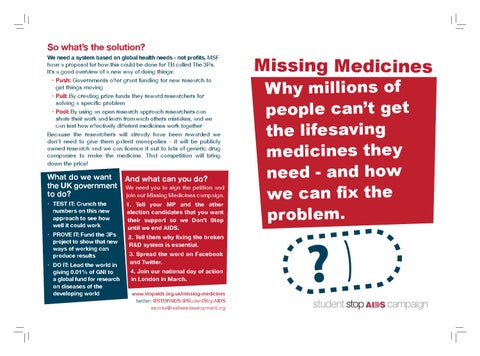 So what’s the solution?

We need a system based on global health needs - not profits. MSF have a proposal for how this could be done for TB called The 3Ps. It’s a good overview of a new way of doing things: • Push: Governments offer grant funding for new research to get things moving • Pull: By creating prize funds they reward researchers for solving a specific problem

• Pool: By using an open research approach researchers can share their work and learn from each others mistakes, and we can test how effectively different medicines work together Because the researchers will already have been rewarded we don’t need to give them patent monopolies - it will be publicly owned research and we can licence it out to lots of generic drug companies to make the medicine. That competition will bring down the price!

What do we want And what can you do? the UK government We need you to sign the petition and to do? join our Missing Medicines campaign. • TEST IT: Crunch the numbers on this new approach to see how well it could work

• PROVE IT: Fund the 3Ps project to show that new ways of working can produce results • DO IT: Lead the world in giving 0.01% of GNI to a global fund for research on diseases of the developing world

1. Tell your MP and the other election candidates that you want their support so we Don’t Stop until we end AIDS. 2. Tell them why fixing the broken R&D system is essential. 3. Spread the word on Facebook and Twitter. 4. Join our national day of action in London in March.

Missing Medicines W hy millions of people can’t get the lifesaving medicines they need - and how we can fix the problem.

We could end AIDS and tuberculosis, the biggest killer of people living with HIV, by 2030 but we are missing some essential tools. Here’s why. Right now the system we have created to encourage the development of new medicines is based on profits. If a drug company develops a new medicine then they get given a patent- a guaranteed monopoly for 20 years when no one else can make or sell that drug. But this leads to lots of problems:

This leads to lots of messed up stuff…

In the last 50 years we’ve had 14 new treatments for hayfever but only one for tuberculosis. TB kills 1.5 million people a year. Hayfever kills none.

These problems are hardly surprising when this is the attitude of big pharma:

• Diseases affecting the developing world get ignored - big pharma like to make big profits, so they spend their time and money developing medicines that they can sell for as much as possible in the US and Europe. Even though they kill millions of people, diseases like TB just don’t get a look in.

• Medicines are priced out of reach of poor people - when useful drugs are developed the patent monopoly means companies can charge whatever they like. And usually that means a price much higher than people and governments in the developing world can afford. • We waste precious research money - this whole system means companies don’t share information, more research goes on safe bets- copying existing drugs rather than solving unsolved problems, and public investment in research gets forgotten when companies take it over. It is really inefficient!

Over 90% of children living with HIV live in Africa. Poor African children are not a very profitable market so we have a shortage of child-friendly HIV treatment. Without treatment half will die by before their second birthday. We have a great new lifesaving hepatitis C drug called sofosbuvir. The drug company, Gilead, have used their monopoly to price it so high only 1% of the people in the world who need it can afford it. Gilead meanwhile have made more money from sofosbuvir than any drug in history! The drugs you need to take if you have drug resistant TB are horrible. You have to take them for months- in some cases over two years- and you have to go to a clinic to be injected every day. They have terrible side effects including nausea and permanent deafness. Even then, for extremely drug resistant TB the drugs still don’t work and around 87% still die.

Every year millions of people are affected by neglected diseases-and these diseases are neglected because of this profit driven model.

We believe this is an outrage, an injustice, but most importantly that it can be fixed. 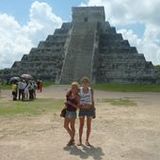