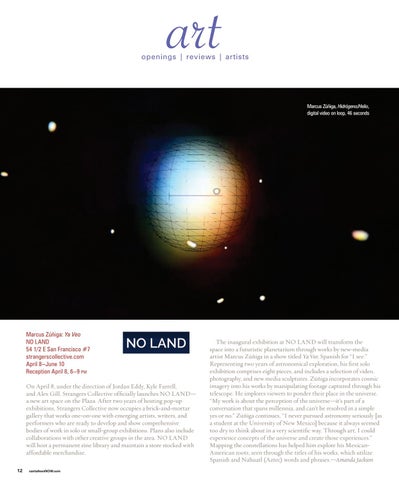 Marcus Zúñiga: Ya Veo NO LAND 54 1/2 E San Francisco #7 strangerscollective.com April 8–June 10 Reception April 8, 6–9 pm On April 8, under the direction of Jordan Eddy, Kyle Farrell, and Alex Gill, Strangers Collective officially launches NO LAND— a new art space on the Plaza. After two years of hosting pop-up exhibitions, Strangers Collective now occupies a brick-and-mortar gallery that works one-on-one with emerging artists, writers, and performers who are ready to develop and show comprehensive bodies of work in solo or small-group exhibitions. Plans also include collaborations with other creative groups in the area. NO LAND will host a permanent zine library and maintain a store stocked with affordable merchandise. 12

The inaugural exhibition at NO LAND will transform the space into a futuristic planetarium through works by new-media artist Marcus Zúñiga in a show titled Ya Veo; Spanish for “I see.” Representing two years of astronomical exploration, his first solo exhibition comprises eight pieces, and includes a selection of video, photography, and new media sculptures. Zúñiga incorporates cosmic imagery into his works by manipulating footage captured through his telescope. He implores viewers to ponder their place in the universe. “My work is about the perception of the universe—it’s part of a conversation that spans millennia, and can’t be resolved in a simple yes or no.” Zúñiga continues, “I never pursued astronomy seriously [as a student at the University of New Mexico] because it always seemed too dry to think about in a very scientific way. Through art, I could experience concepts of the universe and create those experiences.” Mapping the constellations has helped him explore his MexicanAmerican roots, seen through the titles of his works, which utilize Spanish and Nahuatl (Aztec) words and phrases.—Amanda Jackson