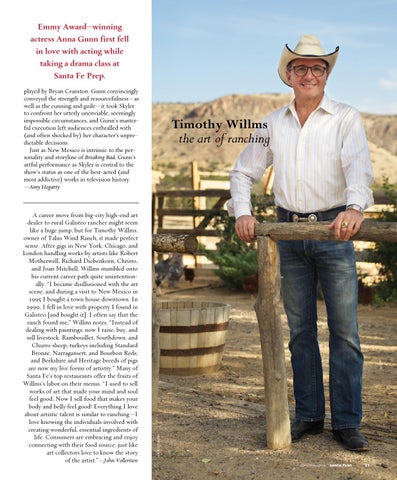 Emmy Award–winning actress Anna Gunn first fell in love with acting while taking a drama class at Santa Fe Prep. played by Bryan Cranston. Gunn convincingly conveyed the strength and resourcefulness—as well as the cunning and guile—it took Skyler to confront her utterly unenviable, seemingly impossible circumstances, and Gunn’s masterful execution left audiences enthralled with (and often shocked by) her character’s unpredictable decisions. Just as New Mexico is intrinsic to the personality and storyline of Breaking Bad, Gunn’s artful performance as Skyler is central to the show’s status as one of the best-acted (and most addictive) works in television history. —Amy Hegarty

the art of ranching

A career move from big-city high-end art dealer to rural Galisteo rancher might seem like a huge jump, but for Timothy Willms, owner of Talus Wind Ranch, it made perfect sense. After gigs in New York, Chicago, and London handling works by artists like Robert Motherwell, Richard Diebenkorn, Christo, and Joan Mitchell, Willms stumbled onto his current career path quite unintentionally. “I became disillusioned with the art scene, and during a visit to New Mexico in 1995 I bought a town house downtown. In 1999, I fell in love with property I found in Galisteo [and bought it]. I often say that the ranch found me,” Willms notes. “Instead of dealing with paintings, now I raise, buy, and sell livestock. Rambouillet, Southdown, and Churro sheep; turkeys including Standard Bronze, Narragansett, and Bourbon Reds; and Berkshire and Heritage breeds of pigs are now my live forms of artistry.” Many of Santa Fe’s top restaurants offer the fruits of Willms’s labor on their menus. “I used to sell works of art that made your mind and soul feel good. Now I sell food that makes your body and belly feel good! Everything I love about artistic talent is similar to ranching—I love knowing the individuals involved with creating wonderful, essential ingredients of life. Consumers are embracing and enjoy connecting with their food source, just like art collectors love to know the story of the artist.”—John Vollertsen