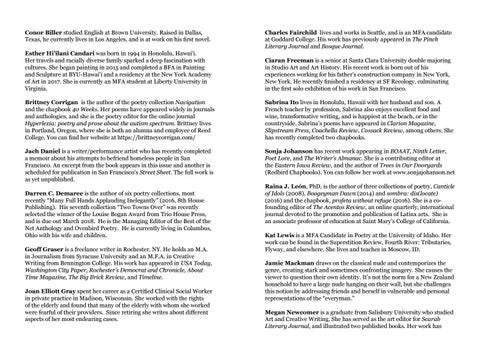 Conor Biller studied English at Brown University. Raised in Dallas, Texas, he currently lives in Los Angeles, and is at work on his first novel. Esther Hi’ilani Candari was born in 1994 in Honolulu, Hawai’i. Her travels and racially diverse family sparked a deep fascination with cultures. She began painting in 2015 and completed a BFA in Painting and Sculpture at BYU-Hawai’i and a residency at the New York Academy of Art in 2017. She is currently an MFA student at Liberty University in Virginia.

Charles Fairchild lives and works in Seattle, and is an MFA candidate at Goddard College. His work has previously appeared in The Pinch Literary Journal and Bosque Journal. Ciaran Freeman is a senior at Santa Clara University double majoring in Studio Art and Art History. His recent work is born out of his experiences working for his father’s construction company in New York, New York. He recently finished a residency at SF Recology, culminating in the first solo exhibition of his work in San Francisco.

Brittney Corrigan is the author of the poetry collection Navigation and the chapbook 40 Weeks. Her poems have appeared widely in journals and anthologies, and she is the poetry editor for the online journal Hyperlexia: poetry and prose about the autism spectrum. Brittney lives in Portland, Oregon, where she is both an alumna and employee of Reed College. You can find her website at https://brittneycorrigan.com/

Sabrina Ito lives in Honolulu, Hawaii with her husband and son. A French teacher by profession, Sabrina also enjoys excellent food and wine, transformative writing, and is happiest at the beach, or in the countryside. Sabrina’s poems have appeared in Clarion Magazine, Slipstream Press, Coachella Review, Cossack Review, among others. She has recently completed two chapbooks.

Jach Daniel is a writer/performance artist who has recently completed a memoir about his attempts to befriend homeless people in San Francisco. An excerpt from the book appears in this issue and another is scheduled for publication in San Francisco’s Street Sheet. The full work is as yet unpublished.

Sonja Johanson has recent work appearing in BOAAT, Ninth Letter, Poet Lore, and The Writer’s Almanac. She is a contributing editor at the Eastern Iowa Review, and the author of Trees in Our Dooryards (Redbird Chapbooks). You can follow her work at www.sonjajohanson.net

Darren C. Demaree is the author of six poetry collections, most recently “Many Full Hands Applauding Inelegantly” (2016, 8th House Publishing). His seventh collection “Two Towns Over” was recently selected the winner of the Louise Bogan Award from Trio House Press, and is due out March 2018. He is the Managing Editor of the Best of the Net Anthology and Ovenbird Poetry. He is currently living in Columbus, Ohio with his wife and children. Geoff Graser is a freelance writer in Rochester, NY. He holds an M.A. in Journalism from Syracuse University and an M.F.A. in Creative Writing from Bennington College. His work has appeared in USA Today, Washington City Paper, Rochester’s Democrat and Chronicle, About Time Magazine, The Big Brick Review, and Timeline. Joan Elliott Gray spent her career as a Certified Clinical Social Worker in private practice in Madison, Wisconsin. She worked with the rights of the elderly and found that many of the elderly with whom she worked were fearful of their providers. Since retiring she writes about different aspects of her most endearing cases.

Raina J. León, PhD, is the author of three collections of poetry, Canticle of Idols (2008), Boogeyman Dawn (2014) and sombra: dis(locate) (2016) and the chapbook, profeta without refuge (2016). She is a cofounding editor of The Acentos Review, an online quarterly, international journal devoted to the promotion and publication of Latinx arts. She is an associate professor of education at Saint Mary’s College of California. Kat Lewis is a MFA Candidate in Poetry at the University of Idaho. Her work can be found in the Superstition Review, Fourth River: Tributaries, Flyway, and elsewhere. She lives and teaches in Moscow, ID. Jamie Mackman draws on the classical nude and contemporizes the genre, creating stark and sometimes confronting imagery. She causes the viewer to question their own identity. It’s not the norm for a New Zealand household to have a large nude hanging on their wall, but she challenges this notion by addressing friends and herself in vulnerable and personal representations of the “everyman.” Megan Newcomer is a graduate from Salisbury University who studied Art and Creative Writing. She has served as the art editor for Scarab Literary Journal, and illustrated two published books. Her work has 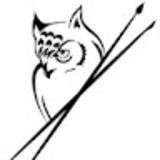