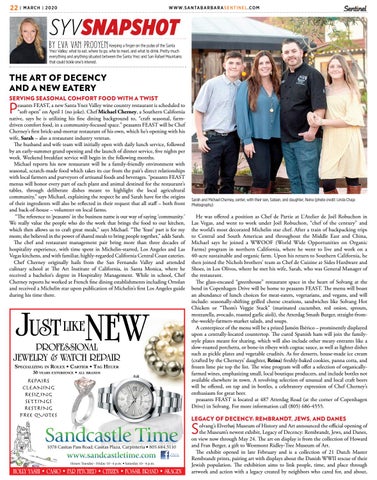 by Eva Van Prooyen Keeping a finger on the pulse of the Santa Ynez Valley: what to eat, where to go, who to meet, and what to drink. Pretty much everything and anything situated between the Santa Ynez and San Rafael Mountains that could tickle one’s interest.

THE ART OF DECENCY AND A NEW EATERY

SERVING SEASONAL COMFORT FOOD WITH A TWIST easants FEAST, a new Santa Ynez Valley wine country restaurant is scheduled to “soft open” on April 1 (no joke). Chef Michael Cherney, a Southern California native, says he is utilizing his fine dining background to, “craft seasonal, farmdriven comfort food, in a community-focused space.” peasants FEAST will be Chef Cherney’s first brick-and-mortar restaurant of his own, which he’s opening with his wife, Sarah – also a restaurant industry veteran. The husband and wife team will initially open with daily lunch service, followed by an early-summer grand opening and the launch of dinner service, five nights per week. Weekend breakfast service will begin in the following months. Michael reports his new restaurant will be a family-friendly environment with seasonal, scratch-made food which takes its cue from the pair’s direct relationships with local farmers and purveyors of artisanal foods and beverages. “peasants FEAST menus will honor every part of each plant and animal destined for the restaurant’s tables, through deliberate dishes meant to highlight the local agricultural community,” says Michael, explaining the respect he and Sarah have for the origins of their ingredients will also be reflected in their request that all staff – both front and back-of-house – volunteer on local farms. “The reference to ‘peasants’ in the business name is our way of saying ‘community.’ We really value the people who do the work that brings the food to our kitchen, which then allows us to craft great meals,” says Michael. “The ‘feast’ part is for my mom; she believed in the power of shared meals to bring people together,” adds Sarah. The chef and restaurant management pair bring more than three decades of hospitality experience, with time spent in Michelin-starred, Los Angeles and Las Vegas kitchens, and with familiar, highly-regarded California Central Coast eateries. Chef Cherney originally hails from the San Fernando Valley and attended culinary school at The Art Institute of California, in Santa Monica, where he received a bachelor’s degree in Hospitality Management. While in school, Chef Cherney reports he worked at French fine dining establishments including Ortolan and received a Michelin star upon publication of Michelin’s first Los Angeles guide during his time there.

He was offered a position as Chef de Partie at L’Atelier de Joël Robuchon in Las Vegas, and went to work under Joël Robuchon, “chef of the century” and the world’s most decorated Michelin star chef. After a train of backpacking trips to Central and South Americas and throughout the Middle East and China, Michael says he joined a WWOOF (World Wide Opportunities on Organic Farms) program in northern California, where he went to live and work on a 40-acre sustainable and organic farm. Upon his return to Southern California, he then joined the Nichols brothers’ team as Chef de Cuisine at Sides Hardware and Shoes, in Los Olivos, where he met his wife, Sarah, who was General Manager of the restaurant. The glass-encased “greenhouse” restaurant space in the heart of Solvang at the bend in Copenhagen Drive will be home to peasants FEAST. The menu will boast an abundance of lunch choices for meat-eaters, vegetarians, and vegans, and will include: seasonally-shifting grilled cheese creations, sandwiches like Solvang Hot Chicken or “Thom’s Veggie Stack” (marinated cucumber, red onion, sprouts, mozzarella, avocado, roasted garlic aioli), the Atterdag Smash Burger, straight-fromthe-weekly-farmers-market salads, and soups. A centerpiece of the menu will be a prized Jamón Ibérico – prominently displayed upon a centrally-located countertop. The cured Spanish ham will join the familystyle plates meant for sharing, which will also include other meaty entrants like a slow-roasted porchetta, or bone-in ribeye with cognac sauce, as well as lighter dishes such as pickle plates and vegetable crudités. As for desserts, house-made ice cream (crafted by the Cherneys’ daughter, Reina) freshly-baked cookies, panna cotta, and frozen lime pie top the list. The wine program will offer a selection of organicallyfarmed wines, emphasizing small, local boutique producers, and include bottles not available elsewhere in town. A revolving selection of unusual and local craft beers will be offered, on tap and in bottles, a celebratory expression of Chef Cherney’s enthusiasm for great beer. peasants FEAST is located at 487 Atterdag Road (at the corner of Copenhagen Drive) in Solvang. For more information call (805) 686-4555. LEGACY OF DECENCY: REMBRANDT, JEWS, AND DANES olvang’s Elverhøj Museum of History and Art announced the official opening of the Museum’s newest exhibit, Legacy of Decency: Rembrandt, Jews, and Danes, on view now through May 24. The art on display is from the collection of Howard and Fran Berger, a gift to Westmont Ridley-Tree Museum of Art. The exhibit opened in late February and is a collection of 21 Dutch Master Rembrandt prints, pairing art with displays about the Danish WWII rescue of their Jewish population. The exhibition aims to link people, time, and place through artwork and action with a legacy created by neighbors who cared for, and about,