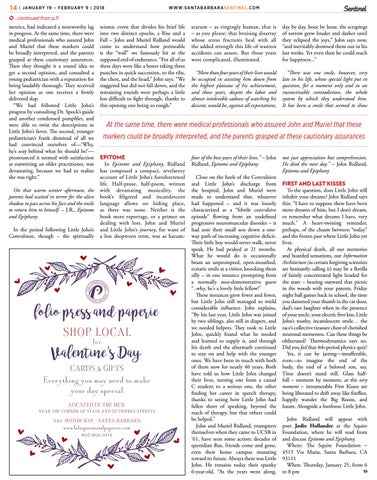 metrics, had indicated a noteworthy lag in progress. At the same time, there were medical professionals who assured John and Muriel that these markers could be broadly interpreted, and the parents grasped at these cautionary assurances. Then they thought it a sound idea to get a second opinion, and consulted a young pediatrician with a reputation for being laudably thorough. They received her opinion as one receives a firmly delivered slap. “We had followed Little John’s progress by consulting Dr. Spock’s guide and another condensed pamphlet, and were able to twist the descriptions in Little John’s favor. The second, younger pediatrician’s frank dismissal of all we had convinced ourselves of––‘Why, he’s way behind what he should be!’–– pronounced it seemed with satisfaction at outwitting an older practitioner, was devastating, because we had to realize she was right.” On that warm winter afternoon, the parents had waited in terror for the alien shadow to pass across his face and the smile to return him to himself. – J.R., Epitome and Epiphany In the period following Little John’s Convulsion, though – the spiritually

seismic event that divides his brief life into two distinct epochs, a Rise and a Fall – John and Muriel Ridland would come to understand how permeable is the “wall” we famously hit at the supposed end of endurance. “For all of us these days were like a boxer taking three punches in quick succession, to the ribs, the chest, and the head,” John says. “We staggered but did not fall down, and the remaining rounds were perhaps a little less difficult to fight through, thanks to this opening one being so rough.”

day by day, hour by hour, the scrapings of sorrow grew louder and darker until they eclipsed the joys,” John says now, “and inevitably drowned them out in his last weeks. Yet even then he could reach for happiness...”

“More than four years of their lives would be occupied in assisting him down from the highest plateaus of his achievement, and those years, despite the labor and almost intolerable sadness of watching his descent, would be, against all expectations,

“There was one smile, however, very late in his life, whose special light put in question, for a moment only and in an inconceivable contradiction, the whole system by which they understood him. It has been a smile that seemed to show

At the same time, there were medical professionals who assured John and Muriel that these markers could be broadly interpreted, and the parents grasped at these cautionary assurances EPITOME In Epitome and Epiphany, Ridland has composed a compact, revelatory account of Little John’s foreshortened life. Half-prose, half-poem, written with devastating musicality, the book’s filigreed and incandescent language allows no hiding place, as there was none. Neither is the book mere reportage, or a primer on dealing with loss. John and Muriel and Little John’s journey, for want of a less shopworn term, was as harum-

scarum – as ringingly human, that is – as you please; that bruising disarray whose stress fractures heal with all the added strength this life of wanton accidents can assure. But those years were complicated, illuminated.

four of the best years of their lives.” – John Ridland, Epitome and Epiphany Close on the heels of the Convulsion and Little John’s discharge from the hospital, John and Muriel were made to understand that, whatever had happened – and it was loosely characterized as a “febrile convulsive episode” flowing from an undefined progressive neuromuscular disorder – it had sent their small son down a oneway path of increasing cognitive deficit. Their little boy would never walk, never speak. He had peaked at 21 months. What he would do is occasionally beam an unprompted, open-mouthed, ecstatic smile at a visitor, knocking them silly – in one instance prompting from a normally non-demonstrative guest “..why, he’s a lovely little fellow!” These instances grew fewer and fewer, but Little John still managed to wield considerable influence. John explains, “By his last year, Little John was joined by two siblings, also still in diapers, and we needed helpers. They took to Little John, quickly found what he needed and learned to supply it, and through his death and the aftermath continued to stay on and help with the younger ones. We have been in touch with both of them now for nearly 40 years. Both have told us how Little John changed their lives, turning one from a casual C student to a serious one, the other finding her career in speech therapy, thanks to seeing how Little John had fallen short of speaking, beyond the reach of therapy, but that others could be helped.” John and Muriel Ridland, youngsters themselves when they came to UCSB in ’61, have seen some action; decades of quotidian flux, friends come and gone, even their home campus mutating toward its future. Always there was Little John. He remains today their spunky 6-year-old. “As the years went along,

not just appreciation but comprehension. He died the next day.” – John Ridland, Epitome and Epiphany FIRST AND LAST KISSES To the question, does Little John still inhabit your dreams? John Ridland says this: “I have to suppose there have been more dreams of him, but I don’t dream, or remember what dreams I have, very much.” A heart-twisting reminder, perhaps, of the chasm between “today” and the frozen past where Little John yet lives. At physical death, all our memories and hoarded sensations, our Information Architecture (as certain forgiving scientists are hesitantly calling it) may be a flotilla of faintly concentrated light headed for the stars – bearing outward that picnic in the woods with your parents, Friday night ball games back in school, the time you slammed your thumb in the car door, dad’s rare laughter when in the presence of your uncle, your electric first kiss, Little John’s toothy, incandescent smile… the race’s collective treasure chest of cherished neuronal mementos. Can these things be obliterated? Thermodynamics says no. Did you fail that 4th-period physics quiz? Yes, it can be jarring—insufferable, even—to imagine the end of the body, the end of a beloved son, say. Time doesn’t stand still. Glass halffull – moment by moment, at this very moment – innumerable First Kisses are being liberated to drift away like fireflies, happily wander the Big Room, and haunt. Alongside a footloose Little John. John Ridland will appear with poet Jodie Hollander at the Squire Foundation, where he will read from and discuss Epitome and Epiphany. Where: The Squire Foundation – 4515 Via Maria, Santa Barbara, CA 93111 When: Thursday, January 25, from 6 to 8 pm 