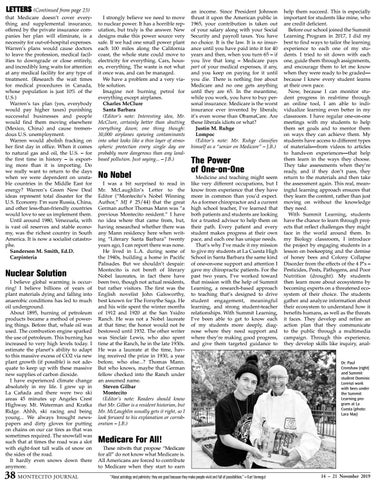 that Medicare doesn’t cover everything and supplemental insurance, offered by the private insurance companies her plan will eliminate, is a necessity for out-of-hospital expenses. Warren’s plans would cause doctors to leave the profession, medical facilities to downgrade or close entirely, and incredibly long waits for attention at any medical facility for any type of treatment. (Research the wait times for medical procedures in Canada, whose population is just 10% of the U.S.) Warren’s tax plan (yes, everybody would pay higher taxes) punishing successful businesses and people would find them moving elsewhere (Mexico, China) and cause tremendous U.S. unemployment. Warren would abolish fracking on her first day in office. When it comes to natural gas and oil, the U.S. – for the first time in history – is exporting more than it is importing. Do we really want to return to the days when we were dependent on unstable countries in the Middle East for energy? Warren’s Green New Deal ideas represent total disaster for the U.S. Economy. I’m sure Russia, China, and other less-than-friendly countries would love to see us implement them. Until around 1980, Venezuela, with is vast oil reserves and stable economy, was the richest country in South America. It is now a socialist catastrophe. Sanderson M. Smith, Ed.D. Carpinteria

I believe global warming is occurring! I believe billions of years of plant materials dying and falling into anaerobic conditions has led to much oil underground. About 1895, burning of petroleum products became a method of powering things. Before that, whale oil was used. The combustion engine sparked the use of petroleum. This burning has increased to very high levels today. I estimate the planet’s ability to adapt to this massive excess of CO2 via new plant growth (if possible) is not adequate to keep up with these massive new supplies of carbon dioxide. I have experienced climate change absolutely in my life. I grew up in La Cañada and there were two ski areas 45 minutes up Angeles Crest Highway. Mt. Waterman and Kratka Ridge. Ahhh, ski racing and being young... We always brought newspapers and dirty gloves for putting on chains on our car tires as that was sometimes required. The snowfall was such that at times the road was a slot with eight-foot tall walls of snow on the sides of the road. It hardly even snows down there anymore.

I strongly believe we need to move to nuclear power. It has a horrible reputation, but truly is the answer. New designs make this power source very safe. If we had one small power plant each 100 miles along the California coast, the whole state could move to electricity for everything. Cars, houses, everything. The waste is not what it once was, and can be managed. We have a problem and a very viable solution. Imagine not burning petrol for everything except airplanes. Charles McClure Santa Barbara (Editor’s note: Interesting idea, Mr. McClure, certainly better than shutting everything down; one thing though: 30,000 airplanes spewing contaminants into what looks like a thin layer of atmospheric protection every single day are probably more dangerous than any landbased pollution. Just saying... – J.B.)

I was a bit surprised to read in Mr. McLaughlin’s Letter to the Editor (“Montecito’s Nobel Winning Author,” MJ # 25/44) that the great German author Thomas Mann was “a previous Montecito resident.” I have no idea where that came from, but, having researched whether there was any Mann residency here when writing “Literary Santa Barbara” twenty years ago, I can report there was none. He lived in L.A. during some of the 1940s, building a home in Pacific Palisades. But we shouldn’t despair: Montecito is not bereft of literary Nobel laureates, in fact there have been two, though not actual residents, but rather visitors. The first was the English novelist John Galsworthy, best known for The Forsythe Saga. He and his wife spent the winter months of 1912 and 1920 at the San Ysidro Ranch. He was not a Nobel laureate at that time; the honor would not be bestowed until 1932. The other writer was Sinclair Lewis, who also spent time at the Ranch, he in the late 1930s. He was a laureate at the time, having received the prize in 1930, a year before, who else...? Thomas Mann. But who knows, maybe that German fellow checked into the Ranch under an assumed name. Steven Gilbar Montecito (Editor’s note: Readers should know that Mr. Gilbar is a resident historian, but Mr. McLaughlin usually gets it right, so I look forward to his explanation or corroboration – J.B.)

an income. Since President Johnson thrust it upon the American public in 1965, your contribution is taken out of your salary along with your Social Security and payroll taxes. You have no choice. It is the law. It is no insurance until you have paid into it for 40 years and then, when you turn 65 – if you live that long – Medicare pays part of your medical expenses, if any, and you keep on paying for it until you die. There is nothing free about Medicare and no one gets anything until they are 65. In the meantime, while you work, you have to buy personal insurance. Medicare is the worst insurance ever invented by liberals; it’s even worse than ObamaCare. Are these liberals idiots or what? Justin M. Ruhge Lompoc (Editor’s note: Mr. Ruhge classifies himself as a “senior on Medicare” – J.B.)

The Power of One-on-One

Medicine and teaching might seem like very different occupations, but I know from experience that they have more in common than you’d expect. As a former chiropractor and a current high school teacher, I’ve learned that both patients and students are looking for a trusted advisor to help them on their path. Every patient and every student makes progress at their own pace, and each one has unique needs. That’s why I’ve made it my mission to give my students at La Cuesta High School in Santa Barbara the same kind of one-on-one support and attention I gave my chiropractic patients. For the past two years, I’ve worked toward that mission with the help of Summit Learning, a research-based approach to teaching that’s designed to drive student engagement, meaningful learning, and strong student-teacher relationships. With Summit Learning, I’ve been able to get to know each of my students more deeply, diagnose where they need support and where they’re making good progress, and give them targeted guidance to

help them succeed. This is especially important for students like mine, who are credit deficient. Before our school joined the Summit Learning Program in 2017, I did my best to find ways to tailor the learning experience to each one of my students. I tried to sit down with each one, guide them through assignments, and encourage them to let me know when they were ready to be graded— because I knew every student learns at their own pace. Now, because I can monitor student progress in real-time through an online tool, I am able to individualize learning even better in my classroom. I have regular one-on-one meetings with my students to help them set goals and to mentor them on ways they can achieve them. My students have access to different types of materials—from videos to articles to hands-on experiences—that help them learn in the ways they choose. They take assessments when they’re ready, and if they don’t pass, they return to the materials and then take the assessment again. This real, meaningful learning approach ensures that they learn the content, rather than just moving on without the knowledge they need. With Summit Learning, students have the chance to learn through projects that reflect challenges they might face in the world around them. In my Biology classroom, I introduce the project by engaging students in a lesson on beekeeping and the demise of honey bees and Colony Collapse Disorder from the effects of the 4 P’s – Pesticides, Pests, Pathogens, and Poor Nutrition (drought). My students then learn more about ecosystems by becoming experts on a threatened ecosystem of their choice. The students gather and analyze information about their ecosystem to understand how it benefits humans, as well as the threats it faces. They develop and refine an action plan that they communicate to the public through a multimedia campaign. Through this experience, they develop skills like inquiry, anal-

These nitwits that propose “Medicare for all” do not know what Medicare is. All Americans are forced to contribute to Medicare when they start to earn “About astrology and palmistry: they are good because they make people vivid and full of possibilities.” – Kurt Vonnegut