The Forgotten Story Of The West Beach Bandshell 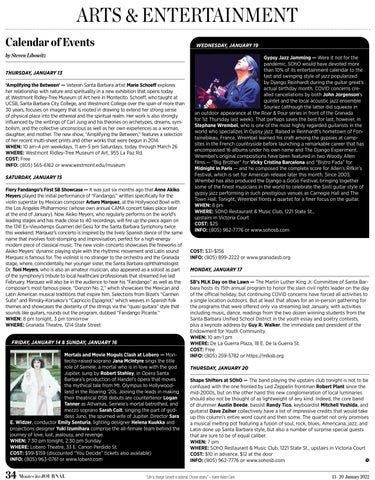 by Steven Libowitz THURSDAY, JANUARY 13 ‘Amplifying the Between’ — Veteran Santa Barbara artist Marie Schoeff explores her relationship with nature and spirituality in a new exhibition that opens today at Westmont Ridley-Tree Museum of Art here in Montecito. Schoeff, who taught at UCSB, Santa Barbara City College, and Westmont College over the span of more than 30 years, focuses on imagery that is rooted in drawing to extend her strong sense of physical place into the ethereal and the spiritual realm. Her work is also strongly influenced by the writings of Carl Jung and his theories on archetypes, dreams, symbolism, and the collective unconscious as well as her own experiences as a woman, daughter, and mother. The new show, “Amplifying the Between,” features a selection of her recent multi-sheet prints and other works that were begun in 2014. WHEN: 10 am-4 pm weekdays, 11 am-5 pm Saturdays, today through March 26 WHERE: Westmont Ridley-Tree Museum of Art, 955 La Paz Rd. COST: Free INFO: (805) 565-6162 or www.westmont.edu/museum SATURDAY, JANUARY 15 Fiery Fandango’s First SB Showcase — It was just six months ago that Anne Akiko Meyers played the initial performance of “Fandango,” written specifically for the violin superstar by Mexican composer Arturo Marquez, at the Hollywood Bowl with the Los Angeles Philharmonic (whose own annual CAMA concert takes place later at the end of January). Now Akiko Meyers, who regularly performs on the world’s leading stages and has made close to 40 recordings, will fire up the piece again on the 1741 Ex-Vieuxtemps Guarneri del Gesù for the Santa Barbara Symphony twice this weekend. Márquez’s concerto is inspired by the lively Spanish dance of the same name that involves foot-stomping and improvisation, perfect for a high-energy modern piece of classical music. The new violin concerto showcases the fireworks of Akiko Meyers’ dynamic playing style with the rhythmic movement and Latin sound Marquez is famous for. The violinist is no stranger to the orchestra and the Granada stage, where, coincidentally, her younger sister, the Santa Barbara ophthalmologist Dr. Toni Meyers, who is also an amateur musician, also appeared as a soloist as part of the symphony’s tribute to local healthcare professionals that streamed live last February. Marquez will also be in the audience to hear his “Fandango” as well as the composer’s most famous piece, “Danzon No. 2,” which showcases the Mexican and Latin American musical traditions that inspire him. Selections from Bizet’s “Carmen Suite” and Rimsky-Korsakov’s “Capriccio Espagnol,” which weaves in Spanish folk themes and showcases the dexterity of the strings via the “quasi guitara” style that sounds like guitars, rounds out the program, dubbed “Fandango Picante.” WHEN: 8 pm tonight, 3 pm tomorrow WHERE: Granada Theatre, 1214 State Street FRIDAY, JANUARY 14 &amp; SUNDAY, JANUARY 16 Mortals and Movie Moguls Clash at Lobero — Montecito-raised soprano Jana McIntyre sings the title role of Semele, a mortal who is in love with the god Jupiter, sung by Robert Stahley, in Opera Santa Barbara’s production of Handel’s opera that moves the mythical tale from Mt. Olympus to Hollywoodland in the Roaring ’20s. Joining the leads in making their theatrical OSB debuts are countertenor Logan Tanner as Athamas, Semele’s mortal betrothed, and mezzo soprano Sarah Coit, singing the part of goddess Juno, the spurned wife of Jupiter. Director Sara E. Widzer, conductor Emily Senturia, lighting designer Helena Kuukka and projections designer Yuki Izumihara comprise the all-female team behind the journey of love, lust, jealousy, and revenge. WHEN: 7:30 pm tonight, 2:30 pm Sunday WHERE: Lobero Theatre, 33 E. Canon Perdido St. COST: $99-$159 (discounted “You Decide” tickets also available) INFO: (805) 963-0761 or www.lobero.com

Gypsy Jazz Jamming — Were it not for the pandemic, SOhO would have devoted more than 10% of its entertainment calendar to the fast and swinging style of jazz popularized by Django Reinhardt during the guitar great’s actual birthday month. COVID concerns created cancellations by both John Jorgenson’s quintet and the local acoustic jazz ensemble Souriez (although the latter did squeeze in an outdoor appearance at the Roar &amp; Pour series in front of the Granada for 1st Thursday last week). That perhaps saves the best for last, however, in Stephane Wrembel, who is one of the most highly regarded guitarists in the world who specializes in Gypsy jazz. Raised in Reinhardt’s hometown of Fontainebleau, France, Wrembel learned his craft among the gypsies at campsites in the French countryside before launching a remarkable career that has encompassed 16 albums under his own name and The Django Experiment. Wrembel’s original compositions have been featured in two Woody Allen films — “Big Brother” for Vicky Cristina Barcelona and “Bistro Fada” for Midnight in Paris — and he composed the complete score for Allen’s Rifkin’s Festival, which is set for American release later this month. Since 2003, Wrembel has also produced the Django a GoGo Festival, bringing together some of the finest musicians in the world to celebrate the Sinti guitar style of gypsy jazz performing in such prestigious venues as Carnegie Hall and The Town Hall. Tonight, Wrembel fronts a quartet for a finer focus on the guitar. WHEN: 8 pm WHERE: SOhO Restaurant &amp; Music Club, 1221 State St., upstairs in Victoria Court COST: $25 INFO: (805) 962-7776 or www.sohosb.com

COST: $31-$156 INFO: (805) 899-2222 or www.granadasb.org MONDAY, JANUARY 17 SB’s MLK Day on the Lawn — The Martin Luther King Jr. Committee of Santa Barbara hosts its 15th annual program to honor the slain civil rights leader on the day of the official holiday, but continuing COVID concerns have forced all activities to a single location outdoors. But at least that allows for an in-person gathering for the programs that were offered only via streaming last January, with activities including music, dance, readings from the two dozen winning students from the Santa Barbara Unified School District in the youth essay and poetry contests, plus a keynote address by Guy R. Walker, the immediate past president of the Endowment for Youth Community. WHEN: 10 am-1 pm WHERE: De La Guerra Plaza, 18 E. De la Guerra St. COST: Free INFO: (805) 259-5782 or https://mlksb.org THURSDAY, JANUARY 20 Shape Shifters at SOhO — The band playing the upstairs club tonight is not to be confused with the one fronted by Led Zeppelin frontman Robert Plant since the mid-2000s, but on the other hand this new conglomeration of local luminaries should also not be thought of as lightweight of any kind. Indeed, the core band of drummer Austin Beede, bassist Randy Tico, keyboardist Mitchell Yoshida, and guitarist Dave Zeiher collectively have a list of impressive credits that would take up this column’s entire word count and then some. The quartet not only promises a musical melting pot featuring a fusion of soul, rock, blues, Americana, jazz, and Latin done up Santa Barbara style, but also a number of surprise special guests that are sure to be of equal caliber. WHEN: 7 pm WHERE: SOhO Restaurant &amp; Music Club, 1221 State St., upstairs in Victoria Court COST: $10 in advance, $12 at the door INFO: (805) 962-7776 or www.sohosb.com

The Forgotten Story Of The West Beach Bandshell