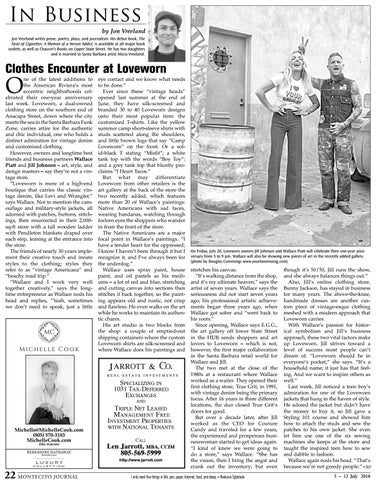 Jon Vreeland writes prose, poetry, plays, and journalism. His debut book, The Taste of Cigarettes: A Memoir of a Heroin Addict, is available at all major book outlets, as well as Chaucer’s Books on Upper State Street. He has two daughters and is married to Santa Barbara artist Alycia Vreeland.

ne of the latest additions to the American Riviera’s most eccentric neighborhoods celebrated their one-year anniversary last week. Loveworn, a dual-owned clothing store on the southern end of Anacapa Street, down where the city meets the sea in the Santa Barbara Funk Zone, carries attire for the authentic and chic individual, one who holds a distinct admiration for vintage denim and customized clothing. However, owners and longtime best friends and business partners Wallace Piatt and Jill Johnson – art, style, and design masters – say they’re not a vintage store. “Loveworn is more of a high-end boutique that carries the classic vintage denim, like Levi and Wrangler,” says Wallace. Not to mention the camouflage and military-style jackets, all adorned with patches, buttons, stitchings, then resurrected in their 2,000sq-ft store with a tall wooden ladder with Pendleton blankets draped over each step, leaning at the entrance into the store. The friends of nearly 30 years implement their creative touch and innate styles to the clothing; styles they refer to as “vintage Americana” and “beachy road trip.” “Wallace and I work very well together creatively,” says the longtime entrepreneur as Wallace nods his head and replies, “Yeah, sometimes we don’t need to speak, just a little

eye contact and we know what needs to be done.” Ever since these “vintage heads” opened last summer at the end of June, they have silk-screened and branded 30 to 40 Loveworn designs onto their most popular item: the customized T-shirts. Like the yellow summer camp short-sleeve shirts with studs scattered along the shoulders, and little brown logs that say “Camp Loveworn” on the front. Or a solid-black T stating “Misfit”; a white tank top with the words “Boy Toy”; and a grey tank top that bluntly proclaims “I Heart Tacos.” But what may differentiate Loveworn from other retailers is the art gallery at the back of the store the two recently added, which features more than 20 of Wallace’s paintings: Native Americans with sad faces, wearing bandanas, watching through forlorn eyes the shoppers who wander in from the front of the store. The Native Americans are a major focal point in Wallace’s paintings. “I have a tender heart for the oppressed; I know I haven’t been through it but I recognize it, and I’ve always been for the underdog.” Wallace uses spray paint, house paint, and oil pastels as his mediums – a lot of red and blue, stretching and cutting canvas into sections then stitches it back together, so the painting appears old and rustic, not crisp and flawless. He even walks on the art while he works to maintain its authentic charm. His art studio is two blocks from the shop: a couple of emptied-out shipping containers where the custom Loveworn shirts are silk-screened and where Wallace does his paintings and

SPECIALIZING IN 1031 TAX-DEFERRED EXCHANGES AND

On Friday, July 20, Loveworn owners Jill Johnson and Wallace Piatt will celebrate their one-year anniversary from 5 to 9 pm. Wallace will also be showing new pieces of art in the recently added gallery. (photo by Douglas Cummings www.yourloveinsong.com)

stretches his canvas. “It’s walking distance from the shop, and it’s my ultimate heaven,” says the artist of seven years. Wallace says the seriousness did not start seven years ago; his professional artistic achievements began three years ago, when Wallace got sober and “went back to his roots.” Since opening, Wallace says E.G.G., the art gallery off lower State Street in the HUB sends shoppers and art lovers to Loveworn – which is not, however, the first major collaboration in the Santa Barbara retail world for Wallace and Jill. The two met at the close of the 1980s at a restaurant where Wallace worked as a waiter. They opened their first clothing store, True Grit, in 1991, with vintage denim being the primary focus. After 16 years in three different locations, the duo closed True Grit’s doors for good. But over a decade later, after Jill worked as the CEO for Couture Candy and traveled for a few years, the experienced and prosperous businesswoman started to get ideas again. “I kind of knew we were going to do a store,” says Wallace. “She has the vision, then I bring the angst and crank out the inventory; but even

though it’s 50/50, Jill runs the show, and she always balances things out.” Also, Jill’s online clothing store, Bunny Jackson, has stayed in business for many years. The above-the-knee, handmade dresses are another custom piece of vintage-esque clothing meshed with a modern approach that Loveworn carries. With Wallace’s passion for historical symbolism and Jill’s business approach, these two vital factors make up Loveworn. Jill strives toward a level of success most people can’t dream of. “Loveworn should be in everyone’s pocket,” she says. “It’s a household name; it just has that feeling. And we want to inspire others as well.” Last week, Jill noticed a teen boy’s admiration for one of the Loveworn jackets that hung in the haven of style. He adored the jacket but didn’t have the money to buy it, so Jill gave a Styling 101 course and showed him how to attach the studs and sew the patches to his own jacket. She even let him use one of the six sewing machines she keeps at the store and taught the inspired teen how to sew and dabble in fashion. Wallace again nods his head. “That’s because we’re not greedy people.”•MJ 5 – 12 July 2018