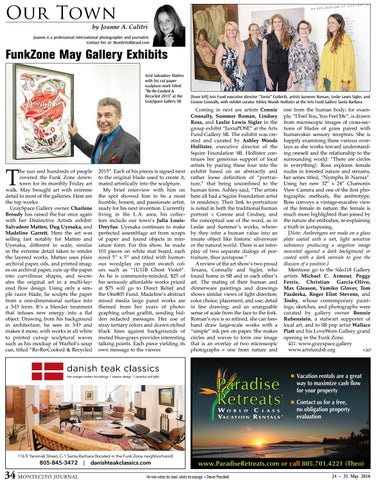 by Joanne A. Calitri

Joanne is a professional international photographer and journalist. Contact her at: BeatArtist8@aol.com

he sun and hundreds of people covered the Funk Zone downtown for its monthly Friday art walk. May brought art with extreme detail to most of the galleries. Here are the top works: GraySpace Gallery owner Charlene Broudy has raised the bar once again with her Distinctive Artists exhibit: Salvadore Matteo, Dug Uyesaka, and Madeline Garrett. Here the art was selling fast notably for Matteo and Uyesaka, different in scale, similar in the extreme detail taken to render the layered works. Matteo uses plain archival paper, oils, and printed images on archival paper, cuts up the paper into curvilinear shapes, and re-creates the original art in a multi-layered flow design. Using only a simple razor blade, he sculpts the paper from a one-dimensional surface into a 3-D form. It’s a blender treatment that infuses new energy into a flat object. Drawing from his background in architecture, he sees in 3-D and makes it more, with works in all white to printed cut-up sculptural waves such as his mockup of Warhol’s soup can, titled “Re-Re-Cooked & Recycled

2015”. Each of his pieces is signed next to the original blade used to create it, mated artistically into the sculpture. My brief interview with him on the spot showed him to be a most humble, honest, and passionate artist, ready for his next invention. Currently living in the L.A. area, his collectors include our town’s Julia LouisDreyfus. Uyesaka continues to make perfected assemblage art from scraps of paper and found objects in miniature form. For this show, he made 101 pieces on white mat board, each sized 5” x 5” and titled with humorous wordplay on paint swatch colors such as “1U11B Ghost Violet”. As he is community-minded, $25 of his seriously affordable works priced at $75 will go to Direct Relief and the One805 Fund. Madeline’s abstract mixed media large panel works are themed from her years of photographing urban graffiti, sending hidden redacted messages. Her use of stray tertiary colors and drawn etched black lines against backgrounds of muted blue-grays provides interesting talking points. Each piece yielding its own message to the viewer.

Coming in next are artists Connie Connally, Summer Roman, Lindsey Ross, and Leslie Lewis Sigler in the group exhibit “JuxtaPOSE” at the Arts Fund Gallery SB. The exhibit was created and curated by Ashley Woods Hollister, executive director of the Squire Foundation SB. Hollister continues her generous support of local artists by pairing these four into the exhibit based on an abstractly and rather loose definition of “portraiture,” that being unconfined to the human form. Ashley said, “The artists here all had a Squire Foundation artist in residency. Their link to portraiture is noted in both the traditional human portrait = Connie and Lindsey, and the conceptual use of the word, as in Leslie and Summer’s works, whereby they infer a human value into an innate object like historic silverware or the natural world. There is an interplay of two separate dialogs of portraiture, thus juxtapose.” A review of the art show’s two proud Texans, Connally and Sigler, who found home in SB and in each other’s art. The mating of their human and dinnerware paintings and drawings shows similar views of light direction; color choice, placement, and use; detail in line drawing; and an unarguable sense of scale from the face to the fork. Roman’s eye is so refined, she can freehand draw large-scale works with a “simple” ink pen on paper. She makes circles and waves to form one image that is an overlay of two microscopic photographs – one from nature and

one from the human body; for example, “I Feel You, You Feel Me”, is drawn from microscopic images of cross-sections of blades of grass paired with human-skin sensory receptors. She is happily examining these various overlays as she works toward understanding oneself and the relationship to the surrounding world: “There are circles in everything!. Ross explores female nudes in forested nature and streams, her series titled, “Nymphs In Narnia”. Using her new 32” x 24” Chamonix View Camera and one of the first photographic methods, the ambrotype, Ross conveys a vintage-macabre view of the female in nature; the female is much more highlighted than joined by the nature she embodies, re-explaining a truth in juxtaposing. [Note: Ambrotypes are made on a glass plate coated with a wet, light sensitive substance producing a negative image mounted against a dark background or coated with a dark varnish to give the illusion of a positive.] Mentions go to the Silo118 Gallery artists Michael C. Armour, Peggy Ferris, Christian Garcia-Olivo, Max Gleason, Yumiko Glover, Tom Pazderka, Roger Eliot Stevens, and Toshy, whose contemporary paintings, sketches, and photographs were curated by gallery owner Bonnie Rubenstein, a stalwart supporter of local art, and to SB pop artist Wallace Piatt and his LoveWorn Gallery grand opening in the Funk Zone. 411: www.grayspace.gallery www.artsfundsb.org •MJ

He who whets his steel, whets his courage. – Steven Pressfield