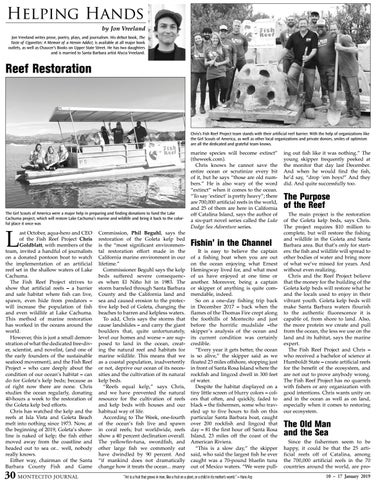 by Jon Vreeland Jon Vreeland writes prose, poetry, plays, and journalism. His debut book, The Taste of Cigarettes: A Memoir of a Heroin Addict, is available at all major book outlets, as well as Chaucer’s Books on Upper State Street. He has two daughters and is married to Santa Barbara artist Alycia Vreeland.

Chris’s Fish Reef Project team stands with their artificial reef barrier. With the help of organizations like the Girl Scouts of America, as well as other local organizations and private donors, smiles of optimism are all the dedicated and grateful team knows.

The Girl Scouts of America were a major help in preparing and finding donations to fund the Lake Cachuma project, which will restore Lake Cachuma’s marine and wildlife and bring it back to the colorful place it once was

ast October, aqua-hero and CEO of the Fish Reef Project Chris Goldblatt, with members of the team, invited a handful of journalists on a donated pontoon boat to watch the implementation of an artificial reef set in the shallow waters of Lake Cachuma. The Fish Reef Project strives to show that artificial reefs – a barrier and safe habitat where fish can live, spawn, even hide from predators – will increase the population of fish and even wildlife at Lake Cachuma. This method of marine restoration has worked in the oceans around the world. However, this is just a small demonstration of what the dedicated free-diver, scientist, and novelist, (and one of the early founders of the sustainable seafood movement), and the Fish Reef Project – who care deeply about the condition of our ocean’s habitat – can do for Goleta’s kelp beds; because as of right now there are none.  Chris studies the ocean regularly, donating 40-hours a week to the restoration of the Goleta kelp bed efforts. Chris has watched the kelp and the reefs at Isla Vista and Goleta Beach melt into nothing since 1973. Now, at the beginning of 2019, Goleta’s shoreline is naked of kelp; the fish either moved away from the coastline and headed out to sea or... well, nobody really knows. Either way, chairman of the Santa Barbara County Fish and Game

Commission, Phil Beguhl, says the restoration of the Goleta kelp bed is the “most significant environmental restoration effort made in the California marine environment in our lifetime.” Commissioner Beguhl says the kelp beds suffered severe consequences when El Niño hit in 1983. The storm barreled through Santa Barbara County and the California land and sea and caused erosion to the protective kelp bed of Goleta, changing the beaches to barren and kelpless waters. To add, Chris says the storms that cause landslides – and carry the giant boulders that, quite unfortunately, level our homes and worse – are supposed to land in the ocean, creating the natural reef and habitats for marine wildlife. This means that we as a coastal population, inadvertently or not, deprive our ocean of its necessities and the cultivation of its natural kelp beds. “Reefs equal kelp,” says Chris, and we have prevented the natural resource for the cultivation of reefs and kelp beds with houses and our habitual way of life. According to The Week, one-fourth of the ocean’s fish live and spawn in coral reefs; but worldwide, reefs show a 40 percent declination overall. The yellowfin-tuna, swordfish, and other large fish we commonly eat have dwindled by 90 percent. And “if mankind does not dramatically change how it treats the ocean... many

marine species will become extinct” (theweek.com). Chris knows he cannot save the entire ocean or scrutinize every bit of it, but he says “those are old numbers.” He is also wary of the word “extinct” when it comes to the ocean. “To say ‘extinct’ is pretty heavy”; there are 700,000 artificial reefs in the world, and 25 of them are here in California off Catalina Island, says the author of a six-part novel series called the Luke Dodge Sea Adventure series.

Fishin’ in the Channel

It is easy to believe the captain of a fishing boat when you are out on the ocean enjoying what Ernest Hemingway lived for, and what most of us have enjoyed at one time or another. Moreover, being a captain or skipper of anything is quite commendable, indeed. So on a one-day fishing trip back in December 2017 – back when the flames of the Thomas Fire crept along the foothills of Montecito and just before the horrific mudslide –the skipper’s analysis of the ocean and its current condition was certainly credible. “Every year it gets better, the ocean is so alive,” the skipper said as we floated 23 miles offshore, stopping just in front of Santa Rosa Island where the rockfish and lingcod dwell in 300 feet of water. Despite the habitat displayed on a tiny little screen of blurry colors – colors that often, and quickly, faded to black – the fishermen, some who traveled up to five hours to fish on this particular Santa Barbara boat, caught over 200 rockfish and lingcod that day – 81 the first hour off Santa Rosa Island, 23 miles off the coast of the American Riviera. “This is a slow day,” the skipper said, who said the largest fish he ever caught was a 70-pound bluefin tuna out of Mexico waters. “We were pull-

“Art is a fruit that grows in man, like a fruit on a plant, or a child in its mother’s womb.” – Hans Arp

ing out fish like it was nothing.” The young skipper frequently peeked at the monitor that day last December. And when he would find the fish, he’d say, “drop ‘em boys!” And they did. And quite successfully too.

The Purpose of the Reef

The main project is the restoration of the Goleta kelp beds, says Chris. The project requires $10 million to complete, but will restore the fishing and wildlife in the Goleta and Santa Barbara area. But that’s only for starters: the fish and wildlife will spread to other bodies of water and bring more of what we’ve missed for years. And without even realizing. Chris and the Reef Project believe that the money for the building of the Goleta kelp beds will restore what he and the locals used to enjoy in their vibrant youth. Goleta kelp beds will make Santa Barbara waters flourish to the authentic fluorescence it is capable of, from shore to land. Also, the more protein we create and pull from the ocean, the less we use on the land and its habitat, says the marine expert. The Fish Reef Project and Chris – who received a bachelor of science at Humboldt State – create artificial reefs for the benefit of the ecosystem, and are not out to prove anybody wrong. The Fish Reef Project has no quarrels with fishers or any organization with good intentions. Chris wants unity on and in the ocean as well as on land, especially when it comes to restoring our ecosystem.

The Old Man and the Sea

Since the fishermen seem to be happy, it could be that the 25 artificial reefs off of Catalina, among the 700,000 artificial reefs in the 70 countries around the world, are pro10 – 17 January 2019