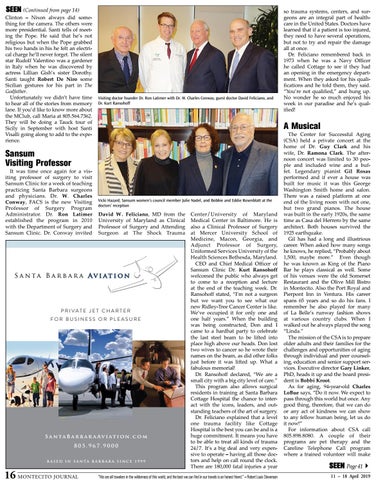 Clinton – Nixon always did something for the camera. The others were more presidential. Santi tells of meeting the Pope. He said that he’s not religious but when the Pope grabbed his two hands in his he felt an electrical charge he’ll never forget. The silent star Rudolf Valentino was a gardener in Italy when he was discovered by actress Lillian Gish’s sister Dorothy. Santi taught Robert De Niro some Sicilian gestures for his part in The Godfather. Unfortunately we didn’t have time to hear all of the stories from memory lane. If you’d like to know more about the MClub, call Maria at 805.564.7362. They will be doing a Tauck tour of Sicily in September with host Santi Visalli going along to add to the experience.

It was time once again for a visiting professor of surgery to visit Sansum Clinic for a week of teaching practicing Santa Barbara surgeons and physicians. Dr. W. Charles Conway, FACS is the new Visiting Professor of Surgery Program Administrator. Dr. Ron Latimer established the program in 2010 with the Department of Surgery and Sansum Clinic. Dr. Conway invited

David W . Feliciano, MD from the University of Maryland as Clinical Professor of Surgery and Attending Surgeon at The Shock Trauma

The Center for Successful Aging (CSA) held a private concert at the home of Dr. Guy Clark and his wife, Dr. Ramona Clark. The afternoon concert was limited to 30 people and included wine and a buffet. Legendary pianist Gil Rosas performed and if ever a house was built for music it was this George Washington Smith home and salon. There was a raised platform at one end of the living room with not one, but two grand pianos. The house was built in the early 1920s, the same time as Casa del Herrero by the same architect. Both houses survived the 1925 earthquake. Gil has had a long and illustrious career. When asked how many songs he knows, he replied, “Probably about 1,500, maybe more.” Even though he was known as King of the Piano Bar he plays classical as well. Some of his venues were the old Somerset Restaurant and the Olive Mill Bistro in Montecito. Also the Port Royal and Pierpont Inn in Ventura. His career spans 65 years and so do his fans. I remember he also played for many of La Belle’s runway fashion shows at various country clubs. When I walked out he always played the song “Linda.” The mission of the CSA is to prepare older adults and their families for the challenges and opportunities of aging through individual and peer counseling, education and senior support services. Executive director Gary Linker, PhD, heads it up and the board president is Bobbi Kroot. As for aging, 94-year-old Charles LoBue says, “Do it now. We expect to pass through this world but once. Any good thing, therefore, that we can do or any act of kindness we can show to any fellow human being, let us do it now!” For information about CSA call 805.898.8080. A couple of their programs are pet therapy and the Careline Telephone Call program where a trained volunteer will make

Center/University of Maryland Medical Center in Baltimore. He is also a Clinical Professor of Surgery at Mercer University School of Medicine, Macon, Georgia, and Adjunct Professor of Surgery, Uniformed Services University of the Health Sciences Bethesda, Maryland. CEO and Chief Medical Officer of Sansum Clinic Dr. Kurt Ransohoff welcomed the public who always get to come to a reception and lecture at the end of the teaching week. Dr. Ransohoff stated, “I’m not a surgeon but we want you to see what our new Ridley-Tree Cancer Center is like. We’ve occupied it for only one and one half years.” When the building was being constructed, Don and I came to a hardhat party to celebrate the last steel beam to be lifted into place high above our heads. Don lost two wives to cancer so he wrote their names on the beam, as did other folks just before it was lifted up. What a fabulous memorial! Dr. Ransohoff declared, “We are a small city with a big city level of care.” This program also allows surgical residents in training at Santa Barbara Cottage Hospital the chance to interact with the icons, leaders, and outstanding teachers of the art of surgery. Dr. Feliciano explained that a level one trauma facility like Cottage Hospital is the best you can be and is a huge commitment. It means you have to be able to treat all kinds of trauma 24/7. It’s a big deal and very expensive to operate – having all those doctors and help on call round the clock. There are 180,000 fatal injuries a year

 “We are all travelers in the wilderness of this world, and the best we can find in our travels is an honest friend.” – Robert Louis Stevenson

so trauma systems, centers, and surgeons are an integral part of healthcare in the United States. Doctors have learned that if a patient is too injured, they need to have several operations, but not to try and repair the damage all at once. Dr. Feliciano remembered back in 1973 when he was a Navy Officer he called Cottage to see if they had an opening in the emergency department. When they asked for his qualifications and he told them, they said. “You’re not qualified,” and hung up. No wonder he so much enjoyed his week in our paradise and he’s qualified!

Let's Get Ready to Rally!

Let's Get Ready to Rally!