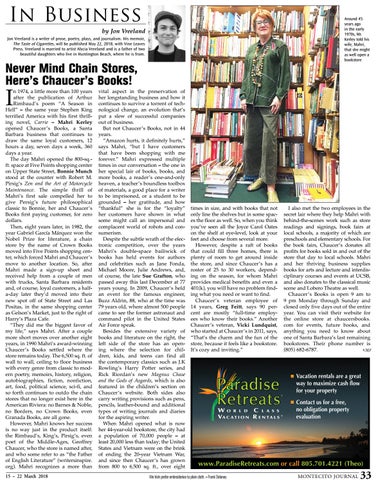 Around 45 years ago in the early 1970s, Mr. Kerley told his wife, Mahri, that she might as well open a bookstore

Jon Vreeland is a writer of prose, poetry, plays, and journalism. His memoir, The Taste of Cigarettes, will be published May 22, 2018, with Vine Leaves Press. Vreeland is married to artist Alycia Vreeland and is a father of two beautiful daughters who live in Huntington Beach, where he is from.

n 1974, a little more than 100 years after the publication of Arthur Rimbaud’s poem “A Season in Hell” – the same year Stephen King terrified America with his first thrilling novel, Carrie – Mahri Kerley opened Chaucer’s Books, a Santa Barbara business that continues to draw the same loyal customers, 12 hours a day, seven days a week, 360 days a year. The day Mahri opened the 800-sq.ft. space at Five Points shopping center on Upper State Street, Bonnie Munch stood at the counter with Robert M. Pirsig’s Zen and the Art of Motorcycle Maintenance. The simple thrill of Mahri’s first sale compelled her to give Persig’s future philosophical classic to Bonnie, her and Chaucer’s Books first paying customer, for zero dollars. Then, eight years later, in 1982, the year Gabriel García Márquez won the Nobel Prize for literature, a chain store by the name of Crown Books moved into Five Points shopping center, which forced Mahri and Chaucer’s move to another location. So, after Mahri made a sign-up sheet and received help from a couple of men with trucks, Santa Barbara residents and, of course, loyal customers, a halfa-day later they’d moved into their new spot off of State Street and Las Positas, in the same shopping center as Gelson’s Market, just to the right of Harry’s Plaza Cafe. “They did me the biggest favor of my life,” says Mahri. After a couple more short moves over another eight years, in 1990 Mahri’s award-winning Chaucer’s Books settled where the store remains today. The 6,500 sq. ft. of wall to wall, ceiling to floor business with every genre from classic to modern poetry, memoirs, history, religion, autobiographies, fiction, nonfiction, art, food, political science, sci-fi, and so forth continues to outdo the chain stores that no longer exist here in the American Riviera: no Barnes & Noble, no Borders, no Crown Books, even Granada Books, are all gone. However, Mahri knows her success is no way just in the product itself: the Rimbaud’s, King’s, Pirsig’s, even poet of the Middle-Ages, Geoffrey Chaucer, who the store is named after, and who some refer to as “the Father of English Literature” (writersinspire. org). Mahri recognizes a more than 15 – 22 March 2018

vital aspect in the preservation of her longstanding business and how it continues to survive a torrent of technological change, an evolution that’s put a slew of successful companies out of business. But not Chaucer’s Books, not in 44 years. “Amazon hurts, it definitely hurts,” says Mahri, “but I have customers that have been shopping with me forever.” Mahri expressed multiple times in our conversation – the one in her special lair of books, books, and more books, a reader’s one-and-only heaven, a teacher’s boundless toolbox of materials, a good place for a writer to be imprisoned, or a student to be grounded – her gratitude, and how “thankful” she is for the “loyalty” her customers have shown in what some might call an impersonal and complacent world of robots and consumerism. Despite the subtle wrath of the electronic competition, over the years Mahri’s double-space bailiwick of books has held events for authors and celebrities such as Jane Fonda, Michael Moore, Julie Andrews, and, of course, the late Sue Grafton, who passed away this last December at 77 years young. In 2009, Chaucer’s held an event for the famous engineer, Buzz Aldrin, 88, who at the time was 79 years old, where almost 500 people came to see the former astronaut and command pilot in the United States Air Force speak. Besides the extensive variety of books and literature on the right, the left side of the store has an opening where the selection for children, kids, and teens can find all the contemporary classics such as J.K Rowling’s Harry Potter series, and Rick Riordan’s new Magnus Chase and the Gods of Asgards, which is also featured in the children’s section on Chaucer’s website. Both sides also carry writing provisions such as pens, pencils, leather-bound and additional types of writing journals and diaries for the aspiring writer. When Mahri opened what is now her 44-year-old bookstore, the city had a population of 70,000 people – at least 20,000 less than today; the United States and Vietnam were on the brink of ending the 20-year Vietnam War, and since then Chaucer’s has grown from 800 to 6,500 sq. ft., over eight

times in size, and with books that not only line the shelves but in some spaces the floor as well. So, when you think you’ve seen all the Joyce Carol Oates on the shelf at eye-level, look at your feet and choose from several more. However, despite a raft of books that could fill three homes, there is plenty of room to get around inside the store, and since Chaucer’s has a roster of 25 to 30 workers, depending on the season, for whom Mahri provides medical benefits and even a 401(k), you will have no problem finding what you need or want to find. Chaucer’s veteran employee of 14 years, Greg Feitt, says 90 percent are mostly “full-time employees who know their books.” Another Chaucer’s veteran, Vicki Lundquist, who started at Chaucer’s in 2011, says, “That’s the charm and the fun of the store, because it feels like a bookstore. It’s cozy and inviting.”

I also met the two employees in the secret lair where they help Mahri with behind-the-scenes work such as store readings and signings, book fairs at local schools, a majority of which are preschools and elementary schools. For the book fairs, Chaucer’s donates all profits for books sold in and out of the store that day to local schools. Mahri and her thriving business supplies books for arts and lecture and interdisciplinary courses and events at UCSB, and also donates to the classical music scene and Lobero Theatre as well. Chaucer’s Books is open 9 am to 9 pm Monday through Sunday and closed only five days out of the entire year. You can visit their website for the online store at chaucersbooks. com for events, future books, and anything you need to know about one of Santa Barbara’s last remaining bookstores. Their phone number is (805) 682-6787. •MJ