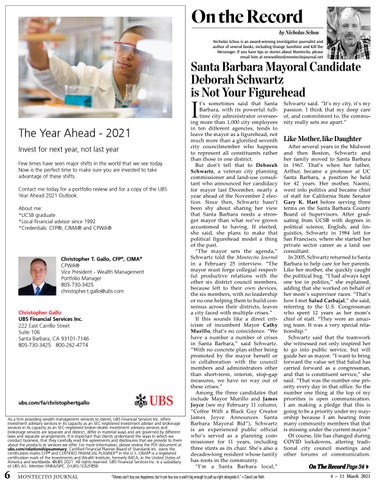 Nicholas Schou is an award-winning investigative journalist and author of several books, including Orange Sunshine and Kill the Messenger. If you have tips or stories about Montecito, please email him at newseditor@montecitojournal.net

Santa Barbara Mayoral Candidate Deborah Schwartz is Not Your Figurehead

The Year Ahead - 2021 Invest for next year, not last year Few times have seen major shifts in the world that we see today. Now is the perfect time to make sure you are invested to take advantage of these shifts. Contact me today for a portfolio review and for a copy of the UBS Year Ahead 2021 Outlook. About me: *UCSB graduate *Local ﬁnancial advisor since 1992 *Credentials: CFP®, CIMA® and CPWA®

ubs.com/fa/christophertgallo As a ﬁrm providing wealth management services to clients, UBS Financial Services Inc. offers investment advisory services in its capacity as an SEC-registered investment adviser and brokerage services in its capacity as an SEC-registered broker-dealer. Investment advisory services and brokerage services are separate and distinct, differ in material ways and are governed by different laws and separate arrangements. It is important that clients understand the ways in which we conduct business, that they carefully read the agreements and disclosures that we provide to them about the products or services we offer. For more information, please review the PDF document at ubs.com/relationshipsummary. Certiﬁed Financial Planner Board of Standards Inc. owns the certiﬁcation marks CFP® and CERTIFIED FINANCIAL PLANNER™ in the U.S. CIMA® is a registered certiﬁcation mark of the Investments and Wealth Institute, formerly IMCA, in the United States of America and worldwide. ©UBS 2021. All rights reserved. UBS Financial Services Inc. is a subsidiary of UBS AG. Member FINRA/SIPC. D-UBS-1EA2F85B

t’s sometimes said that Santa Barbara, with its powerful fulltime city administrator overseeing more than 1,000 city employees in ten different agencies, tends to leave the mayor as a figurehead, not much more than a glorified seventh city councilmember who happens to represent all constituents rather than those in one district. But don’t tell that to Deborah Schwartz, a veteran city planning commissioner and land-use consultant who announced her candidacy for mayor last December, nearly a year ahead of the November 2 election. Since then, Schwartz hasn’t been shy about sharing her view that Santa Barbara needs a stronger mayor than what we’ve grown accustomed to having. If elected, she said, she plans to make that political figurehead model a thing of the past. “The mayor sets the agenda,” Schwartz told the Montecito Journal in a February 25 interview. “The mayor must forge collegial respectful productive relations with the other six district council members, because left to their own devices, the six members, with no leadership or no one helping them to build consensus across their districts, leaves a city faced with multiple crises.” If this sounds like a direct criticism of incumbent Mayor Cathy Murillo, that’s no coincidence. “We have a number a number of crises in Santa Barbara,” said Schwartz. “With no concrete plan either being promoted by the mayor herself or in collaboration with the council members and administrators other than short-term, interim, stop-gap measures, we have no way out of these crises.” Among the three candidates that include Mayor Murillo and James Joyce (see my February 11 column, “Coffee With a Black Guy Creator James Joyce Announces Santa Barbara Mayoral Bid”), Schwartz is an experienced public official who’s served as a planning commissioner for 11 years, including three stints as its chair. She’s also a decades-long resident whose family has roots in the community. “I’m a Santa Barbara local,”

“Money can’t buy you happiness, but it can buy you a yacht big enough to pull up right alongside it.” – David Lee Roth

Schwartz said. “It’s my city, it’s my passion. I think that my deep care of, and commitment to, the community really sets me apart.”

After several years in the Midwest and then Boston, Schwartz and her family moved to Santa Barbara in 1967. That’s when her father, Arthur, became a professor at UC Santa Barbara, a position he held for 42 years. Her mother, Naomi, went into politics and became chief of staff for California State Senator Gary K. Hart before serving three terms on the Santa Barbara County Board of Supervisors. After graduating from UCSB with degrees in political science, English, and linguistics, Schwartz in 1984 left for San Francisco, where she started her private sector career as a land use consultant. In 2005, Schwartz returned to Santa Barbara to help care for her parents. Like her mother, she quickly caught the political bug. “I had always kept one toe in politics,” she explained, adding that she worked on behalf of her mom’s supervisor races. “That’s how I met Salud Carbajal,” she said, referring to the U.S. Congressman who spent 12 years as her mom’s chief of staff. “They were an amazing team. It was a very special relationship.” Schwartz said that the teamwork she witnessed not only inspired her to go into public service, but will guide her as mayor. “I want to bring forward the value set that Salud has carried forward as a congressman, and that is constituent service,” she said. “That was the number one priority every day in that office. So the number one thing at the top of my priorities is open communication. I am making a pledge that this is going to be a priority under my mayorship because I am hearing from many community members that that is missing under the current mayor.” Of course, life has changed during COVID lockdowns, altering traditional city council meetings and other forums of communication.