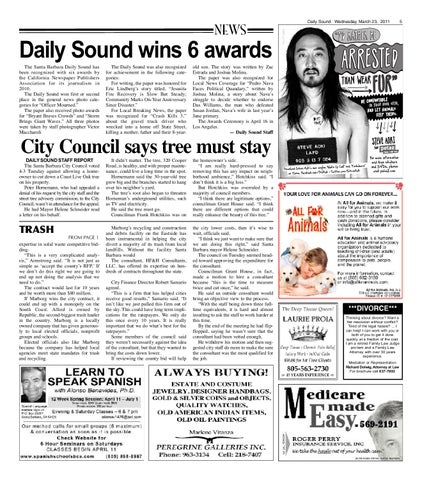 The Daily Sound was also recognized for achievement in the following categories: For writing, the paper was honored for Eric Lindberg’s story titled, “Jesusita Fire Recovery is Slow But Steady; Community Marks On-Year Anniversary Since Disaster.” For Local Breaking News, the paper was recognized for “Crash Kills 3,” about the gravel truck driver who wrecked into a home off State Street, killing a mother, father and their 8-year-

DAILY SOUND STAFF REPORT The Santa Barbara City Council voted 4-3 Tuesday against allowing a homeowner to cut down a Coast Live Oak tree on his property. Peter Hornemann, who had appealed a denial of his request by the city staff and the street tree advisory commission, to the City Council, wasn’t in attendance for the appeal. He had Mayor Helene Schneider read a letter on his behalf.

It didn’t matter. The tree, 320 Cooper Road, is healthy, and with proper maintenance, could live a long time in the spot. Hornemann said the 30-year-old tree grew big and the branches started to hang over his neighbor’s yard. The tree’s root also began to threaten Horneman’s underground utilities, such as TV and electricity. He said the tree must go. Councilman Frank Hotchkiss was on

the homeowner’s side. “I am really hard-pressed to say removing this has any impact on neighborhood ambience,” Hotchkiss said. “I don’t think it is a big loss.” But Hotchkiss was overruled by a majority of council members. “I think there are legitimate options,” councilman Grant House said. “I think there are different options that could really enhance the beauty of this tree.”

FROM PAGE 1 expertise in solid waste competitive bidding. “This is a very complicated analysis,” Armstrong said. “It is not just as simple as ‘accept the county’s RFP.’ If we don’t do this right we are going to end up not doing the analysis that we need to do.” The contract would last for 10 years and be worth more than $80 million. If Marborg wins the city contract, it could end up with a monopoly on the South Coast. Allied is owned by Republic, the second-biggest trash hauler in the country. Marborg is a locally owned company that has given generously to local elected officials, nonprofit groups and schools. Elected officials also like Marborg because the company has helped local agencies meet state mandates for trash and recycling.

Marborg’s recycling and construction and debris facility on the Eastside has been instrumental in helping the city divert a majority of its trash from local landfills. Without the facility Santa Barbara would The consultant, HF&H Consultants, LLC. has offered its expertise on hundreds of contracts throughout the state.

City Finance Director Robert Samario agreed. “This is a firm that has helped cities receive good results,” Samario said. “It isn’t like we just pulled this firm out of the sky. This could have long term implications for the ratepayers. We only do this once every 10 years. It is really important that we do what’s best for the ratepayers.” Some members of the council said they weren’t necessarily against the idea of the consultant, but that they wanted to bring the costs down lower. If reviewing the county bid will help

the city lower costs, then it’s wise to wait, officials said. “I think we just want to make sure that we are doing this right,” said Santa Barbara mayor Helene Schneider. The council on Tuesday seemed headed toward approving the expenditure for the consultant. Councilman Grant House, in fact, made a motion to hire a consultant because “this is the time to measure twice and cut once,” he said. He said an outside consultant would bring an objective view to the process. “With the staff being down three fulltime equivalents, it is hard and almost insulting to ask the staff to work harder at this time. By the end of the meeting he had flipflopped, saying he wasn’t sure that the consultant had been vetted enough. He withdrew his motion and then suggested city staff do more to make the sure the consultant was the most qualified for the job.

Thinking about divorce? Want a fair resolution without conflict? Tired of the legal hassle? ... I can help! I can work with you or both of you to get it done quickly..at a fraction of the cost. I am a retired Family Law Judge pro-tem and a Family Law Attorney with over 30 years experience. Mediation or Representation Richard Dolwig, Attorney at Law For brochure call 637-7993 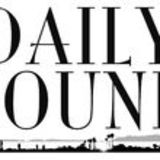