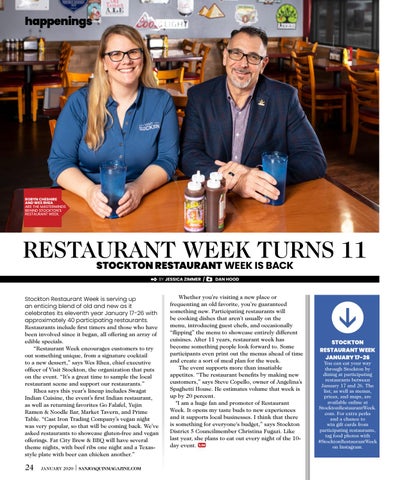 ROBYN CHESHIRE AND WES RHEA ARE THE MASTERMINDS BEHIND STOCKTON'S RESTAURANT WEEK.

Stockton Restaurant Week is serving up an enticing blend of old and new as it celebrates its eleventh year January 17-26 with approximately 40 participating restaurants. Restaurants include first timers and those who have been involved since it began, all offering an array of edible specials. “Restaurant Week encourages customers to try out something unique, from a signature cocktail to a new dessert,” says Wes Rhea, chief executive officer of Visit Stockton, the organization that puts on the event. “It’s a great time to sample the local restaurant scene and support our restaurants.” Rhea says this year’s lineup includes Swagat Indian Cuisine, the event’s first Indian restaurant, as well as returning favorites Go Falafel, Yujin Ramen & Noodle Bar, Market Tavern, and Prime Table. “Cast Iron Trading Company’s vegan night was very popular, so that will be coming back. We’ve asked restaurants to showcase gluten-free and vegan offerings. Fat City Brew & BBQ will have several theme nights, with beef ribs one night and a Texasstyle plate with beer can chicken another.”

Whether you’re visiting a new place or frequenting an old favorite, you’re guaranteed something new. Participating restaurants will be cooking dishes that aren’t usually on the menu, introducing guest chefs, and occasionally “flipping” the menu to showcase entirely different cuisines. After 11 years, restaurant week has become something people look forward to. Some participants even print out the menus ahead of time and create a sort of meal plan for the week. The event supports more than insatiable appetites. “The restaurant benefits by making new customers,” says Steve Copello, owner of Angelina’s Spaghetti House. He estimates volume that week is up by 20 percent. "I am a huge fan and promoter of Restaurant Week. It opens my taste buds to new experiences and it supports local businesses. I think that there is something for everyone's budget,” says Stockton District 5 Councilmember Christina Fugazi. Like last year, she plans to eat out every night of the 10day event. 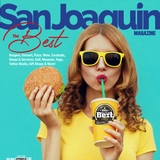