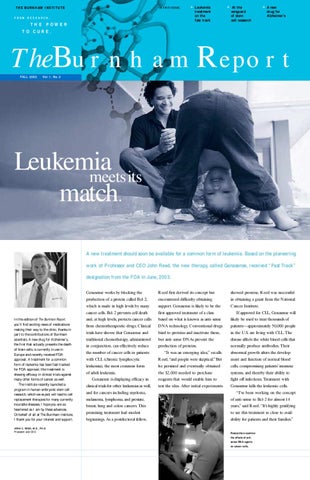 &gt; At the vanguard of stem cell research

&gt; A new drug for Alzheimer’s

THE POWER TO CURE.

Leukemia meets its match. A new treatment should soon be available for a common form of leukemia. Based on the pioneering work of Professor and CEO John Reed, the new therapy, called Genasense, received “Fast Track” designation from the FDA in June, 2003.

In this edition of The Burnham Report, you’ll find exciting news of medications making their way to the clinic, thanks in part to the contributions of Burnham scientists. A new drug for Alzheimer’s, the first that actually prevents the death of brain cells, is currently in use in Europe and recently received FDA approval. A treatment for a common form of leukemia has been fast-tracked for FDA approval; this treatment is showing efficacy in clinical trials against many other forms of cancer as well. The Institute recently launched a program in human embryonic stem cell research, which we expect will lead to cell replacement therapies for many currently incurable diseases. I hope you are as heartened as I am by these advances. On behalf of all at The Burnham Institute, I thank you for your interest and support.

Genasense works by blocking the

Reed first derived its concept but

production of a protein called Bcl-2,

in obtaining a grant from the National

which is made in high levels by many

support. Genasense is likely to be the

first approved treatment of a class

based on what is known as anti-sense

likely be used to treat thousands of

trials have shown that Genasense and

bind to proteins and inactivate them,

in the U.S. are living with CLL. The

but anti-sense DNAs prevent the

in conjunction, can effectively reduce

the number of cancer cells in patients

If approved for CLL, Genasense will

“It was an emerging idea,” recalls

Reed, “and people were skeptical.” But

ment and function of normal blood

leukemia), the most common form

he persisted and eventually obtained

systems, and thereby their ability to

reagents that would enable him to

fight off infections. Treatment with

test the idea. After initial experiments

Genasense is displaying efficacy in clinical trials for other leukemias as well, and for cancers including myeloma,

“I’ve been working on the concept

breast, lung and colon cancers. This

to see this treatment so close to avail-

beginnings. As a postdoctoral fellow,

ability for patients and their families.”

A new treatment should soon be available for a common form of leukemia.Based on the pioneering work of Professor and CEO John Reed,the new therapy,called Genasense,received “Fast Track” designation from the FDA in June,2003. At the vanguard of stem cell research A new drug for Alzheimer’s THE BURNHAM INSTITUTE Leukemia treatment on the fast track FROM RESEARCH, FALL 2003 Vol.1,No.2 Researchers examine the effectsof anti- sense DNA agents on cancer cells. IN THIS ISSUE: President and CEO 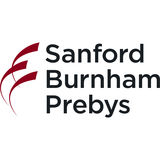