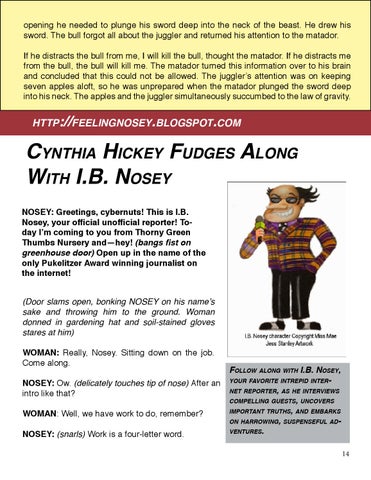 opening he needed to plunge his sword deep into the neck of the beast. He drew his sword. The bull forgot all about the juggler and returned his attention to the matador. If he distracts the bull from me, I will kill the bull, thought the matador. If he distracts me from the bull, the bull will kill me. The matador turned this information over to his brain and concluded that this could not be allowed. The juggler’s attention was on keeping seven apples aloft, so he was unprepared when the matador plunged the sword deep into his neck. The apples and the juggler simultaneously succumbed to the law of gravity.

Cynthia Hickey Fudges Along With I.B. Nosey NOSEY: Greetings, cybernuts! This is I.B. Nosey, your official unofficial reporter! Today I’m coming to you from Thorny Green Thumbs Nursery and—hey! (bangs fist on greenhouse door) Open up in the name of the only Pukelitzer Award winning journalist on the internet! (Door slams open, bonking NOSEY on his name’s sake and throwing him to the ground. Woman donned in gardening hat and soil-stained gloves stares at him) WOMAN: Really, Nosey. Sitting down on the job. Come along. NOSEY: Ow. (delicately touches tip of nose) After an intro like that? WOMAN: Well, we have work to do, remember? NOSEY: (snarls) Work is a four-letter word. 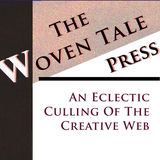 An Eclectic Culling of the Creative Web. This month: Astropoetry, Dead Things, Mr. Nosey and More

An Eclectic Culling of the Creative Web. This month: Astropoetry, Dead Things, Mr. Nosey and More