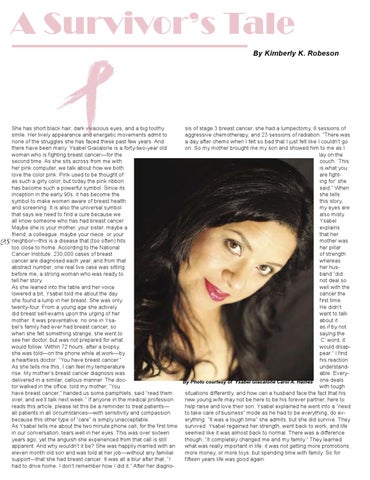 She has short black hair, dark vivacious eyes, and a big toothy smile. Her lively appearance and energetic movements admit to none of the struggles she has faced these past few years. And there have been many. Ysabel Giacalone is a forty-two-year old woman who is fighting breast cancer—for the second time. As she sits across from me with her pink computer, we talk about how we both love the color pink. Pink used to be thought of as such a girly color, but today the pink ribbon has become such a powerful symbol: Since its inception in the early 90s, it has become the symbol to make women aware of breast health and screening. It is also the universal symbol that says we need to find a cure because we all know someone who has had breast cancer. Maybe she is your mother, your sister, maybe a friend, a colleague, maybe your niece, or your neighbor—this is a disease that (too often) hits too close to home. According to the National Cancer Institute, 230,000 cases of breast cancer are diagnosed each year, and from that abstract number, one real live case was sitting before me, a strong woman who was ready to tell her story. As she leaned into the table and her voice lowered a bit, Ysabel told me about the day she found a lump in her breast. She was only twenty-four. From a young age she actively did breast self-exams upon the urging of her mother. It was preventative; no one in Ysabel’s family had ever had breast cancer, so when she felt something strange, she went to see her doctor, but was not prepared for what would follow. Within 72 hours, after a biopsy, she was told—on the phone while at work—by a heartless doctor: “You have breast cancer.” As she tells me this, I can feel my temperature rise. My mother’s breast cancer diagnosis was delivered in a similar, callous manner. The doctor walked in the office, told my mother, “You have breast cancer,” handed us some pamphlets, said “read them over, and we’ll talk next week.” If anyone in the medical profession reads this article, please let this be a reminder to treat patients— all patients in all circumstances—with sensitivity and compassion because this other type of “care” is simply unacceptable. As Ysabel tells me about the two minute phone call, for the first time in our conversation, tears well in her eyes. This was over sixteen years ago, yet the anguish she experienced from that call is still apparent. And why wouldn’t it be? She was happily married with an eleven month old son and was told at her job—without any familial support—that she had breast cancer. It was all a blur after that, “I had to drive home. I don’t remember how I did it.” After her diagno-

sis of stage 3 breast cancer, she had a lumpectomy, 8 sessions of aggressive chemotherapy, and 23 sessions of radiation. “There was a day after chemo when I felt so bad that I just felt like I couldn’t go on. So my mother brought me my son and showed him to me as I lay on the couch. ‘This is what you are fighting for’ she said.” When she tells this story, my eyes are also misty. Ysabel explains that her mother was her pillar of strength whereas her husband “did not deal so well with the cancer the first time. He didn’t want to talk about it . . . as if by not saying the ‘C’ word, it would disappear.” I find his reaction understandable. Everyone deals with tough situations differently, and how can a husband face the fact that his new young wife may not be here to be his forever partner, here to help raise and love their son. Ysabel explained he went into a “need to take care of business” mode as he had to be everything, do everything. “It was a tough time” she admits, but she did survive. They survived. Ysabel regained her strength, went back to work, and life seemed like it was almost back to normal. There was a difference though, “It completely changed me and my family.” They learned what was really important in life: it was not getting more promotions, more money, or more toys, but spending time with family. So for fifteen years life was good again.